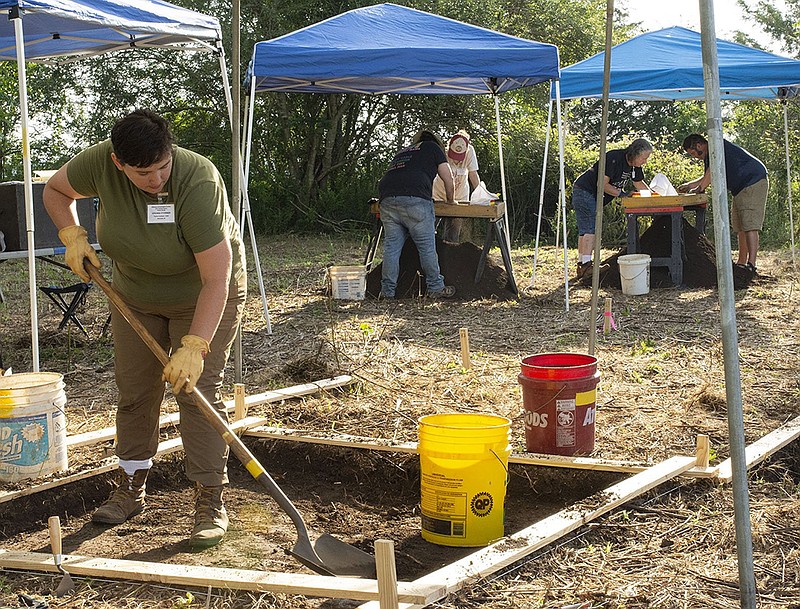 The Arkansas Archeological Survey is hosting a Public Archeology Day in Little Rock on Saturday, and archaeology organizations from the region will be on hand for discussions and activities that focus on different aspects of archaeological research, from stone tools, pottery, archaeogeophysics and animal bones, to archaeological equipment, 3D prints and historic preservation.

Attendees can visit the Old State House Museum in downtown Little Rock at any point between 10 a.m. and 2 p.m., said Michelle Rathgaber, educational outreach coordinator for the Arkansas Archeological Survey, which is part of the University of Arkansas System. There will be brief presentations -- 10 to15 minutes -- by experts on various topics. Visitors can go to different booths to dive deeper into particular areas of interest.

"You don't have to be an expert; just come and learn," she said. In fact, one topic at Public Archeology Day will be "What is an artifact, and what do I do if I find one?"

And the experts are definitely "approachable," said State Archeologist Melissa Zabecki. "They're happy to talk to you." Archaeology is a special type of science, she said, and "part of our mission is to share what we learn with the public."

Attendees can also see how archaeologists use the latest technology to examine sites before doing any digging at all, Rathgaber said. "We don't dig empty sites anymore."

Archaeology is just about everywhere in Arkansas, Rathgaber said. Eastern Arkansas, for example, has been a treasure trove of pottery, while the Ozarks region offers "lots of bluff shelters with well-preserved materials."

Many archaeological sites in Arkansas are public, and "there's so much under the ground we can still learn about," Zabecki said.

"We have history from the state's earliest inhabitants up to 50 years ago, and people can visit them."

Rathgaber's own research has focused on eastern Arkansas in the 1500s, and how residents of that region dealt with a series of modest earthquakes hundreds of years before three major quakes between 1811 and 1812 shook the area, she said. "The people were resilient [in that] seismic zone."

Alex Barker, director of the Arkansas Archeological Survey, said that stewardship, preservation and conservation of historic sites "are an irreplaceable resource."

"In Arkansas, history goes back 13,000 years, and we want to preserve the past for the future," said Barker, who has a doctorate in anthropology from the University of Michigan and served 14 years as director of the Museum of Art & Archaeology at the University of Missouri before coming to Arkansas. "Knowledge of the past is very important -- our heritage [influences] who we are in the present -- it matters to everybody."

People "always imagine the past," but that imagination doesn't always match reality due to a paucity of knowledge, Barker added. When archaeological work is shared with the public, people can have a better understanding of the past, he said.

Public education is crucial to archaeology, and recent developments will naturally be part of the discussion at Public Archeology Day, such as the recently announced name change for Toltec Mounds Archeologic State Park, Barker said.

The National Historic Landmark in Scott, which features an 18-mound complex with the tallest surviving prehistoric mounds in Arkansas, dates to the Late Woodland Period in the state and will be known as Plum Bayou Mounds Archeological State Park.

"There's a long history at that site, and it's a great story," Barker said. The name change corrects an error, as archaeologists have discovered the site should not be identified with the Toltec of Mexico, but, rather, Plum Bayou Culture, a Pre-Columbian American Indian culture that lived in what is now east-central Arkansas from 650–1050 CE (Common Era) and built the mounds.

Public Archeology Day is being held in conjunction with the Southeastern Archaeological Conference, an annual regional meeting of archaeologists that hasn't been held in Arkansas in more than a decade, Rathgaber said.

The Southeastern Archaeological Conference will host a Native Art Market in the Doubletree Hotel next to the museum on Nov. 11 and 12, according to Rathgaber.

A similar art market connected to the Southeastern Archaeological Conference in Tulsa, Okla., a few years ago drew a plethora of native artists, and "it was great," he said.

The public can also browse books on archaeology and history from all over the country those same days at the Doubletree, Zabecki said.

Print Headline: Archeology Day in Little Rock gives visitors peek into the past