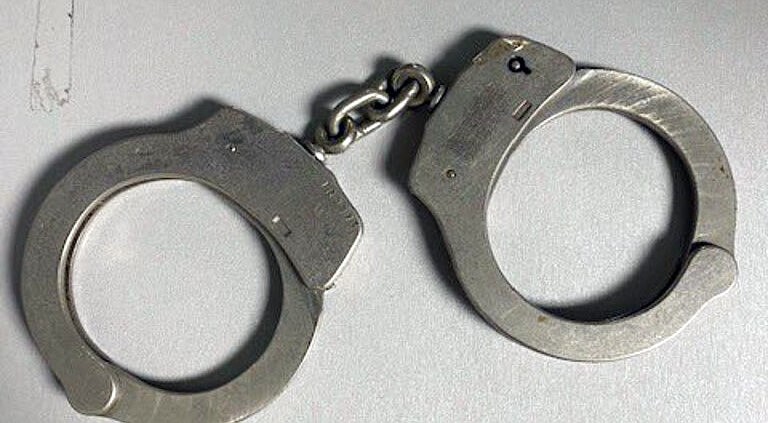 A pair of handcuffs are shown in this undated photo. (Los Angeles Police Department via AP)

A 49-year-old Mountain View man facing misdemeanor harassment and felony threatening charges in two counties was the subject of a manhunt Monday after a Saline County circuit judge reported receiving disturbing emails and voice messages from him.

In Pulaski County, Mitchell Steven Wine is charged with three counts of terroristic threatening, two of them felony charges, over emails Arkansas State Police say he sent to State Claims Commission officials in August 2020, as well as voicemails and texts received earlier this year by his now-former lawyer, after Wine and the attorney disagreed about legal strategy.

On Monday, Wine was wanted in Saline County on a misdemeanor charge of harassing communications, which carries up to a year in jail, based on a complaint by Judge Brent Houston. Houston had been presiding over a harassing communications case involving an email Wine is accused of sending to attorney Chris Madison, legal counsel for the State Board of Election Supervisors, in August 2020.

On Wednesday, Houston ordered Wine's arrest after Saline County prosecutors received information that Wine had made comments about subjecting a State Hospital doctor to a citizen's arrest, with a reference to handcuffs, court filings show. He's been court-ordered to stay away from the doctor, Rachel Fazio, for reasons that were not immediately clear.

The prosecutors also reported that Wine violated orders against contacting other parties by trying to subpoena them and sent the prosecutors a menacing email about Madison, court filings show. The prosecutors asked that Houston order Wine's arrest that same day, which he did.

"Defendant is a danger to Fazio and Madison," Saline County deputy prosecutor Brian Clary stated in the motion for Wine's arrest.

Houston reported that the night after he ordered Wine's arrest, Wine emailed him more than once after midnight, describing the judge as "a punk" and "piece of s--t", court filings show. Wine also reportedly twice called the judge's home during that time frame.

"If you want me incarcerated, why not come get me yourself?" one of the emails attributed to Wine states. Another message says, "Open your mouth, fat boy. Open that mouth, see what you get," court records show.

The judge's complaint formed the basis for the current harassment warrant. Plus, the messages came about a week after the judge told Wine, who is acting as his own lawyer, to stop contacting him directly about the criminal case, telling Wine in an email that communications with the court must be restricted to scheduling matters and should be routed through his assistant, according to court records. The judge has since recused himself from Wine's case.

Court records show that the Saline County case stems from August 2020 emails received by Madison, the election commissioners lawyer, that lists his address, references citizen's arrest and use of force during an arrest. According to an arrest affidavit by the Arkansas State Police, Madison was investigating Wine in an undisclosed dispute with the commission.

"To the degree anyone has committed a felony and doesn't want me to pursue them into their homes, you should talk to LE [law enforcement] or the prosecutor," one email states.

The felony threatening charges in Pulaski County are based on August 2020 emails received by Katheryn Irby, the director of the State Claims Commission, and the commission's co-chair, Henry Kinslow, according to arrest affidavits.

The communication involves Wine's separate claims against his former employer, the Arkansas Game and Fish Commission, and the Department of Finance and Administration related to the denial of his application for a medical marijuana dispensary permit. Madison, with the election commission, was included in the communication.

"You're not putting your hands on me through your subordinates/affiliates any longer without significant repercussions," the email states. "I'll preface any answer by stating I mean nothing unlawful. I will only use force as permitted by law and only if you refuse to settle things amicably."

The criminal case has been further expanded to include a misdemeanor threatening charge, involving text message, emails and voicemails Wine is accused of sending his own lawyer in March after their disagreement on legal strategy, court records show.

"Mr. Wine ... informed me of certain topics that he wanted me to bring up. These topics were inappropriate, and I told Mr. Wine that I would never bring those topics up in court," a sworn statement by the lawyer, Matt Campbell, states. "After I informed Mr. Wine that I would not bring these topics up in court, while still on the phone, Mr. Wine said 'something is going to happen to you and your daughter on Monday.'"

Campbell, who immediately dropped Wine as a client, reported that Wise also texted him a threat to beat him up and "left multiple voicemails that made me feel uncomfortable to the point that I felt it was necessary to get the police involved."