County offices across Arkansas working without computers during possible breach 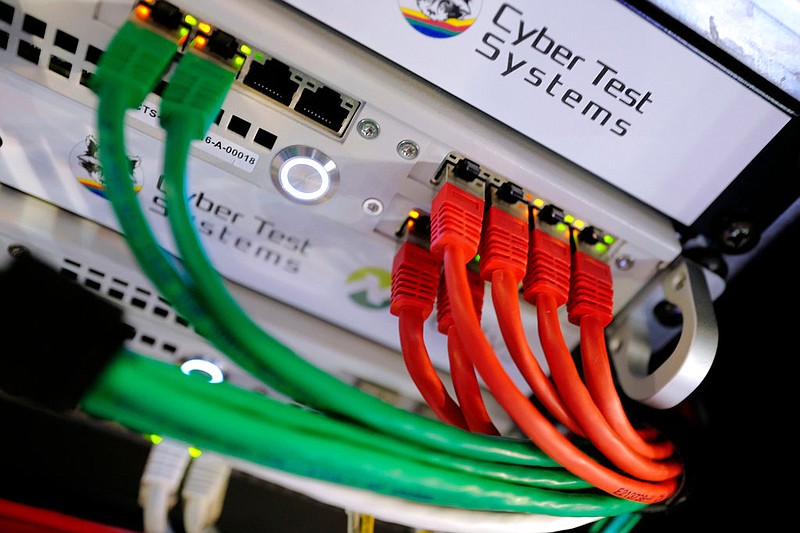 Cables are plugged into servers and computers in this Jan. 23, 2018 file photo. (AP/Michel Spingler)

Across Arkansas, many county government employees were working without computers on Wednesday after a Rogers-based information technology company told them to shut down computer servers because of a possible security breach.

"They're telling us not to even turn them on, period," said Stephen Willis, the Newton County assessor in Jasper. "Nobody can pay taxes through the collector's office. Nobody can assess.

Willis was referring to the county tax assessor and collector's offices. In some of the affected counties, residents were still able to pay taxes and assess property.

Willis said he was notified Saturday to shut down servers, and it could be two weeks before they can use the computers again.

"We're basically just limping through," he said. "All the counties I've talked to, that's what they're doing."

Doug Matayo of Springdale, a consultant for Apprentice Information Systems Inc., said the problem may have affected county offices in half of Arkansas' 75 counties, but some were already "coming back up."

"A lot of this was precautionary," he said. "In an abundance of caution, they saw something weird and took appropriate action."

"When you couple that with our hardware sales and support, you have an unrivaled commitment to your success," according to the company.

Matayo said Apprentice also serves counties in Oklahoma, but none of them had been affected as far as he knew.

Matayo said the possible breach had nothing to do with Tuesday's election.

"All that system, that infrastructure, is on a stand-alone system," he said. "The voting system, tabulators and all that sits off the grid."

When asked if the breach involved ransom, Matayo said "I don't have any information on that."

Chris Villines, executive director of the Association of Arkansas Counties, said he didn't know exactly how many counties were affected.

"I know there has been a breach of AIS systems, and as a precaution they asked local offices to shut down their servers," he said in an email.

In Arkansas, to register a new motor vehicle, a citizen may need a receipt proving that the previous year's property taxes were paid and proof of assessment for the current year's taxes.

With computers down, it's difficult for some county assessors to know if someone has paid their taxes for the previous year, Willis said.

"Most people have a receipt where they've paid their taxes, which were due just a month ago, on Oct. 17 this year," he said.

Scott Hardin, a spokesman for the Arkansas Department of Finance and Administration, said they were aware of the situation affecting some counties.

"State Revenue offices are operating normally, providing vehicle registration and our other services at all of our locations across the state," he said in an email.

"We are cooperating with affected counties. Early in the week, as information was gathered and communicated, there were some isolated delays for a small number of customers in a few offices. We are operating smoothly statewide and Arkansans should feel free to come to any of our 134 Revenue Offices to complete motor vehicle and driver-related services. Also, Arkansans can always visit mydmv.arkansas.gov as many motor vehicle services are available online."

Some of Arkansas' larger counties didn't seem to have as much trouble with the shutdown.

Karla Burnett, director of Pulaski County assessor's office, said hers was the only Pulaski County office that uses an Apprentice server. She said they were notified about the problem on Saturday, took the system offline for a forensic audit and had the system back up and running as of Tuesday morning.

Dana Baker, the Pope County assessor in Russellville, said it wasn't as bad as it could have been.

"Fortunately, our offsite backups were not compromised or breached," she said. "They back us up nightly and send that offsite. So our data should be good once we're able to come back up."

Baker said the server shutdown wasn't affecting all county government offices. In Pope County, for instance, she said it affected all county offices except for the circuit clerk's office.

In east Arkansas, Becky Hogan, the Lee County assessor in Marianna, said they learned a lesson from the shutdown.

In the future, she said personal property account information will be stored on a zip drive so it can be easily accessed if this happens again.

"Real estate is a whole nuther animal," she said. "I don't know how we would duplicate that. It's way too large to put on a zip drive."

Randy Crumley, the Searcy County assessor in Marshall, said the shutdown has "kind of put a kink in stuff."

"Nobody can record a deed, so the deeds cannot be worked. So as far as the real estate part, it's just at a standstill.

"For assessments and whatnot, we're taking names and numbers and doing it the old fashioned way until we get everything back up," Crumley said.

"That's all we can do right now. It's just a waiting game for us."

Crumley said he would probably close the assessor's office today and give employees an extra long holiday weekend. They were already scheduled to be off work Friday for Veterans Day.

"We live in a computer world and once these computers crash, we're going to be hurting," he said. "When they're working good, that's great, but right now they're not worth 50 cents."

Information for this article was contributed by Cristina LaRue of the Arkansas Democrat-Gazette.