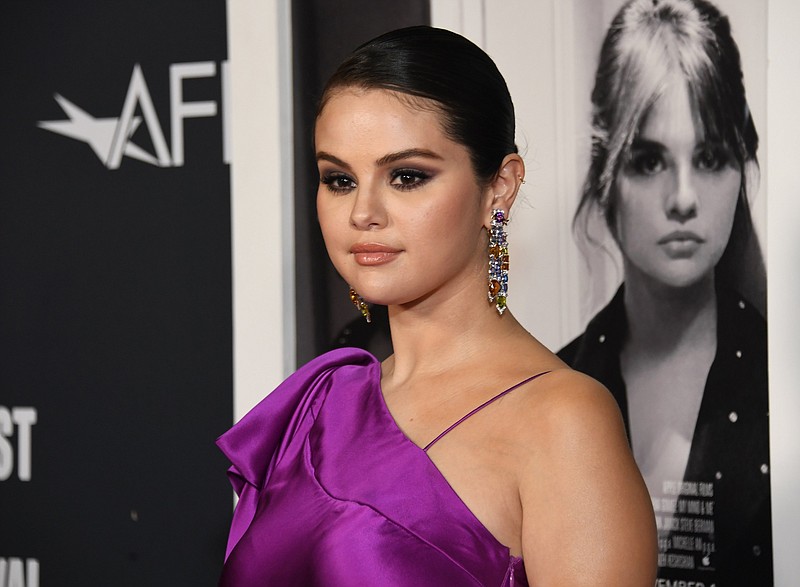 Selena Gomez attends 2022 AFI Fest’s showing of “Selena Gomez: My Mind & Me” at TCL Chinese Theatre on Nov. 2. “I almost wasn’t going to put this out. God’s honest truth, a few weeks ago, I wasn’t sure I could do it,” she told Rolling Stone magazine. (Getty Images/TNS/Jon Kopaloff)

Are we living in a brief Selenassaince? The promotional blitz around Selena Gomez's new Apple TV+ documentary is not only giving fans an autobiographical look at her life, but it also comes with a new single, lyric video, a limited-run SiriusXM satellite radio show and plenty of Gomez factoids to keep her fans satiated.

"This is probably the most you'll hear about me for a while," she told Rolling Stone in an interview published Nov. 3. "I want this to come out, but I also want this behind me. Every now and then, it's important to just disappear."

Just ahead of Friday's release of her documentary "Selena Gomez: My Mind & Me," Gomez walked the AFI Fest red carpet to promote the film and released the eponymous title track featured briefly in the project's latest trailer. The lullaby-like ballad was inspired by her journals over the past few years and offers an inside look at her mental and physical health struggles, including her history of bipolar disorder, psychosis, suicidal thoughts and numerous health problems that have been chronicled in the media.

"'My Mind & Me' is a little sad, but it's also a really nice way of putting a button on the documentary part of life, and then it'll just be fun stories of me living my life and going on dates and having conversations with myself," Gomez told Rolling Stone. "I feel like it's going be an album that's like, 'Oh, she's not in that place anymore; she's actually just living life.'"

The song plays throughout the documentary and is part of a new record she told Vulture she's been working on "for years," and Rolling Stone reported that she has written 24 songs for it. She said she might start recording the album by the end of the year.

"I want to be able to grow through my music," she told Vulture. "I am the person who's terrified of what will happen once it's out, so I want it to be really well done and representative of where I am. There is a bunch of fun stuff that I'm so eager to leak, if I'm being honest. I shall not. But I'm so excited. It'll be fun and refreshing, I think."

As for the doc, the Emmy-nominated "Only Murders in the Building" star told Rolling Stone that she gave "Madonna: Truth or Dare" director Alek Keshishian full access over the six-year shoot and the final product was so raw that she almost didn't release it.

"I almost wasn't going to put this out. God's honest truth, a few weeks ago, I wasn't sure I could do it," she told the magazine.

The film also shows the recording artist checking herself into a treatment facility — one of four that she's been to in her 30-year life.

The former child star and SiriusXM announced the launch of Selena Gomez Radio, a limited-run channel presented and curated by the artist. It's on SiriusXM's Channel 14 and will run through today and on the SiriusXM app through Dec. 2.

In a news release about it, the "Selena + Chef" star shared more about how her documentary came to be. "My Mind & Me" started as an artful concert doc of her ill-fated 2016 Revival Tour — that detoured to a treatment facility — then turned into something else altogether.

"We initially thought that we were gonna do a concert tour video, and during the tour I had to cancel it because I was going through a lot of stuff personally. So we decided to stop. Then I kind of went through a phase where I just needed to be on my own, and then the [2019 philanthropic] Kenya trip kind of came up and we decided we wanted to record that trip," she said. "So it really wasn't gonna be a documentary until the end, when we filmed all the stuff and where I am now and going home and visiting my house and where I came from, I can tell that it was gonna be something bigger than just a puff piece."

Gomez, whose Rare Beauty cosmetics brand donates proceeds to mental health initiatives, also said that she considers her pal Taylor Swift her most influential artist and that she really misses her fans.

"One thing I'd like to say to my fans that I really miss you guys. Before the pandemic, I felt so connected to everyone and you know, since it's been a bit of a journey kind of adjusting to what life is now, I get so excited because it's very sparse," she said. "I don't get to go out a lot. There are new rules and then when I get to meet a fan, it just, it really makes my day and I miss that. Connecting is the whole reason why I do what I do. So I miss touring and doing meet and greets and even just having a little [conversation] with someone just makes my day."

The multi-hyphenate also shared with Rolling Stone that her mental and physical health struggles are still part of her day-to-day. The kidney transplant she had in 2017 won't fix things forever, and her bipolar medication makes it so that she's unlikely to be able to carry her own children: "That's a very big, big, present thing in my life," she said. (But, she added, she's sure that "however I'm meant to have them, I will.")