This image released by Marvel Studios shows Angela Bassett as Ramonda in a scene from "Black Panther: Wakanda Forever." (Marvel Studios via AP)

Made in the wake of tragedy, "Black Panther: Wakanda Forever" reverberates with the agony of loss, piercing the usually less consequential superhero realm. Like someone going through the stages of grief, Ryan Coogler's movie is at turns mournful and rootless, full of rage and blessed with clarity. In the fantastical Marvel Cinematic Universe where mortality is almost always a plaything, wrestling with the genuine article, in the death of T'Challa star Chadwick Boseman, makes for an unusually uncertain, soul-searching kind of blockbuster-scale entertainment.

It's a fine line, of course, between paying tribute and trading on it. I did cringe a little when the Marvel logo unspooled with images of Boseman within the letters: Eulogy as branding. That "Black Panther," a cultural phenomenon and a box-office smash, would get a sequel, at all, was momentarily in doubt after Boseman's unexpected death from colon cancer in 2020. Radically reworked by Coogler and co-writer Joe Robert Cole, "Wakanda Forever" pushed ahead in hopes of honoring Boseman and the rich Afrocentric world of the landmark original. In its admirably muddled way, it succeeds in both.

Part of the profound appeal of Coogler's first "Black Panther" resided in its deft channeling of the real world into mythology. It fed centuries of colonialism and exploitation into a big-screen spectacle of identity and resistance. In an invented African nation, Coogler conjured both a fanciful could-have-been history and emotional right-now reality.

"Wakanda Forever," which opened in theaters Thursday, expands on that, weaving in a Latin American perspective with a similar degree of cultural specificity in the introduction of the Aztec-inspired antagonist Namor (Tenoch Huerta), king of the ancient underwater world of Talokan. At the same time, Boseman's death is poignantly filtered into the story from the start, beginning with off-screen death throes.

"Time is running out," we hear whispered while the screen is still black. Shuri (Letitia Wright), T'Challa's tech-wiz sister, is frantically trying to craft something in her AI lab to save her brother. But in a moment, their mother, Queen Ramonda (Angela Bassett), informs her: "Your brother is with the ancestors." He's laid to rest in a glorious, celebratory procession, carried through a multi-tiered channel of white-clad, singing-and-dancing Wakandans. It's as stunning as anything Coogler has shot.

After this prologue, "Wakanda Forever" shifts to a year later. "Black Panther" took some of the spy-thriller shape of a Bond movie, and the sequel carries that on in a new geopolitical context. At the United Nations, the United States and France are pressuring for access to vibranium, the rare metal that Wakanda has built its empire on. Soon after, a U.S. military expedition discovers vibranium at the bottom of the ocean. But just as they're celebrating, a mysterious tribe of blue underwater people, led by Namor, a pointy-eared monarch in green short-shorts with wings on his ankles, ruthlessly wipe out the entire expedition.

You can feel "Wakanda Forever" searching for a way forward in these early scenes. After such an anguished beginning, how much care can we summon for the whereabouts of magical ores? And more blue people? "Avatar," you might think, has already laid claim to them. What steadies the film is Bassett. Her awesome presence leads "Wakanda Forever" through grief with a staunch defense of Wakanda that rebalances the newly king-less kingdom. She carries on.

What follows is a globe-trotting plot that draws the film away from perhaps its greatest asset in Wakanda but uncovers new places of latent power among historically exploited people. Shuri and Okoye (Danai Gurira), the Dora Milaje general, travel to Cambridge, Mass., to seek the student (Dominique Thorne) who created a vibranium detector. In the Washington area, Wakanda's friendly CIA officer (Martin Freeman) experiences new scrutiny from his boss, played by an unannounced comic actress familiar to Beltway politics.

But, mostly, a series of exchanges draw Wakanda and Talokan closer. Are they friends and foes? They are, at least, a captivating tweak to the mythology of Atlantis. Talokan, dark and watery, is no Wakanda, though, and there's less hint this time of a larger society. Still, Huerta brings a magnetism to Namor. In many ways, he's a corollary to Michael B. Jordan's Killmonger, a non-villain whose fury is in many ways justified. His anger appeals to the still-grieving Shuri who finds herself ready, after T'Challa's death, to "burn the world."

As in the first "Black Panther," the question again hangs in the balance of whether, in a pain-ridden and prejudiced world, rage is the answer. This time, it applies to another powerful civilization, too. "Wakanda Forever," where the role of Black Panther is passed down, is in more ways than one about the transfer of power.

Wakanda and Talokan are brought together a little haphazardly in conflict, as Namor pressures the African nation to join his brewing surface war. "Wakanda Forever" proceeds as a murky, middle-act film that may ultimately serve as a bridge to future "Black Panther" chapters. But along the way, there are countless marvels that Coogler conjures with returning magic-workers like production designer Hannah Beachler and costume designer Ruth E. Carter. How the Talokan are flung into the air by whales. The fierce friendliness of Gurira's performance. Lupita Nyong'o is unfortunately less central here, but every time her Nakia (who has been laying low in Haiti) is present, she graces the film.

"Wakanda Forever" is overlong, a little unwieldy and somewhat mystifyingly steers toward a climax on a barge in the middle of the Atlantic. But Coogler's fluid command of mixing intimacy with spectacle remains gripping. He extends the rich detail and non-binary complexity that distinguished "Black Panther" in sometimes awkward but often thrilling ways. "Wakanda Forever," grappling in the aftermath of loss, ultimately seeks something rare in the battle-ready superhero landscape: Peace. 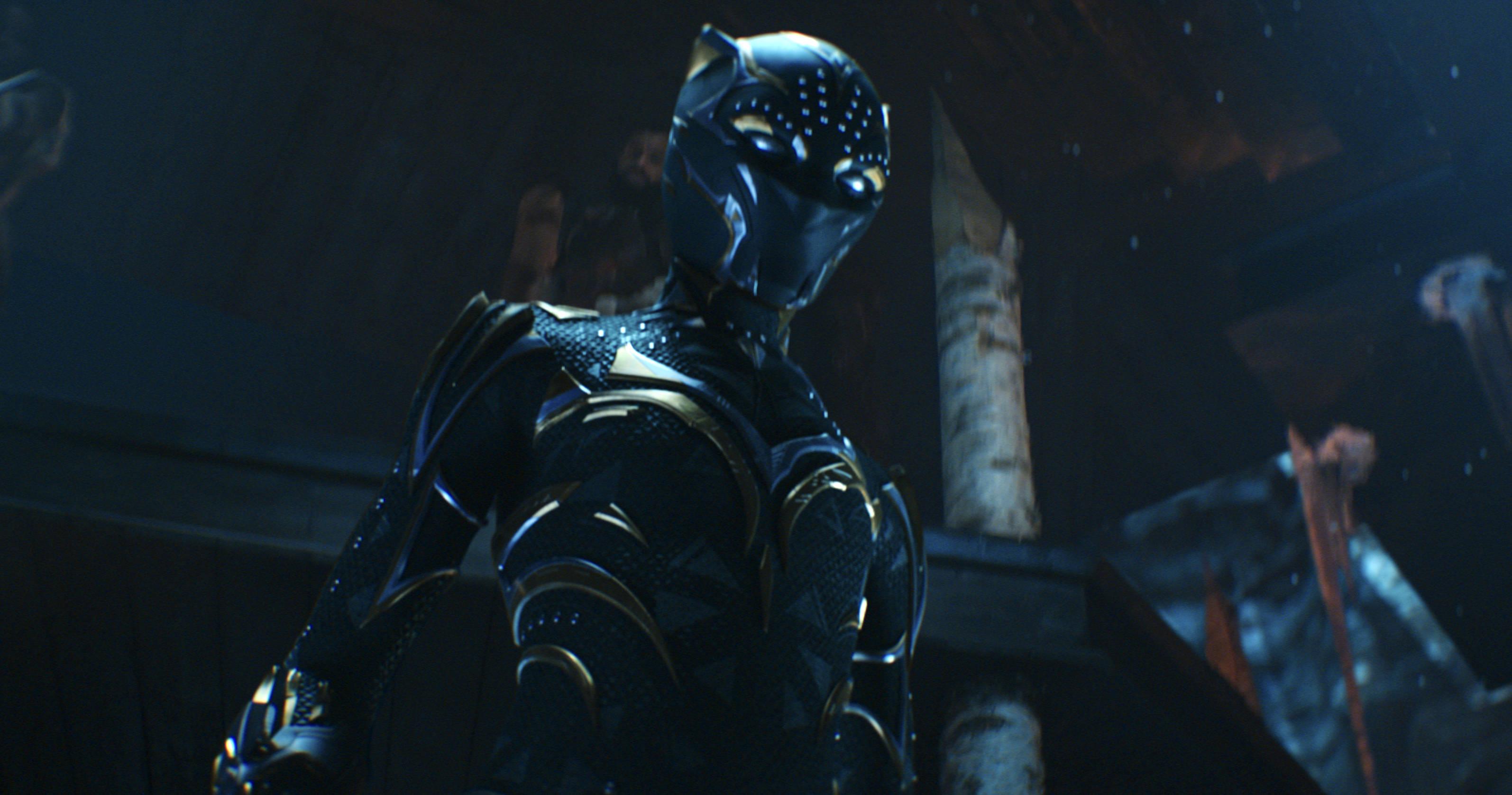 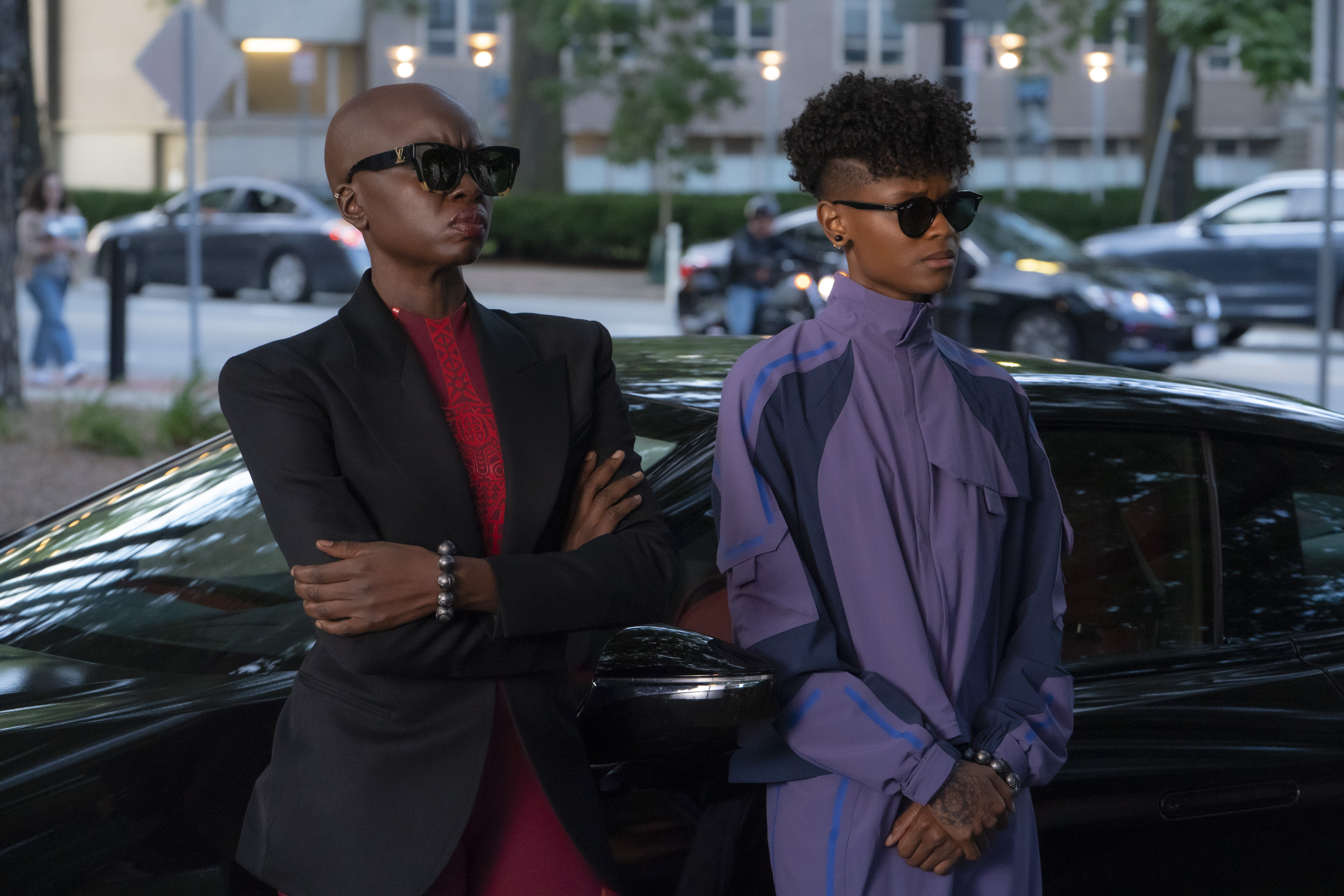 This image released by Marvel Studios shows, from left, Dorothy Steel as Merchant Tribe Elder, Florence Kasumba as Ayo, Angela Bassett as Ramonda, and Danai Gurira as Okoye in a scene from "Black Panther: Wakanda Forever." (Marvel Studios via AP) 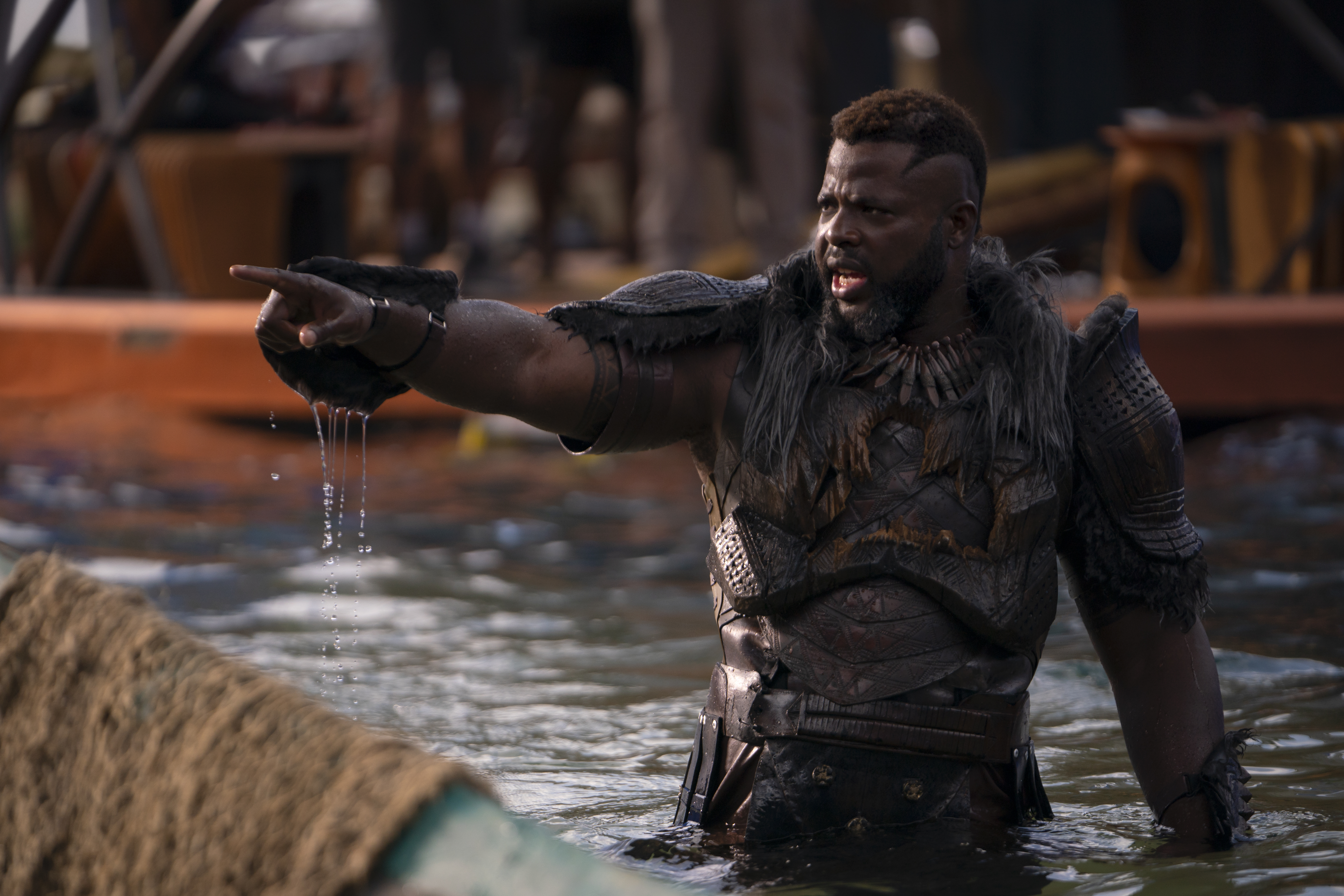