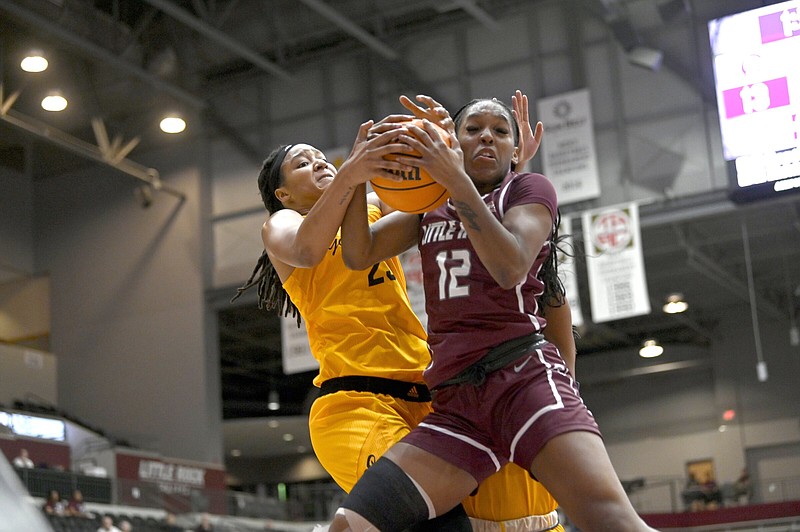 UAPB’s Maori Davenport (left) and UALR’s Tia Harvey fight for a rebound during the first half Thursday at the Jack Stephens Center in Little Rock. The Trojans won 60-56. More photos at arkansasonline.com/1111wbkb/ (Arkansas Democrat-Gazette/Stephen Swofford)

The nerves showed on University of Arkansas-Little Rock guard Faith Lee's face as she stepped behind the lectern Thursday night.

And yet, just minutes earlier on the Jack Stephens Center floor, the freshman had shown no fear.

Lee delivered in her first game as a Trojan, scoring 14 points in 39 minutes -- including eight on four fourth-quarter field goals -- as UALR edged the University of Arkansas-Pine Bluff 60-56.

With the game tied at 43-43 after three quarters, the Trojans (1-0) scored the first six points of the fourth and led the rest of the way, with Lee putting the finishing touches on a season-opening victory for the Trojans.

"It gave me confidence to shoot the ball," Lee said, knowing her teammates and coaches wanted the ball in her hands. "They say it's OK when I miss, just keep shooting it, so I try not to get down on myself."

Earlier in the week, UALR Coach Joe Foley had mentioned the need to discover players he could trust, particularly on the offensive side. Of the 10 players on the Trojans' roster a season ago, the only one available against the Golden Lions was Tia Harvey, who finished with 12 points.

But if it was Lee putting her best foot forward in the late stages, Arkansas Tech transfer Nikki Metcalfe took up that mantle early. The 6-2 forward poured in 10 of her game-high 16 points prior to halftime, knocking down several free-throw line jumpers and neutralizing UAPB's size.

"We've got to have somebody shooting the ball," Foley said. "Faith's going to be a very good player, there's no doubt. ... Nikki did a great job of hitting shots for us against [the Golden Lions' 2-3 zone], so those two, for the first game, did a great job."

UALR (1-0) couldn't make much headway in the first half despite opportunities to stretch their advantage to double digits. A reason for that was going just 12 of 20 at the free-throw line on 17 UAPB fouls.

It didn't get much better after halftime, either -- the Trojans finished 16 of 32.

But on top of the fouls, the Golden Lions (0-2) had their own issues. Six different players turned the ball over multiple times and their 21 turnovers led to 18 points for the Trojans.

"At least 10 of them were unforced turnovers -- we're driving to the basket and they're in there taking a charge," Golden Lions Coach Dawn Thornton said. "[That's] no disrespect to Coach Foley ... they are a well-disciplined team, but we've got to make smart decisions also when we try to push tempo."

That alone didn't have Thornton disappointed. Although UAPB lost twice in a span of four days to open its season, the Golden Lions are very much in the process of coming together -- their two leading scorers Thursday night were Memphis transfer Coriah Beck (12 points) and Troy transfer Jelissa Reese (10).

"We've just played two legendary coaches [Foley and Arkansas' Mike Neighbors] that have been in this business for a very, very long time," Thornton said. "The way that this team has been playing, I'm excited for them."

The Trojans were perhaps not as pleased with the performance, knowing that a similar showing won't cut it Sunday against an Ole Miss team that won 23 games and reached the NCAA Tournament a year ago.

The result is a solid starting point.

"In practice, it really hasn't been going ideally," Lee said. "We needed this to boost our confidence and show everybody that even though this is a new team, we're still going to step up and do our job." 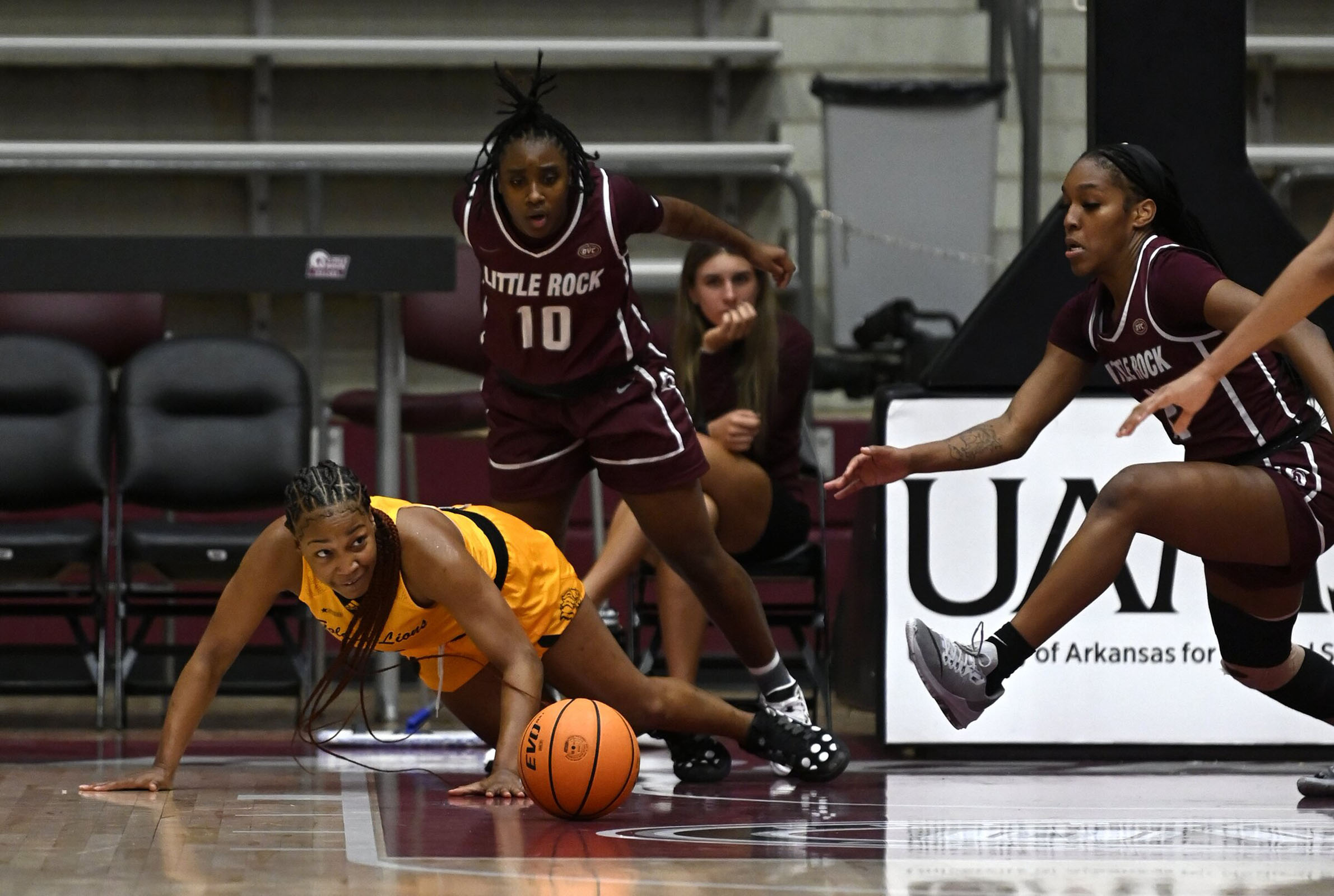 UALR guards Jaiyah Smith (10) and Tia Harvey run after a loose ball Thursday before UAPB guard Raziya Porter (left) can get to it during the first half of the Trojans’ 60-56 victory over the Golden Lions at the Jack Stephens Center in Little Rock. More photos at arkansasonline.com/1111wbkb/. (Arkansas Democrat-Gazette/Stephen Swofford)