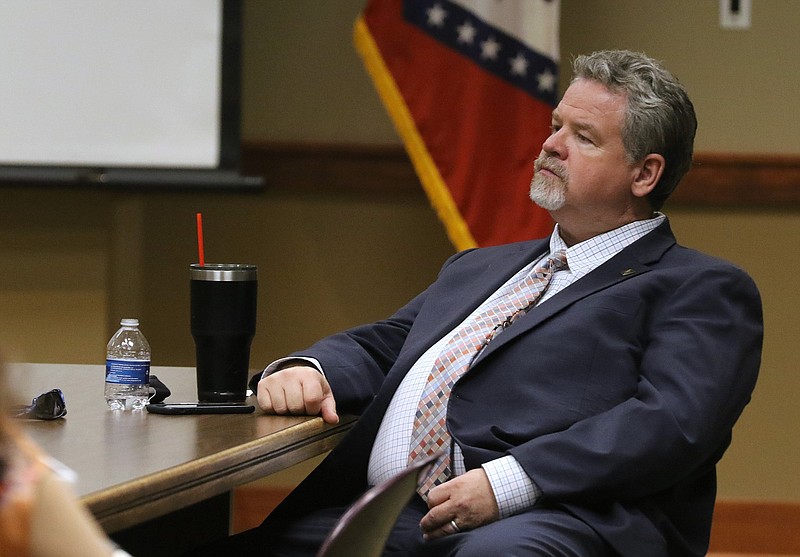 State Sen. Alan Clark, R-Lonsdale, listens to a presentation during a meeting of the Education Caucus of the Arkansas General Assembly at the Association of Arkansas Counties building in Little Rock in this Aug. 10, 2020 file photo. (Arkansas Democrat-Gazette/Thomas Metthe)

The Arkansas Senate on Thursday voted to strip Sen. Alan Clark, R-Lonsdale, of his seniority and elect Sen. Bart Hester, R-Cave Springs, as its leader for the 94th General Assembly from 2023-2025.

In a voice vote with several senators dissenting, the Senate voted for Clark to lose his seniority for the 94th General Assembly, starting Jan. 9, so he remains at position 35.

In late September, the Senate voted 26-4 to find that Clark violated the Senate's ethic rules by filing spurious, frivolous and retaliatory charges of ethics violations against Sen. Stephanie Flowers, D-Pine Bluff, and to suspend Clark and strip him of his seniority until the start of the regular session Jan. 9, and recommend the Senate strip him of his seniority for the following two years.

Clark told senators Thursday that his ethics complaint against Flowers was not frivolous, and state lawmakers shouldn't be paid per diem as expense reimbursement on weekends during legislative sessions.

He said he's disappointed in the state Senate.

"I used to care what you thought," Clark told senators. "I would have thought that you would have known me better, and some of you did and didn't have courage to stand."

In July, the Senate voted to find that Sen. Mark Johnson, R-Ferndale, and Clark violated the Senate's ethics rules and sanctioned them. The actions came after Clark asked Johnson to sign him in for reimbursement of public funds for attending a June 3 Boys State meeting that Clark didn't attend.

The Senate stripped Clark of his committee chairman and vice chairman posts and blocked his eligibility for per diem and mileage reimbursement for the rest of this year, reprimanded him, and stipulated that any future Senate president pro tempores are not to consider Clark for appointment to serve on the Boys State, Girls State or Senate Ethics Committee. He formerly chaired the Senate Judiciary Committee.

Clark has served in the state Senate since 2013.

As the Senate president pro tempore, Hester will succeed Sen. Jimmy Hickey, R-Texarkana, starting in the regular session. Hickey has served as the Senate's leader since 2021.

"This is a responsibility I take with a significant amount of diligence," Hester said in brief remarks after the Senate elected him by acclamation as Senate president pro tempore during its organizational session in advance of the regular session starting Jan. 9.

Hester thanked Hickey for his assistance in helping Hester prepare to take over as Senate president pro tempore.

"This is a bigger job than I may have even anticipated and I have been here for 10 years, and I can't imagine doing this without Jimmy Hickey," he said. "I think that transition is going to matter to our entire body the way we move forward treating each other."

Hester is a home builder and Realtor who has has served in the Senate since 2013 and has been outspoken at times.

At that time, the Senate included 26 Republicans and nine Democrats. Then, the full Senate selected Hickey, with the apparent backing of a coalition of Senate Republicans and Democrats, over Hester as the president pro tempore-designate in a secret ballot in a decision that surprised Hester.

The Senate will be comprise 29 Republicans and six Democrats in the 94th General Assembly.

The Senate also voted 24-6 on Thursday to approve a rule change to limit the minority party to two of the eight members on standing committees.

Sen. Blake Johnson of Corning, who is the Senate Republican leader, said limiting Democrats to two members on the standing committees would mirror the makeup of the state Senate.

But Sen. Clarke Tucker, D-Little Rock, told his colleagues that "I think this rule lowers this institution and is a poor way to start the 94th General Assembly.

She said in an interview that she wants to track the implementation of the state's Medicaid expansion program and the possible reduction in the state's federal matching rate for the traditional Medicaid program, and it should help to bring her knowledge to the Senate public health committee with a new administration taking over the executive branch.

English said in an interview that she has been interested in education and workforce development as long as she's been in the Legislature and "that is the new governor's agenda as well, so we'll be looking at making sure that we are aligning our education system with the jobs for the future and those things that are in demand, kindergarten through career.

She said she has not heard much discussion among lawmakers about expanding school choice yet.

"I am all for tax cuts and I want to do it, but we have got to be very thoughtful and very diligent in what we do," he said in an interview. "So we just can't let anything and everything through there ... with all of this federal money that is being churned in the economy until we know exactly that we are going to be able to afford stuff year over year."

Senators on the Legislative Council reelected Sen. Terry Rice, R-Waldron, as co-chairman of the council.

Sen. Johnson of Corning opted to chair the Senate State Agencies and Governmental Affairs Committee, which will decide what, if any, constitutional amendments to refer to voters in the 2024 general election.

The chairmen of other Senate committees include: