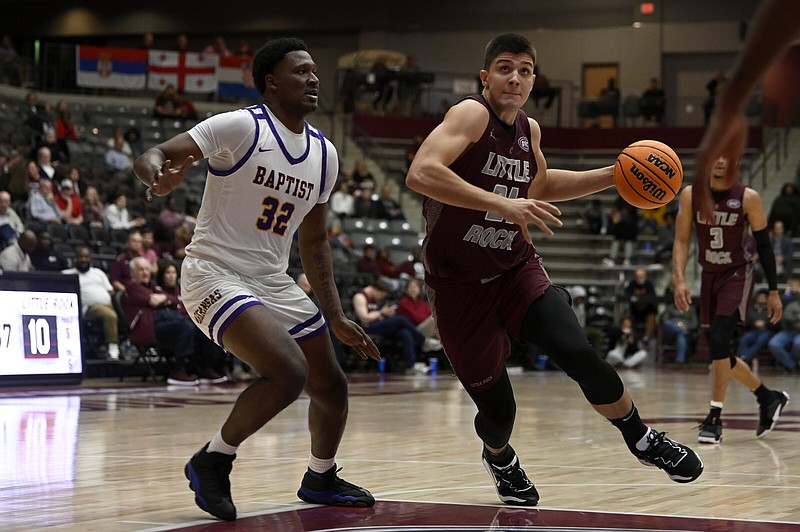 UALR forward Ante Beljan (right) drives to the basket Thursday while being defended by Joshua Perkins of Arkansas Baptist during the Trojans’ 71-60 victory at the Jack Stephens Center in Little Rock. More photos at arkansasonline.com/1111ualr/. (Arkansas Democrat-Gazette/Stephen Swofford)

Coach Darrell Walker had some choice words as he trudged diagonally across the court toward the University of Arkansas-Little Rock locker room at halftime.

The Trojans led by just four points against NAIA member Arkansas Baptist after the Buffaloes' Kendric Robinson drained a running 30-foot three-pointer at the horn to make it 31-27.

Those words likely continued into the second half Thursday night -- until the Trojans finally pulled away.

UALR needed a 22-6 outburst over seven-plus minutes to bury the Buffaloes, winning 71-60 in its 2022-23 home opener at the Jack Stephens Center. Four different Trojans reached double figures -- led by 16 points from Nigel John -- but it was UALR's 52-39 edge on the glass, including 17 offensive rebounds, that had Walker most pleased on a night when his team struggled to separate for more than 30 minutes.

"We had seven turnovers at [Southern Illinois], but we also got outrebounded 48-25," Walker said, reflecting on his team's 94-63 blowout loss Monday. "We talked about nothing but rebounding the basketball on both sides of the court. ... We haven't done it in a long time [and] we've still got a long way to go."

The biggest contributor to the Trojans' rebounding effort was Myron Gardner, who grabbed 13 and added 11 points.

"We want to play through Nigel," Walker said. "He's only played three years of basketball -- he was homeschooled -- so he's behind. ... But he's going to be a force for us. He's going to be a really good player."

Robinson matched John with a game-high 16 points for Arkansas Baptist (2-4). The Buffaloes never led, but it wasn't until the 5:23 mark of the second half that they trailed by 10 or more points.

As much as Walker credited Arkansas Baptist for sticking with his Trojans, he acknowledged his relatively inexperienced team has a long way to go.

"We're capable of anybody getting 15 or 16 [points] -- that's the beauty of this team," he said. "But we're still trying to figure ourselves out, man.

"We're young, and hopefully come [Ohio Valley Conference] time, we'll be a lot better because the schedule ain't getting any easier."