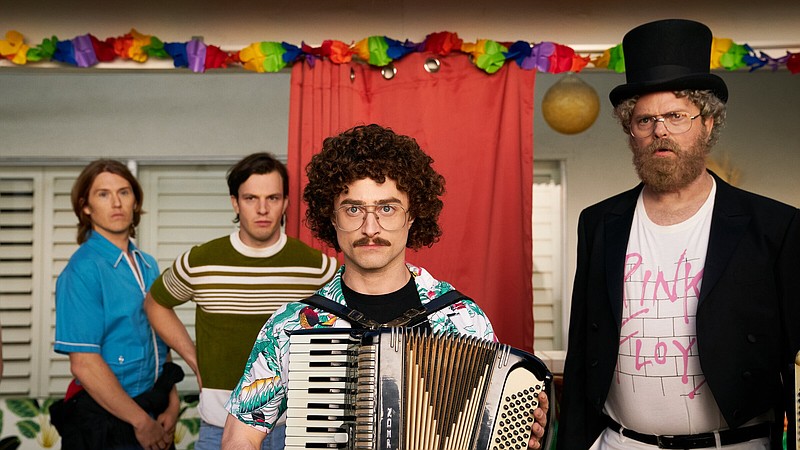 Pay no attention to the ordinary guys at left, what matters is that Weird Al Yankovic (Daniel Radcliffe) has finally met his mentor Dr. Demento (Rainn Wilson) in this scene from “Weird: The Al Yankovic Story,” a most reliable biopic directed by Eric Appel.

Easily one of the more unique success stories in music entertainment is that of Alfred Matthew Yankovic. Born Oct. 23, 1959, this polka-loving accordion-playing kid from Downey, Calif., would become a five-time Grammy winner with six platinum and four gold records to his credit. Over his extraordinary career, "Weird Al" (as he would become affectionately known) has parodied songs from the likes of Michael Jackson, Nirvana, Madonna, Joan Jett, Coolio, and Lady Gaga while also finding success as a record producer, actor and children's author.

So naturally a star like Weird Al needs his own music bio-pic, right? Well he gets one ... sort of ... with "Weird: The Al Yankovic Story." But rather than tell his true-life story, "Weird" is a full-on unabashed parody of today's wildly popular Hollywood bio-pic formula. This wacky and at times utterly hysterical creation leans heavily into the music/celebrity bio-pic tropes. There's the ambitious dreamer, the meteoric rise to stardom, the seduction of fame, the crushing fall, and the inevitable ascension from the ashes. But you've never seen it exaggerated quite like this.

But here's the thing, most of what we get in "Weird" is absolutely malarkey -- outlandish fiction conceived from the minds of co-writers Eric Appel and Weird Al himself. And while it may not make for the most accurate account, this outright ridiculous spoof is loaded with laughs, especially the first half, which is some of the funniest material I've seen all year. There are tidbits of truth scattered throughout (Al was introduced to the accordion by a door-to-door salesman; his mother did forbid him from listening to Dr. Demento; Coolio wasn't too happy with Al's "Gangsta's Paradise" parody, etc.). But don't take too much of what you see seriously.

None other than Daniel Radcliffe is tasked with filling the Weird one's shoes, and he turns out to be a great fit. His big glasses, curly mop, two-piece mustache, and loud Hawaiian shirts certainly nail the appearance. But it's Radcliffe's unshakable earnestness that's the icing on the cake. Regardless of how ludicrous things get, he always sells us on his character's sincerity. It's quite the performance -- odd, funny, strangely empathetic, and 100% committed.

But before the baton is handed to Radcliffe, Appel (who also directs the film) carries us back in time to highlight some key not-so-real moments from Al's youth. We see his struggles with his uptight mother, Mary (Julianne Nicholson) and his temperamental (and borderline deranged) father, Nick (Toby Huss). Al's mother doesn't condone what he listens to, especially the Dr. Demento radio show, his favorite. Meanwhile his father sees all of his interests as a complete waste of time. Instead, Nick believes his son should be working at the town's hilariously indistinct factory (there is a joke there) with all the other "real" men.

That doesn't make for an easy road to stardom, but Al's desire to make music is insatiable. He becomes a closet accordion player, hiding his real self from his disapproving father. But when things get a little too wild at a teen polka party (as they often do at teen polka parties), Al's love for the accordion is exposed. It causes a rift between him and his family leading to Al leaving home as soon as he's able.

But in one magical (and utterly absurd) moment of inspiration, Al Yankovic's dream is set on a path to reality. While hanging out and making sandwiches for his three roommates, he hears the 1979 pop hit "My Sharona" from The Knack. Suddenly Al grabs his accordion and plays as the words "Oh, my little hungry one, hungry one. Open up a package of My Bologna" streams through his lips. "Dude I've got chills," expresses one of his awestruck pals. And a star is born.

Soon Al is playing his first gig at a rough-and-tumble biker bar where none other than Dr. Demento (Rainn Wilson) hears his act. Smitten, Demento takes Al on as his protege, introducing him to a wild assortment of other eccentric entertainers and (more importantly) playing his music on his radio show.

The entire first half is filled with one funny bit after another. It's a farcical assembly line of hilarious conversations and outrageous dialogue, and all spoken with straight-faced conviction. It features a cavalcade of funny cameos including Jack Black, Conan O'Brien, Lin-Manuel Miranda, Patton Oswalt, David Dastmalchian, Quinta Brunson, Will Forte and even Weird Al himself. The zany first half culminates in a whirlwind romance with a gum-smacking Madonna (a scene-stealing Evan Rachel Wood who looks as if she stepped right off the "Desperately Seeking Susan" set).

The second half isn't quite as snappy, and its better gags are a bit more sporadic. But it still has its moments, especially as the movie takes the silliness completely over the top. Appel's insistence on never taking anything seriously (even when it looks like he's taking something seriously) keeps things light. Yet the movie has an unexpected amount of heart underneath its goofy veneer in large part thanks to Radcliffe. He gives us just enough of a real character to care, which turns out to be all we need. That's because most of our time will be spent laughing at just how bonkers Weird Al's not-so-true story gets.

Streaming on the Roku Channel