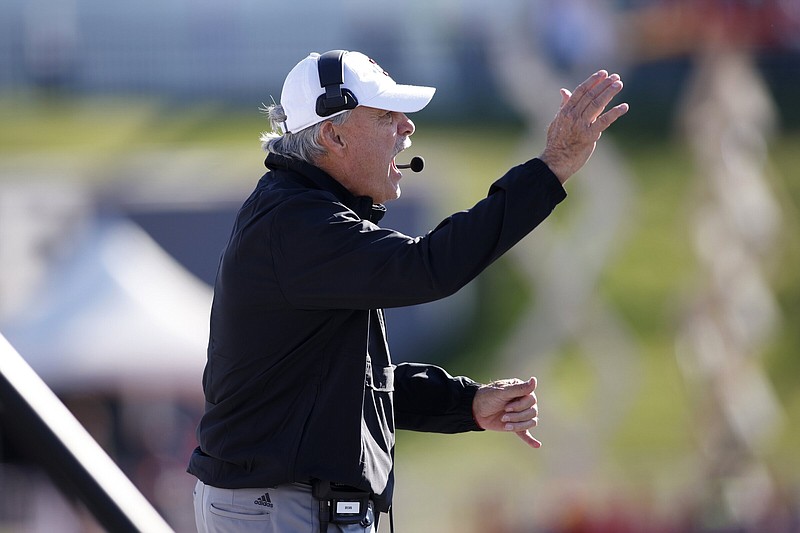 Coach Don Brown will lead Massachusetts against Arkansas State today at Centennial Bank Stadium in Jonesboro. Brown was a finalist for the Broyles Award, given to the nation’s top assistant coach, in 2016 while at Michigan. (AP/Al Goldis)

Coaches that have been in the game as long as Butch Jones are bound to have crossed paths with their counterparts at one point or another.

The same could be said for Massachusetts Coach Don Brown. The 67-year-old began as a college assistant in 1982 at Dartmouth and tackled his first head coaching gig in 1993 at Division III Plymouth State.

And who did Brown face in his inaugural game? Wilkes, featuring first-year offensive coordinator Butch Jones.

"We kind of go back a long time," Jones quipped during his Tuesday news conference.

The pair collided again nearly three decades later in the 2020 Citrus Bowl -- Brown as Michigan's defensive coordinator and Jones as an offensive analyst at Alabama.

But when Jones and Brown meet this afternoon in Jonesboro, it won't be as assistants for perennial powerhouses nor as up-and-comers in the coaching business. Both are at the helm of scuffling programs, and although Jones has faced his share of difficulties in his first two seasons at Arkansas State, those issues pale in comparison to the mountain that Brown is attempting to climb at Massachusetts.

The Minutemen, who have been a Football Bowl Subdivision independent since departing the Mid-American Conference in 2016, are a combined 3-34 in their last three-plus seasons and have not won more than four games in a season at any point in the past decade.

If that alone doesn't paint a stark enough image of Massachusetts' woes, perhaps this year's statistics do.

Not only are the Minutemen (1-8) last nationally in points per game at 11.9 and second-to-last in total offense at 256.8, but seven of their eight losses have come by double digits -- most recently, a 27-10 defeat to a Connecticut program that has not played in a bowl game since 2015.

Yet, the 2-7 Red Wolves are in no position to take even one-win Massachusetts lightly.

ASU is preparing for the Minutemen's multi-quarterback system, although sophomore Brady Olson has been the only player to attempt a pass in Massachusetts' last two games.

Brown's team has used both Gino Campiotti and Garrett Dzuro as dual-threat options at times, which could be a way to attack a Red Wolf rushing defense that was gashed by South Alabama.

But given the Minutemen's meager offense this season, Massachusetts' more likely route to threatening ASU will come from the other side of the ball.

While most Minutemen statistics rank near the bottom of FBS, Massachusetts' defense is 66th in yards per game at 374.0 and Jones alluded to a "pressure-activated defense" that will get opportunities to attack a beleaguered Red Wolf offensive front.

"2-7, it's not what everybody expected but shoot, we've got to finish," defensive lineman Ethan Hassler said. "The finish is the most important thing because you're going to have momentum."