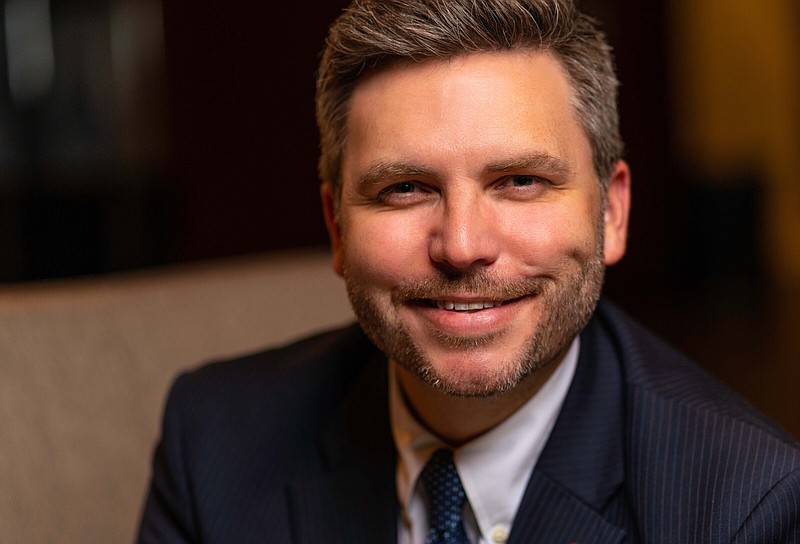 Brent Leatherwood, the new president of the Ethics and Religious Liberty Commission of the Southern Baptist Convention, once served as executive director of the Tennessee Republican Party. In his new role, his focus is on policy rather than partisan electioneering, he said. (Courtesy photo)

Brent Leatherwood, the new president of the Ethics and Religious Liberty Commission of the Southern Baptist Convention, has been in the partisan trenches.

He managed a Republican congressional campaign a dozen years ago and worked on Capitol Hill as a senior legislative aide to former Rep. Connie Mack, a Republican from Florida. As executive director of the Tennessee Republican Party, he helped the party further cement its role as the dominant force in Volunteer State politics.

These days, he concentrates on issues rather than down-ballot races.

Leatherwood and the organization he leads don't endorse candidates or try to tip the scales on Election Day, he told the Arkansas Democrat-Gazette last month.

"While we talk about public policy and we certainly develop relationships with policy makers, this entity does not get involved on the electoral side, on the campaigning side. We don't do things such as voter surveys or campaign scorecards," he said. "We are mainly interested in engaging on the policy side and working with whomever is in elected office to try and do things such as defend religious liberty or advance the protection and sanctity of human life or just, overall, stand up for human dignity. That's where our focus is."

While he isn't embracing individual candidates, he encouraged Arkansans to vote for Issue 3, the Arkansas Religious Freedom Amendment, writing a guest editorial to that effect along with J.D. "Sonny'' Tucker, executive director of the Arkansas Baptist State Convention.

Asked whether religious persecution is a problem in the Natural State that makes a state constitutional amendment necessary, Leatherwood said, "For your average Baptist in Arkansas, religious persecution is not some immediate threat. That said, in taking the step to enshrine this in the state constitution, it's certainly something that will provide certainty for generations to come. And I believe that is a good thing."

Although Baptists are the dominant Protestant denomination in the United States, they haven't always been so popular. Early on, their rejection of infant baptism and established state churches made them pariahs.

"Religious liberty is a Baptist distinctive. It is very important to our churches because, for so long, it was Baptists who were on the losing end when religious liberty was not protected," Leatherwood said.

The commission has offices in Nashville, Tenn., and in Washington and works to advance legislation that reflects Baptist priorities.

Baptists will work with members of either party to advance their agenda, he said. They also are there to bear witness, he said.

"Southern Baptists see the public square as a mission field, and they want to have an entity that is charged with going into the public square and speaking to issues, of course, in a manner that is reflective of the ways that our churches believe," he said.

In the capital, they seek to "represent the gospel" and to "go out into the public square and be the salt and light that Christians are called to be," he said.

Leatherwood joined the Ethics and Religious Liberty Commission as its director of strategic partnerships in 2017 and was promoted to chief of staff in 2020. He had served as acting president since September 2021; the post became vacant following the resignation of Russell Moore, a frequent critic of then-President Donald Trump.

Todd Howard, pastor of Watson Chapel Baptist Church in Pine Bluff, and chairman of the presidential search committee, said commission president is a challenging assignment, noting that it requires extensive knowledge, experience and travel, as well.

The search committee unanimously backed Leatherwood, he said. Commission trustees were unanimous as well, he added.

In addition to being smart, Leatherwood has good people skills, Howard said.

"The one knock on him is he's a Tennessee Volunteers fan," Howard added. "Besides that, he is just the most approachable, nicest, warmest guy. He's just ... [got a] great personality. [He's] great to be around."