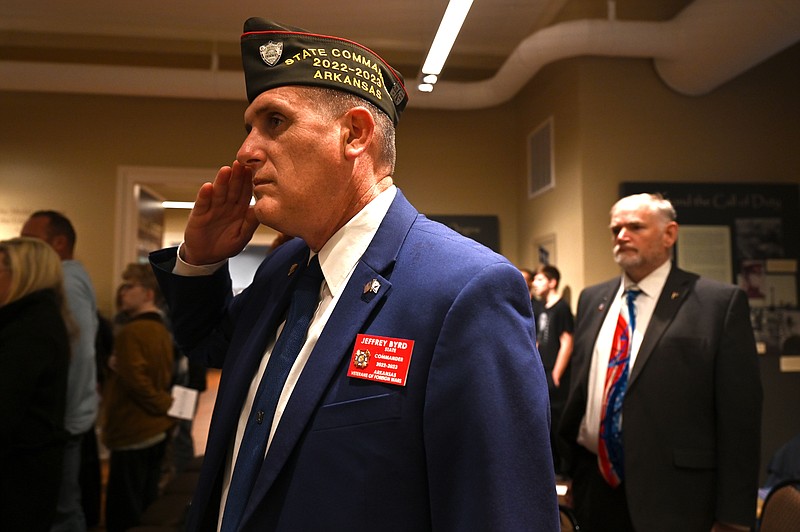 Jeffrey Byrd, commander of the Arkansas Department of the Veterans of Foreign Wars, salutes during a presentation of the colors Friday by the Governor’s Joint Color Guard at the MacArthur Museum of Arkansas Military History in Little Rock. More photos at arkansasonline.com/1112macarthur/. (Arkansas Democrat-Gazette/Stephen Swofford)

As the rain wound down Friday morning, the Veterans Day event at the MacArthur Museum of Arkansas Military History also came to an end.

Forced inside its cramped confines of displays and exhibits, dozens of Arkansas veterans from across decades of service and wars had just heard a keynote speech by Alison Williams, chief of staff to Gov. Asa Hutchinson.

Now, as they milled around the building's second floor, one veteran led another from the main room to a smaller one.

Nate Todd, secretary of Arkansas' Department of Veterans Affairs, guided Col. Sherman Tate, an elderly Black veteran of the Vietnam War, past a sign on an easel.

The sign, featuring an image of blank dog tags, read "Veterans History Project" and below in bold, "Tell Your Story."

Tate, who wore glasses and a medical mask, wanted to tell his story. He became the first Arkansas veteran to sign up for the school's oral history project.

The project, led by McCormack, will be worked on over the course of the school year by three 15-year-old sophomores and will be contributed to the Library of Congress' main Veterans History Project.

Started in 2000, VHP collects memories of U.S. military veterans for posterity. Sen. John Boozman, R-Ark., is a champion of the project. The senator's website says there are 200,000 veterans in Arkansas, but only roughly 1,200 people have been chronicled by VHP.

The work by the three Central High students is an offshoot of the project, part of the school's Education Accelerated by Service and Technology (EAST) Initiative program, and was the choice of students Will Shue, Carter Lambert and Bryce Chunn.

"It's a big program across the state," McCormack said. "Students propose projects for their community. And then they are the ones who are responsible for mapping out whatever it is that they need to do to accomplish (what) they have proposed."

On Friday, they were at the museum to schedule future 30-minute interviews with veterans.

What inspired Shue to choose a veteran oral history as his EAST project?

"Being in a war is something most people aren't really going to experience," he said. "So to kind of get in their head space ... what they saw, what they experienced, why they chose to join and fight in the wars. Because we understand the big picture, the wars and the battles, but we don't understand as much what it was like from the individual on the ground perspective."

As the crowd filtered downstairs to leave, McCormack finished explaining the project and its mandate to one veteran.

Byrd, commander of Arkansas' Department of Veterans of Foreign Wars of the United States, made a beeline for the group's small table, bordered by cubicle walls decorated with war photos and manned by Shue. Byrd jotted down his name and email.

Byrd served in the Air Force from 1998 to 2018. He saw three tours during Operation Iraqi Freedom -- which began in 2004, nearly three years before Shue, Lambert and Chunn were born -- and one tour in support of Operation Enduring Freedom.

Byrd, a native of Beebe, explained why he was so eager to sign up to share his story.

"It's important to preserve our history," Byrd said before pausing a few seconds. "The words are escaping me. ... We want (people) to learn, so that if there's mistakes that were made, they're not repeated for our future generations."

Asked if, when the time comes to sit down with the students, he had anything specific he wanted to tell them, Byrd stopped and looked at the ceiling, thinking.

Later, Byrd double-checked with McCormack about who the project was ultimately for. It turned out his testimony would wind up at his father's former place of work, where he was part of historic film restoration.

"My father retired from the Library of Congress, so that's pretty neat," Byrd observed.

Byrd was joined at the ceremony, and in signing up for the oral history project, by his chief of staff, Ashley Little.

Little served in Operation Desert Storm. He doesn't want his fellow veterans of the 1991 conflict in Iraq and Kuwait to become veterans of a "second forgotten war," a reference to how the Korean War of 1950-53, which never officially ended, is perceived in the popular memory.

"There were some significant things there during Desert Storm," Little said. "That was the last great tank battle of the 20th century. Battle of 73 Easting. I was with the 2nd Armored Cavalry Regiment in the battle. ...

"I'd love to get the story on the books."