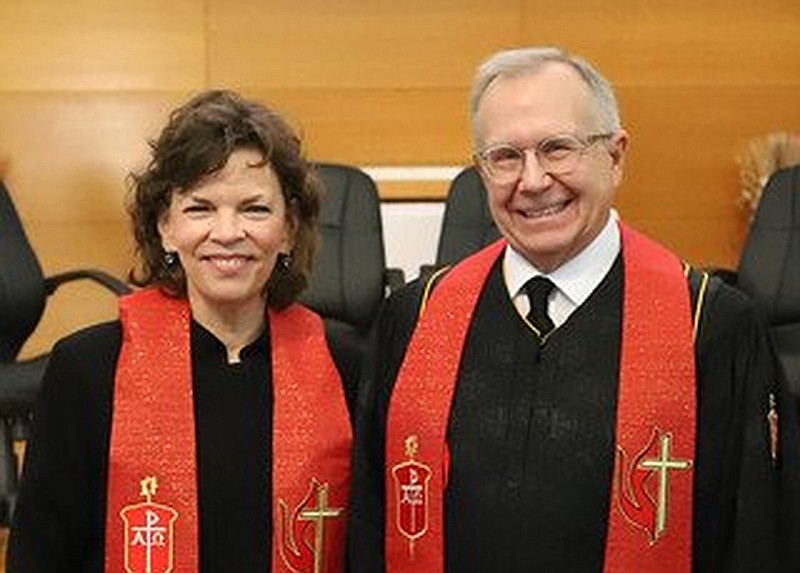 Newly elected United Methodist Bishop Laura Merrill, who will lead the denomination’s Arkansas Conference effective Jan. 1, is pictured with Bishop Gary Mueller, who is retiring Dec. 31 after leading the Arkansas Conference for more than a decade. (Todd Seifert of the Great Plains Conference)

A bilingual, third-generation United Methodist minister with more than a quarter-century of leadership experience has been elected to serve as bishop and will oversee the denomination's Arkansas Conference.

Laura Merrill, 59, currently Central District Superintendent for the Rio Texas Conference, will replace Bishop Gary Mueller, who is retiring Dec. 31 after more than a decade of service.

Delegates from the South Central Jurisdiction, meeting in Houston on Nov. 2, selected Merrill and two other new bishops on the first ballot.

Delores "Dee" Williamston, director of clergy excellence and assistant to the bishop in the denomination's Great Plains Conference and a veteran of the Kansas Army National Guard, was the first Black woman to be elected bishop in the South Central Jurisdiction. She will serve in Louisiana.

The third, David Wilson, assistant to the bishop in the Oklahoma Indian Missionary Conference, also was elected and is the first American Indian to be elected bishop. Wilson is a member of the Choctaw Nation.

The jurisdiction also voted, 128 to 35, to approve a resolution titled "Queer Delegates' Call to Center Justice and Empowerment for LGBTQIA+ People in the UMC." It opposes the denomination's longstanding teachings concerning human sexuality, as contained in the Book of Discipline, maintaining that punitive action should not be taken against bishops or other clergy who disobey provisions concerning same-sex marriage or the ordination of self-avowed practicing homosexuals.

It also calls on the gay delegates' "straight and cisgender allies" to use their "voice and vote to support, empower, and amplify the voices of the LGBTQIA+ community in the United Methodist Church."

The United Methodist Church, the nation's second-largest Protestant denomination, has 6.3 million members in the United States, including 117,440 members in Arkansas.

The Rio Texas Conference, with its headquarters in San Antonio, stretches from Austin south to the Rio Grande and east to the Gulf of Mexico.

Merrill grew up in Austin; her father, J. Charles Merrill, was longtime pastor at University United Methodist Church, a stone's throw from the UT Tower.

Like her father and her grandfather, Bruno C. Schmidt, she attended Southwestern University in Georgetown, Texas, graduating with a bachelor's degree in International Studies.

Fluent in Spanish, she served as a missionary in Chile and worked with refugees in and around Tucson, Ariz., then enrolled at Emory University's Candler School of Theology.

In addition to serving as an assistant to the dean and director of communications, she also earned a master's of divinity degree, finishing first in her class.

Mark Norman, senior pastor at Highland Valley United Methodist Church in Little Rock and a former district superintendent, predicted Merrill would be a good fit for the Arkansas Conference.

He was one of the delegates to the 2022 South Central Jurisdictional Conference, which included Methodists from Arkansas, Texas, Oklahoma, Kansas, Louisiana, Missouri, Nebraska and New Mexico.

"I can tell that she's about the most qualified bishop that Arkansas has had," he said.

Given her wealth of experience, "She's just going to be able to build some bridges," he said.

More recently, she served as district superintendent of the El Valle District, assisting congregations in the border region. She was also assistant to the bishop and director of clergy excellence in the Rio Texas Conference. She also has been its director of connectional ministries.

Merrill is the second woman to serve as bishop in the Arkansas Conference.

After a half-century of debate on concerns ranging from the primacy of Scripture to same-sex marriage and ordination, traditionalists are debating whether to remain in the denomination or break away.

Mueller, who had worked to ease tensions among Arkansas traditionalists, centrists and progressives, announced his retirement plans in September, telling Arkansas Methodists in a letter that the "divisions in our denomination have taken a personal toll."

The state's second-largest United Methodist congregation, Jonesboro First United Methodist Church, has already voted to disaffiliate from the denomination. The decision must still be ratified by the Arkansas Conference; the matter will be discussed at a Special Session of the Annual Conference on Nov. 19 in Hot Springs.

Dozens of other Arkansas congregations are also weighing whether to depart; a number have already voted to break away.

It's unclear how Merrill will treat those seeking to separate from the denomination or what her priorities will be.

In an email Tuesday, she told the Arkansas Democrat-Gazette she was not prepared to address "issues in Arkansas at this time."

Through an Arkansas Conference spokeswoman Wednesday, Merrill said, "I am already inspired by the faithfulness, the hopefulness, and the spirit of possibility that I have found in the people of Arkansas."

In a letter to Arkansas Methodists on Monday, Mueller predicted Merrill would "provide excellent leadership" as the Conference works "to make disciples of Jesus Christ."

Describing the new bishop as "an excellent listener, thoughtful, compassionate, and fair," Mueller said, "I believe she is an excellent match for Arkansas and will be an outstanding leader."