Foley set for honor on court 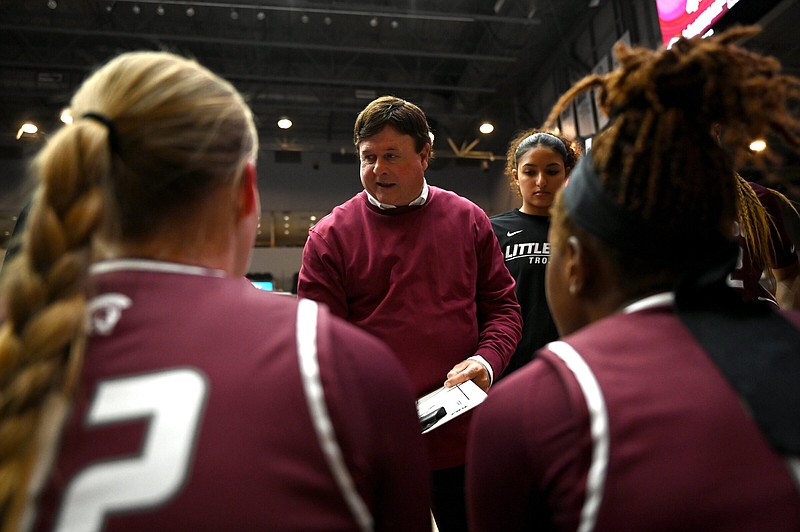 UALR Head Coach Joe Foley talks with the team during a time out in the first half of the UALR vs UAPB women's basketball game at the Jack Stephen Center in Little Rock on Thursday, Nov. 10, 2022. (Arkansas Democrat-Gazette/Stephen Swofford)

Joe Foley is, if nothing else, stoic.

Sure, the 67-year-old doesn't hesitate to pull a player aside in the midst of a game or practice and give her a stern message. But most of the time, Foley sits comfortably in his chair, second in from the scorer's table, just to the left of longtime assistant Alicia Cash.

There's a method to it all. How could there not be for the third-winningest active coach in Division I women's basketball?

"If you've put in the work pregame getting your team prepared, you shouldn't have to do all that yelping and hollering," explained Jocelyn Love Ashton, who both played for and coached with Foley at the University of Arkansas-Little Rock. "Your kids should be able to go out there and show what you have taught them."

The accolades are many for Foley, whose 834 wins across 36 seasons at Arkansas Tech and UALR put him behind only Stanford's Tara VanDerveer and Connecticut's Geno Auriemma.

If his former players know Foley well enough, perhaps he'll shed a tear when his signature is revealed -- especially since it was a cause pushed by nine of the hundreds of women who have played for him over the last 19 years at UALR.

They wanted nothing more than to recognize a man who has transformed both a program and its many players. And they wanted to do it while Foley could still coach on the very court that bears his name.

"It's the biggest way we can say thank you to him," Cash said.

Ashton, a West Memphis native and Class 5A-East Conference Player of the Year in 2003, knew Foley before he made the move from Russellville to Little Rock.

Her Blue Devils had traveled to Arkansas Tech for Foley's team camp and she was well aware of the reputation Foley carried -- a serial winner with NAIA national titles in 1992 and 1993 as well as a Division II runner-up finish in 1999.

In 2002-03, the season before Foley's hiring, UALR had finished 5-23, going winless in conference play. Since the program's reincarnation before the 1999-2000 season -- following an 11-year hiatus -- the Trojans had never won more than eight times in a single season.

"They were terrible," Ashton said. "When they would recruit and come sit on our court, we would be like, 'Oh god, why are they here? They're going to run off all the good schools.'"

Foley changed that instantly. In his first three seasons, UALR won 10, 10 and 13 games. In Year 5 came a Sun Belt Conference West Division title -- with the Trojans winning 20-plus times for a second straight season -- and within a decade, Foley got UALR to the NCAA Tournament for the first time.

That 2010 bid was seminal, and not simply because the Trojans reached the tournament in each of the next two seasons before doing so again in 2015.

Ashton had lived the rise, becoming the program's all-time leading scorer with 1,495 points from 2003-07 before returning as an assistant coach in 2008.

She'd heard Foley tell her the day would come that UALR would be playing in March. She believed it, too.

The reality of it all, however, took some time to sink in.

"As ESPN announced that we had made it in ... I just remember at one point looking at him and then daydreaming about, 'He said he was going to turn the program around and here were are,'" Ashton said.

Asriel Rolfe was a player on those first two NCAA tournament teams, then immediately transitioned to a role on Foley's staff.

Seeing how much time Foley put into film study made Rolfe appreciate how much he'd pushed her in the years prior. Now as a high school coach in north Texas, Rolfe applies everything that she learned from her years at UALR.

A moment from the 2017 Sun Belt Tournament, Rolfe's final season on staff, embodied all that Foley taught.

"We were playing Appalachian State and ... their coach had throughout the year been fighting cancer," Rolfe explained. "Her hair was shaved off because she had been having chemo treatments, and [Foley] had won Coach of the Year that year.

"He got his Coach of the Year [Award], shook the guy's hand and and gave it to the App State coach."

Foley makes a point to be selfless. When the Trojans announced in July that they were naming the court, Foley said he'd have been pretty uncomfortable with the idea had it not come from his players.

Rolfe, Cash and Ashton were among the nine who wrote a letter to UALR Athletic Director George Lee with the request.

"The past two years showed us how unpredictable life is," the letter read in part. "Yet the one person who never faltered was Coach Foley."

Consistency is such a part of Foley's routine that a surprise moment like giving over an award caught even Rolfe off-guard.

"Coach of the Years don't come around very often," Rolfe said. "It spoke a lot of the person he is.

Cash has been at Foley's side since 2008. Not much has changed.

"He's kind of mellowed out a little bit more than when he first came down here," Cash said. "We do the same drills, still run the same offense. It's all about repetition."

As much as Foley avoids emotion, Cash hopes her boss will shed a tear Sunday.

The Trojans are expecting around 60 former players -- both from Arkansas Tech and UALR -- will be at the Stephens Center for the pregame ceremony, set to begin 30 minutes prior to the Trojans' game against Ole Miss.

Putting Foley's name on the hardwood is a relatively small tribute when weighed against all the legendary coach has accomplished in his nearly four decades on the sidelines.

"We're an elite program," Cash said. "We're well-known across the nation to a lot of the Power 5 [teams] that won't play us because we're a good mid-major.

"He's done a tremendous job taking our program from pretty much the bottom. ... With everything he's done, he's earned it." 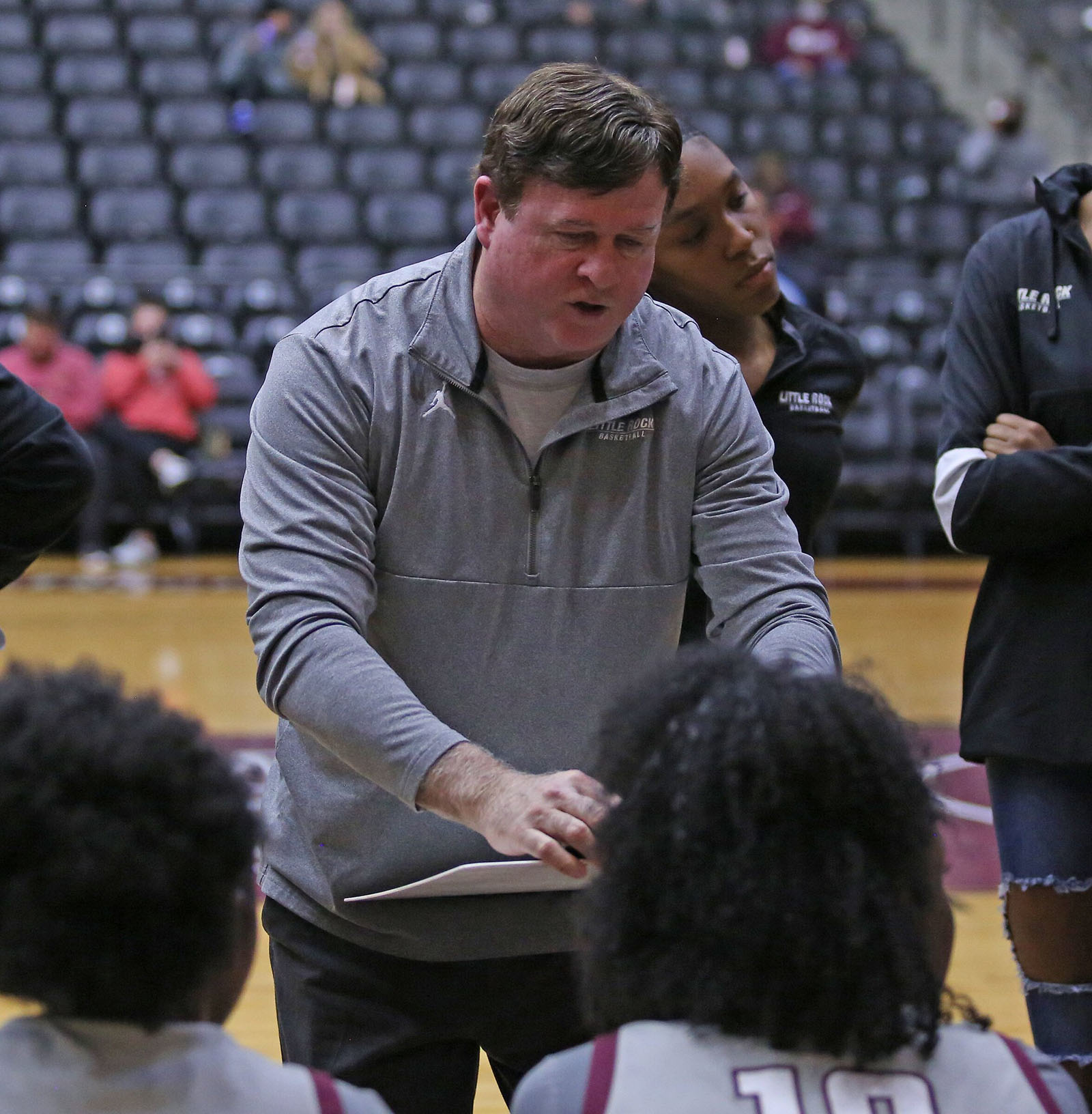 Coach Joe Foley has made UALR “an elite program,” according to longtime assistant Alicia Cash. “We’re well-known across the nation to a lot of the Power 5 [teams] that won’t play us because we’re a good mid-major,” Cash said. (Arkansas Democrat-Gazette/Colin Murphey)