IN THE GARDEN: Wax leaf ligustrum resembles privet, but is not invasive in Arkansas 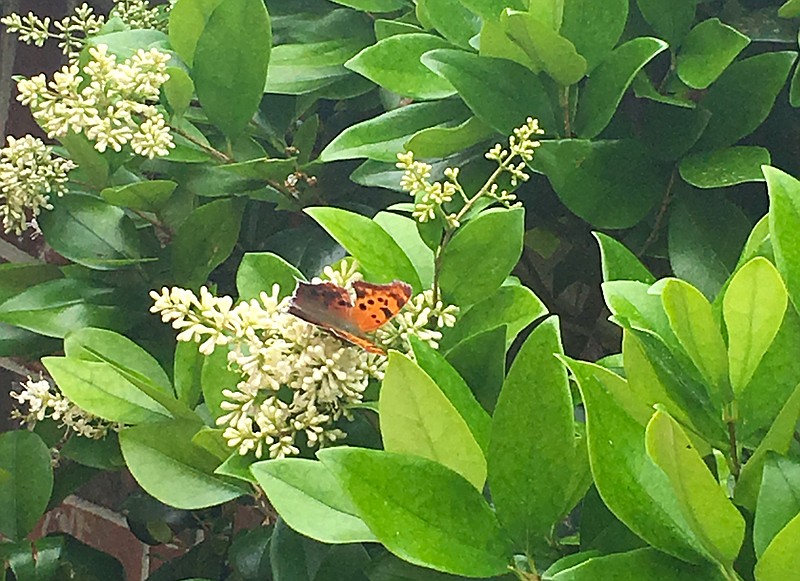 Wax ligustrum resembles Chinese privet hedge but is much better behaved. It has a strong, sweet fragrance. (Special to the Democrat-Gazette/Janet B. Carson)

A: Wax leaf ligustrum is commonly used in Arkansas as an evergreen shrub. It is not the invasive Ligustrum vulgare, commonly called privet. Wax leaf ligustrum has larger, waxier green leaves than privet but does bloom with "fragrant" white flowers in the spring — some people like the scent, while others detest it. The shrub can set seeds, which germinate occasionally, but it has not become invasive in Arkansas. It can be nipped back in the northern tier of counties during cold winter weather.

Q: Lately these strange growths have popped up in a corner of my yard. Usually, there is just one. At first, I thought it was spent fireworks, because of the color and the appearance of the burnt end. Any idea what it is? Could it be some type of mushroom?

A: It is a stinkhorn mushroom. Usually, they appear in mulch in flower beds and have a noxious odor. They grow on dead organic matter. Due to their odor, they attract flies and other insects that feed on the slimy material and carry spores to other places. Luckily, they are short-lived, but they make their presence known by their smell. You can knock it down or destroy it when you see it, but more will follow. It is not harmful and is actually helping to break down organic matter.

Q: I thought my crape myrtles were immune to the scale problem you often address in this column. Then I was out cleaning up my garden, and I found that I had some black branches with white specks, so immune I no longer am. Obviously, I should have saved your article but I did not. What do I do now and can the tree be saved? It looks OK now, and it did bloom nicely this summer. By the way, is there a way to search your articles for future reference, so I don't need to re-ask?

A: One season of attack by crape myrtle bark scale will not kill a tree. If left unchecked, it can grow worse and, over time, weaken the tree. It is too late in the season to apply a systemic insecticide for the scale, so for now, clean up the fallen leaves, and once the trees are bare of foliage, spray with a dormant oil spray — really saturating the branches. This should smother out most of the insects. If the discolored stems are badly covered in black, you can clean them with a soft brush and warm soapy water before spraying with the dormant oil. Next spring as new growth is beginning, you can apply a systemic insecticide around the trees to prevent future damage. I am not 100% sure of searches, but go to my blogsite Plan It Janet — arkansasonline.com/planitjanet — and type in the topic you are looking for in the search area. I tried today with crape myrtle scale, and got several of my articles about it. Subscribers can search the Democrat-Gazette archives by going to the home page at arkansasonline.com and clicking on the word "Archives" in the toolbar; then open the "Search" tab.

Q: A friend was thinning out her garden and shared some of the pink Naked Lady bulbs with me. Where should I plant them, and how deeply?

A: Naked Ladies, or Lycoris squamigera, is a member of the amaryllis family. The bulbs are usually pretty large. Try to pick a location with well-drained soil and at least six hours of sunlight. Plant the bulbs two to three times as deep as the diameter of the bulb, deep in the ground — so, 4-6 inches deep. The foliage should appear in late winter/early spring. After a couple of months of growth, the foliage will die back, and the leafless (naked) flower stems will emerge in late summer. Sometimes Lycoris bulbs do not bloom well the first year after planting, but keep your fingers crossed.