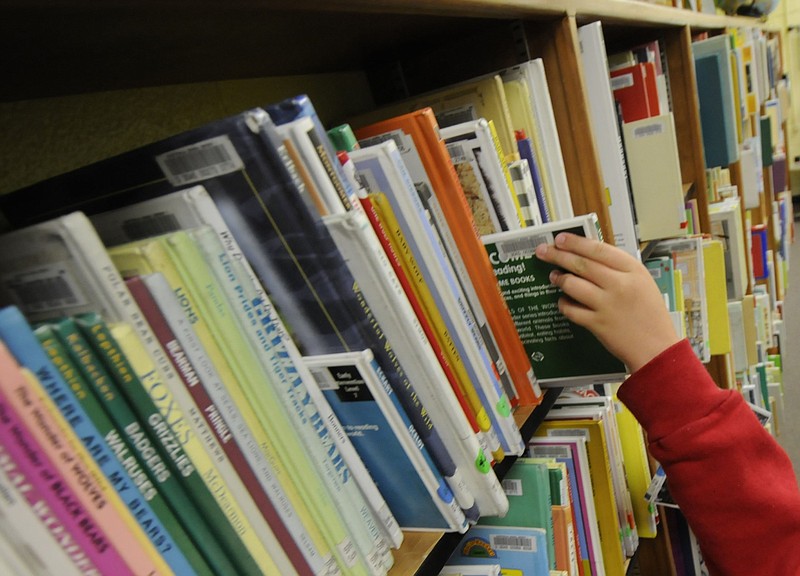 A child reaches for an item from the library bookshelf in this Aug. 17, 2010 file photo. (NWA Democrat-Gazette file photo)

Left with about half of its revenue after voters slashed its funding, the Craighead County Jonesboro Library System is looking for a way to live in its new reality.

Library Director Vanessa Adams said she plans to approach the library board Monday night with a request to hire a consultant.

"I need someone who has the time to do some community outreach," Adams said. "I want someone who can workshop ideas in the community so we can better serve them -- so they are pleased with us. This is all we want."

A consultant could also help the library create a five-year-plan based on that input.

"That is something we have not had in several years," Adams said. "I started in February. I haven't had a chance to work on a strategic plan and that was on my calendar to work on in January."

Adams said the library system is forward funded and will live off of the 2.0 mills collected this year for another year.

"We have enough money to live on next year while we are trying to figure out the next steps," Adams said. "That doesn't mean we won't be making some cuts but we don't know what those will be yet."

Keeping all the branches open will be a priority, Adams said. She said keeping staff also will be important. According to its website, the library system has seven branches.

"Not everyone can make it to Jonesboro and that is why we have branches and we are proud of those," Adams said. "People there dearly need us. For some of them that is the only way they can get Internet and I would hate to take that away."

The group has been critical of a $6 million cash reserve kept by the library.

Another item of concern was a 1-mill increase passed in 1994 for a library expansion that never sunset.

"Often you have a sunset tax after you get what you need," Stevens said. "This one didn't. It went on and on and I probably voted for that tax."

Stevens doesn't blame Adams but the oversight of the board.

"She has only been here a year," Stevens said. "She is not responsible for those things before she came."

Stevens said the Taxed Enough group had the help of an accountant who looked through the library system's finances and showed an option where the library could still function, without losing jobs, on less millage.

Adams said prior to the vote that the library system runs on about $4.2 million annually, with a majority of its revenue coming from property taxes each year.

She said extra funds were built up because of less used in the budget during the pandemic.

Remaining balances have also been kept in savings and investment accounts in order to fund expansions and major repairs, she said.

The library recently expanded its children's department by 2,000 square feet without asking for additional money, she said.

Opponents of the tax cut formed a Save Our Libraries group and argued programs offered by the library would have to be cut, if the initiative was passed.

Phyllis Burkett, chair of the group, previously said the programs are economically beneficial to the community.

But Stevens has argued that cutting unnecessary taxes helps the bottom line for everyone, especially those who are lower income.

The group isn't against all taxes, Stevens said.

"We have always worked on the overage in taxes, Stevens said.

Craighead Citizens Taxed Enough has pointed to Craighead County having one of the highest county millage rates in the state.

The Democrat-Gazette has found in previous analysis that comparing library mills in the state is difficult. Some library systems are supported at the city level, while others county and some extend beyond county lines. The library system in Bentonville doesn't have its own millage but depends on the city budget.

The Central Arkansas Library System received a millage increase from 3.3 to 3.8 when Little Rock voters passed a 0.5-mill increase to local property tax in November 2001. The system is funded by individual millages for Little Rock as well as a 2.1-mill levy in Maumelle and a 1.6-mill levy from the rest of Pulaski and Perry counties.

Many of those involved with Citizens Taxed Enough also have expressed concerns about an LGBT display showcased in the children's section of the library last year.

The organization filed a financial report on Oct 6, reporting $2,000 in donations.

Two of the group's members, Robin Martin and Sharon Stallings, each donated $500. Both previously spoke against the LGBT exhibit during a library meeting in August 2021, according to board minutes.

Darrel Cook, Craighead County Justice of Peace, gave $1,000, the largest donation to the fund, as of filings with the Arkansas Ethics Commission on Oct. 31.

Cook previously filed a Freedom of Information Act lawsuit against the library for not turning over financial documents. The library admitted to a violation during settlement of the suit.

He also has spoken against LGBT exhibits and content promoted to children but also previously said that his concerns about the library finances are separate from the LGBT issue.

Overall the organization received about $6,200 in donations, according to the Oct. 31 report.

Stevens said many of those who showed up at board meetings concerned about the LGBT display, later heard issues regarding finances that also concerned them. She said the issues are separate concerns.

The Save Our Libraries organization received about $39,300 in donations, as of an Oct. 31 report. The donations included a $25,000 donation from romance novelist Nora Roberts, a previous release from the organization states.

Adams said the most important thing for the public to know, is that the library is still there.

"I want them to come in," Adams said. "The library staff appreciates them and we are going to do everything we can to stay as is."