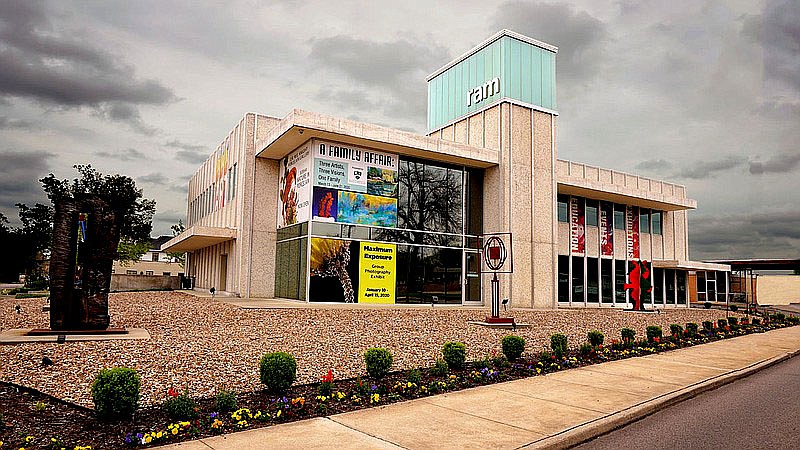 The museum has several events planned throughout the year to celebrate.

The Arkansas Association of University Women created the museum in 1948. It moved to the historic Vaughn-Schaap House in 1968.

Julie Moncrief, the museum's development director, said the museum board realized in 2009 it was time for the organization to become a museum that meets national museum standards, so it renovated the former Superior Federal Bank donated by Arvest Bank and moved there in January 2013.

The museum has renovated and expanded several times in the past decade, currently hosting six galleries across its three floors. It will kick off its 75th anniversary in January with a Pablo Picasso ceramic collection in the main gallery, "Art Center to Museum - The Last 75 Years" and "The RAM Permanent Collection - 75 Years" in the second floor galleries.

The ground floor of the museum displays a permanent collection of porcelain sculptures and pottery, as well as exhibitions from area schools. Student art exhibitions for 2023 include Southside High School of Fort Smith and Rena Elementary School of Van Buren.

Other events planned throughout the year include the museum 75th anniversary gala, "Evening in Paris," as well as a community scavenger hunt, art camps and a block party, concluding with a family day where the museum will bury a time capsule that won't be open for another 75 years.

"We're trying to do the biggest and the best of all the things that we normally do," Moncrief said.

The museum will also continue with its regular programs, which include a monthly paint and sip, RAM Sketch on Zoom and Facebook Live on Tuesday, Drop in and Draw on Thursday and make-and-take art called RAM Saturday. The in-person programs mostly take place in the museum's community studio/classroom, which is also on the ground floor.

"We have the supplies, and you just enjoy yourself and do a craft and take it home," Moncrief said. "We've got one mom who brings her daughter, and her daughter has autism. This is her favorite thing in her life, her mom says. She feels accepted and she lives for RAM Saturday. For years, they've been coming to RAM Saturday, and their entire house is filled with every make and take craft that she's ever made, and she said that they've had to expand it now to her grandmother's house. We love happy stories like that."

The main floor of the museum also has a small, but unique, exhibit called the Touch Gallery, where guests are welcomed and encouraged to touch the art, which includes sculptures and paintings of various mediums.

"This really has two objectives, our Touch Gallery. One is that, yes, when you're a young person, it might not be that exciting to walk through a gallery if you're looking way up on the walls. But we encourage it very much. Our whole mission is to foster art appreciation. So we have tours for young children and school groups to look and talk about art. But to get to touch it is something that really thrills them. To get to feel the texture of this painting, you know they're dying to do that," Moncrief said. "But the other is for sight impaired. We wanted that for children who are sight impaired or adults, just to give them a special experience here at RAM, and so it's served as purpose and it's been wonderful for both of those reasons."

Moncrief said the museum wants to be as accessible to the community as possible, especially since this year they became the official home for local artist John Bell Jr.'s work.

Bell is one of the city's most notable artists, creating historic landscapes of the River Valley and eastern Oklahoma. Bell was also a huge advocate of accessibility for people with disabilities throughout his life, as he had cerebral palsy and used a wheelchair.

The museum will be going through all these 75th anniversary preparations with a new interim director, as the previous director, Lou Meluso, announced his quick retirement in October due to personal reasons.

"On behalf of the board at RAM, I want to express our appreciation for the vision and work of Lou Meluso and wish him well in his retirement," the museum's Board President Jackie Krutsch said. "Lou brought his extensive national museum experience to RAM. His talent helped to elevate our museum to a whole new level. Under his leadership, RAM's offerings grew in sophistication and diversity, setting the stage for the future. As we prepare to celebrate our 75th year, we know that the work of individuals like Lou Meluso will carry RAM forward for the next 75 years."

The museum's interim director is Georgia Hale, the previous provost and vice chancellor for academic affairs at the University of Arkansas at Fort Smith before retiring in June.

Hale said she is new to the museum board, and being interim director gives her the opportunity to learn more about what happens at the museum in order for her to be a better advocate for it.

Moncrief said Hale will likely be the museum director for at least six months as it evaluates what challenges and opportunities they want to face next. She said the community has been and continues to be very supportive of the RAM and all its accomplished over 75 years.

"We couldn't make it without them," she said.