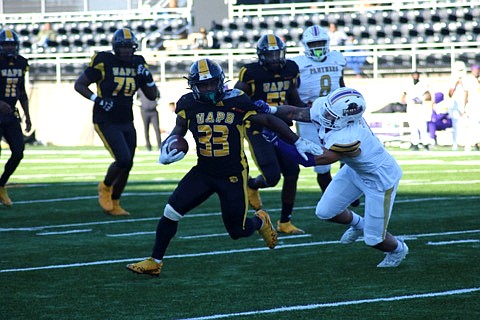 Kayvon Britten of UAPB breaks a tackle from Prairie View A&M in the first half Saturday at Simmons Bank Field. (Special to The Commercial/Jamie Hooks)

The view toward a return trip to the Southwestern Athletic Conference championship game became clearer for Prairie View A&M University — at the expense of an eighth straight loss for the University of Arkansas at Pine Bluff.

Leading 10-0, UAPB had no answer for keeping Prairie View’s quick-strike offense at bay. The Panthers scored 28 unanswered points in less than 15 minutes and marched to a 55-24 in the Golden Lions’ home finale Saturday.

Only 3,148 could stand to brave the dip in temperatures — Saturday’s high was 51 — and see UAPB dip into its longest losing streak since an eight-game slide that extended into the first game of the 2018 season. It also matches the longest single-season skid since 2015.

UAPB (2-8, 0-7 SWAC), which has one game remaining, seemed to find an answer for breaking its long skid by sustaining long drives with fifth-year senior Skyler Perry at quarterback. The Lions scored on their first two drives, first on a 37-yard field goal by Christofer Thompson and then on a 4-yard Kayvon Britten run.

Perry, who had 171 yards on 15-of-27 passing, extended the second drive with a 54-yard bomb to Raequan Prince.

After that series, the Lions simply couldn’t keep up with the Panthers (6-4, 5-2) anymore.

“It was just a couple of minor mistakes and things like that, that set us behind, that knocked us off that wheel we had,” Perry said. “They just kind of stampeded after that.”

THE GAME CHANGED WHEN …

Prairie View scored on four of its last five drives of the first half and on its first four drives of the second half, running out the clock on the fifth. The Panthers averaged 1 minute, 34, seconds on their first-half scoring drives, while Trazon Connley completed 8 of 15 passes for 193 yards and 5 touchdowns.

Connley’s 45-yard toss to Jailon Howard set up a 4-yard touchdown run by Jaden Stewart, his first of two scores on the day, to put the Panthers on the board. Connley then threw touchdown passes to Travion Jones (15 yards), Howard (45) and Ty Holden (14), all in the second half, as a 10-0 hole turned into a 28-10 lead.

“It just took a little bit of yelling here and there to get them going,” Panthers Coach Bubba McDowell said. “Those guys know what they can do and how they can do it, and it’s just a matter of going out and executing.” Howard’s TD catch was the only play of a drive following a UAPB punt. The Lions’ Maurice Lloyd fumbled a long kickoff return, and the Panthers cashed in with a five-play, 42-yard drive.

The Lions seemed to catch a break when Kenji Lewis recovered a mishandled snap by Prairie View’s punter to pull within 28-17 with 37 seconds left before halftime.

“That’s what we thought about, coming out, defense getting a stop and giving us a chance,” Perry said. “It’s minor mistakes from everywhere, and time of possession killed us.” Prairie View led 48-17 through three quarters, thanks to Bernard Goodwater’s 9-yard and Jahquan Bloomfield’s 40-yard touchdown receptions from Connley, as well as a 29-yard Chris Herron run. Herron, who backed up Connley, completed his only pass attempt to Justin Hammond from 17 yards out with 5:33 left in the game.

Lewis fashioned the final score with a 25-yard catch on Perry’s only TD pass with 2:31 left in the game.

Prairie View has dropped 50 or more points in three of its past four games. The only game it failed to reach 50 was last week’s 23-16 overtime loss to Alcorn State University, a game that has kept the SWAC Western Division race close.

“It doesn’t [surprise me] because I know who these guys are,” McDowell said. “Just go out, do what we’re capable of doing when we’re told to do it, and we can put up points like that because we’re pretty fast on defense and offense.” Prairie View leads Southern University and Alcorn State by one game in the West. Texas Southern University, which began the day tied with Southern and Alcorn State at 3-3 in the division, played Grambling State University later Saturday.

Connley for his 5 touchdown passes.

Britten rushed 18 times for 87 yards. He also had the most catches for the Lions, but only for 17 yards. 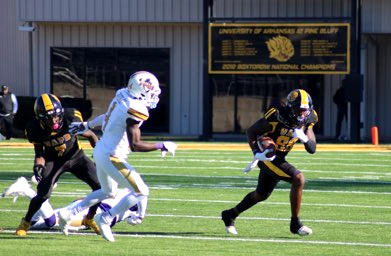 Stanley Oxford of UAPB catches and runs for yardage around Logan Jackson of Prairie View A&M in the first half Saturday at Simmons Bank Field. (Special to The Commercial/Jamie Hooks) 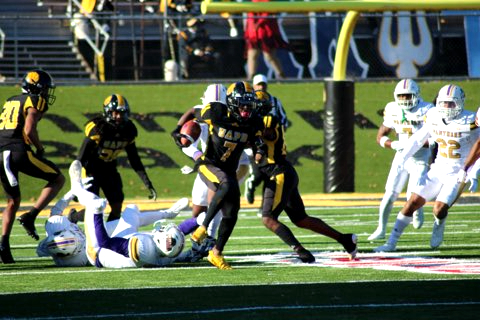 Daemon Dawkins of UAPB bounces off would-be tacklers and turns upfield against Prairie View A&M on Saturday at Simmons Bank Field. (Special to The Commercial/Jamie Hooks)