OPINION | ON BOOKS: ‘Song’ a book you can judge by its cover 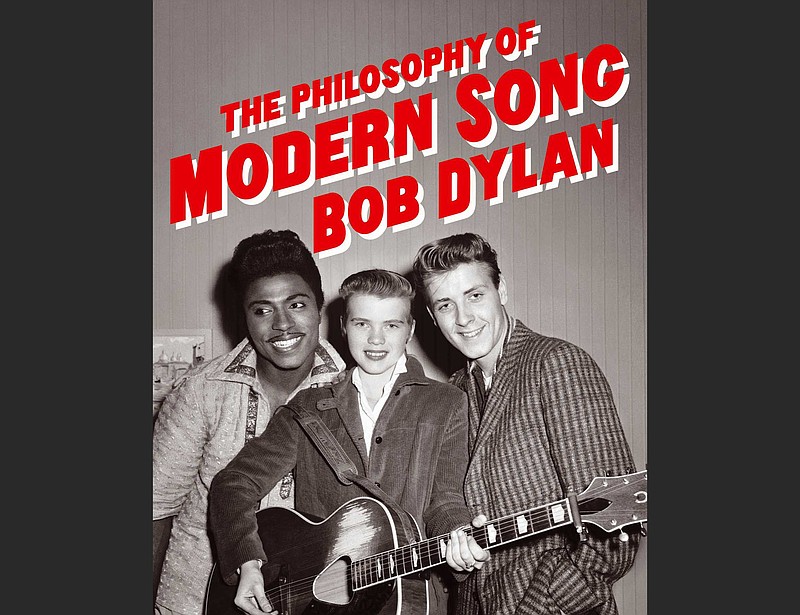 "The Philosophy of Modern Song" by Bob Dylan (Simon & Shuster, $45)

One thing you don't do is begrudge an old man his position or his place.

It makes you look like a begrudger, like maybe you're jealous of his stately pleasure dome with the hammered copper roof in Malibu. And she of the sloe eyes doesn't like that; she's more after the immaculate-hearted type that knows full well what he don't know to begin with. Such as what heartaches the old codger might embrace. And you ain't no master thief, you're not going to rob them — whoever they are.

No, you just want to sit back in that chair right there and let Z. show you how it's done.

First thing you'll want to understand is that all titles are ironic. There's no "philosophy" here; most of these songs are more properly described as mid-century modern. It's just a stand-up routine by an old carny comedian in a black twill pearl-snap cowboy shirt and a sombrero cordobes, like the one Zorro wears, with the little dangling tassels.

He's got a pencil-thin mustache (the Boston Blackie kind) and his left fist is arthritically closed around the knob of a toy cane, like the one with which William Zantzinger smote poor Hattie Carroll for serving him too slow.

He's also got a contract to fulfill, and a closet full of curios he needs to put to use, the stroke to hire (or have hired on his behalf) a major art director, and an ability to clear archival photographs with a single bound.

This is a book you can judge by its cover. There's Little Richard Penniman, he of the remarkably large head. A little later on, he'll get three paragraphs and another photo, and the Brylcreem-ed author will credit him with taking "speaking in tongues right out of the sweaty canvas [revival] tent" and putting it "on the mainstream radio" by smuggling the codes of the Black homosexual (Jesus-struck variety) into the suburban bedrooms of the white teenage demographic.

Later on, there's another paragraph, ostensibly about Little Richard's version of "Long Tall Sally." This is it:

Long Tall Sally was 12-feet tall. She was part of the old biblical days in Samaria from the tribe called the Nephilim. They were giants that lived back before the the cataclysm of the flood. You can see shots of these giants' skulls and such. There were people as tall as one-story buildings. They've uncovered bones of these giants in Egypt and Iraq. And she was built for speed, she could run like a deer. And Uncle John was her counterpart giant. Little Richard is a giant of a different kind, but so as not to freak anybody out he refers to himself as little, so as not to scare anybody.

And then, on the right, looking like he should, is Eddie Cochran, not yet 20 years old, fresh off his performance of "Twenty Flight Rock" in "The Girl Can't Help It," a film for which we're still awaiting the definitive Criterion Collection Director-Approved Edition. They are about to begin a tour of Australia, having just disembarked from a plane at the Sydney airport on Sept. 28, 1957.

Eddie is smiling in a sly way, focused on photographer Bruce Perry of The Sydney Morning Herald, while Richard's attention is wandering off to his right — he's checking something out; maybe a troubling ghost. This was the tour where he suddenly felt the spirit and quit the devil's music (not for the last time).

That jammed up Eddie and Gene Vincent, who was also on the bill, along with Australian Johnny O'Keefe, who'd later become the first Aussie rock 'n' roller to tour the U.S.

But who is the gamine in the center? Turns out she's Alis Lesley (born either Alice Lesley or Alice Leslie), who was three days younger than Cochran. Alis, who is 84 years old, was a rockabilly singer from Phoenix who was billed as "the female Elvis Presley." Continuing the adjacent-to-glory theme, she'd been discovered by Kathryn Godfrey, the less famous sister of Arthur Godfrey, who was locally famous in Phoenix. She had recently scored her only national hit record, a two-sided affair with "He Will Come Back to Me" on the A side and "Heartbreak Harry" on the flip, which got her on the tour with Richard.

Neither Eddie nor Alis has a song appraised by the author, which isn't surprising given there are only 66 entries and it's the great entertainer's curated list here, which famously has only four women on it and certainly not that witchy, truthy-mouthed Joni Mitchell.

That's not wrong, despite the essays in the New Statesman and stuff; these days no one should mistake Bob Dylan for a progressive, much less a social justice warrior. His spirit animal — another bit of culture it's no longer cool to appropriate — is Frank Sinatra. All we're getting here is a map of his taste and a cool picture book, which is plenty for the asking price if you do your comparison shopping.

It is a fascinating book in the same way looking at someone else's book shelves can be fascinating. We presume this music matters to him, and when there's a point of correspondence — say, Sonny Burgess' "Feel So Good," which gets a full-throated essay — there's a little frisson of "affirmation." And sometimes the Big Man picks a clunker, like Jackson Browne's "The Pretender," an almost great song ruined by an uncharacteristic lack of craftsmanship.

I love J.B. but almost anything of his is better than this particular track, which is both sterile and awkward in the wrong ways. People use "pretentious" as an all-purpose term of obliteration these days, but it's the revolver I reach for when I hear Jackson rhyme "pretender" with "ice cream vendor." What makes it so much worse is the image of making love with sunglasses on, which is so '70 SoCal potent. "The Pretender" is a screenplay that needed at least another pass or two.

You want a verdict on the reluctant Pulitzer Prize winner's latest work? Well, he didn't work too hard and he had fun, which is what you are supposed to when you are 81 years old and rich as David Geffen. Old Man Midas done touched this book; the least we can do is buy it, I s'pose.

"The Philosophy of Modern Song" by Bob Dylan (Simon & Shuster, $45)

Print Headline: ‘Song’: You can judge this book by its cover