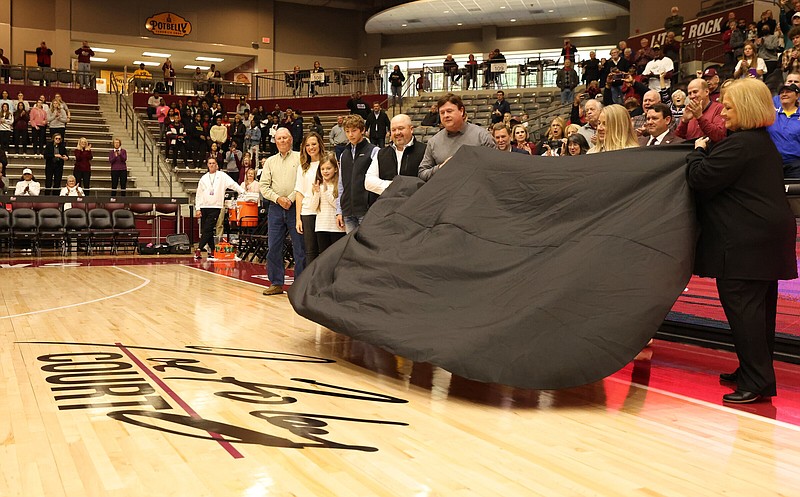 University of Arkansas-Little Rock Coach Joe Foley, the third-winningest active coach in Division I women's basketball, stepped into the tunnel in the southeast corner of the Jack Stephens Center.

His former players, nearly four decades worth, extended a tunnel onto the floor that would soon be named for Foley.

A few were decked out in green and gold, the colors of Division II Arkansas Tech, where Foley began as a head coach in 1987. Many others donned the Trojans' maroon and silver.

They were all there for the same reason.

An announced crowd of 3,255 descended on Little Rock as UALR formally unveiled Joe Foley Court Sunday afternoon, recognizing the coach who, over 20 seasons, has transformed the Trojan program from a perennial cellar-dweller to one of the most highly regarded mid-majors in the nation.

Although UALR was unable to dial up another one of the power-conference upsets that have become a staple of Foley's Trojan tenure -- falling 58-40 to Ole Miss -- the 67-year-old coach could only smile when reflecting on the day in his postgame news conference.

"[I had] tears of joy," Foley said. "You see all those kids and know what all they've accomplished and to be able to be part of a group like that it's pretty awesome. So being able to share [today] with all those people, that was a great feeling."

Once on-court, UALR recognized Foley with a video presentation that featured the highlights of his career at the helm of the Trojans. It's a run that has included five NCAA Tournament berths and four Sun Belt Coach of the Year honors.

Foley then -- along with wife Chris as well as children C.J. and Maranda -- lifted the black drape in front of the UALR bench to reveal the Joe Foley Court sticker that will become a permanent mark on the Jack Stephens Center hardwood next summer.

"We've all hung a lot of banners together," Foley said, addressing his 60 or so former players in attendance. "They can come and go but the relationships are unbelievable and they're here to stay."

The game itself was a tribute to Foley in its style. Except it was the Rebels flipping the script on the Trojans.

Ole Miss (3-0) held UALR to four points in the second quarter and six points in the fourth, forcing the Trojans into 20 turnovers -- more than all but two games last season.

"We've got a lot of new kids out on the floor and I knew they were going to come after us with the pressure," Foley said of the Rebels. "[Coach Yolett McPhee-McCuin] does a great job teaching man-switching defense -- I've watched them on film, I watched them last year."

UALR (1-1) could never get into an offensive rhythm not just because of how Ole Miss challenged the Trojans in the half-court but also with an aggressive 1-2-1-1 full-court zone press.

But UALR's defense kept the hosts within striking distance into the third quarter, forcing 18 Rebel turnovers in the game.

After not attempting a three-pointer in the game's first 27 minutes, the Trojans drilled a pair in a span of just more than 90 seconds, pulling to within 37-34.

They wouldn't get any closer. Ole Miss scored the next 10 points and closed on a 19-6 run over 11-plus minutes.

That UALR hung tough was of no surprise to the Rebels' head coach.

"They wanted to win for [Coach Foley]," McPhee-McCuin said. "When we started to talk about playing Little Rock here, I was hesitant because I'm like, 'Man, they take down SEC teams every year.' ... I knew he would have his team prepared."

And for current Trojan guard Tia Harvey, Sunday was yet another reminder of the special opportunity she has in getting to play for an all-time coaching great.

"It was really special," said Harvey, who led UALR with 13 points. "I never really understood why he did things the way that he did them at first, but me now being the upperclassman and a little bit more mature, [I do]...and I definitely think he deserves this."