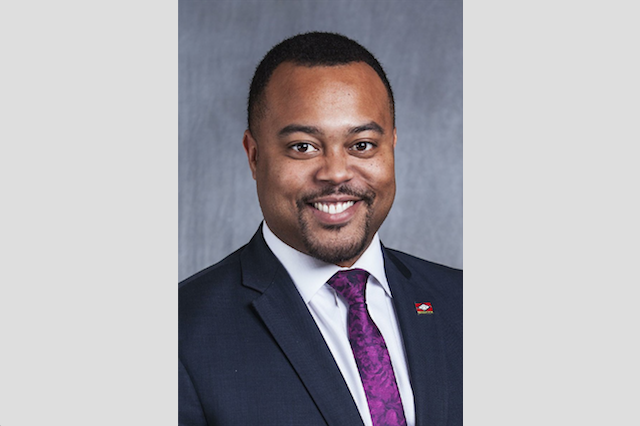 Three days after voters elected Little Rock Mayor Frank Scott Jr. to a second term, his former chief of staff, Charles Blake, on Twitter uncorked criticism of Baker Kurrus, one of Scott's rivals in the 2018 election.

Scott defeated Landers, Greg Henderson and Glen Schwarz with nearly 50% of the vote.

Blake, 39, served as Scott's chief of staff from 2019 through January 2022. He now works for the public-affairs firm Think Rubix as vice principal.

Blake was the campaign manager during Scott's 2018 bid for mayor and later resigned his position as the top Democratic lawmaker in the Arkansas House of Representatives in order to work for the mayor's office.

Kurrus, 68, is an attorney and consultant who served as the state-appointed superintendent of the Little Rock School District from 2015 to 2016. Scott defeated him in a December 2018 runoff election to succeed outgoing Little Rock Mayor Mark Stodola.

Blake made his recent comments in a Twitter thread that included Arkansas Democrat-Gazette columnist John Brummett and an anonymous Scott supporter who tweets under the username @LRproud501.

On Nov. 9, Brummett wrote on Twitter that Landers "would have been a figurehead with baker kurrus doing the actual job."

At 11 p.m. Friday, Blake responded, "D***, Baker keep taking L's. Like when he went out of his [way to] criticize and try to delegitimize a minority led company. Plot Twist, a company that he has also done work with."

He included a screenshot of a Kurrus statement that was published by the Arkansas Times on Sept. 30. A version of the statement appeared as an op-ed in the Democrat-Gazette the day before.

In the section of the piece Blake highlighted, Kurrus referred to the decision to tap Think Rubix as a contractor for LITFest, a new city-sponsored festival that was supposed to take place in early October.

LITFest collapsed ahead of its Oct. 7-9 dates when the city manager terminated a $45,000 contract with Think Rubix amid legal concerns about the agreement.

The festival and other decisions under Scott represented "the sort of machine politics that progressive Arkansans like Rockefeller, Bumpers and Pryor worked hard to eliminate," Kurrus wrote in his piece.

Additionally, Blake posted a link to a Think Rubix web page that referenced the firm's work associated with a public campaign in favor of a Little Rock School District millage extension ahead of a 2021 special election.

"Baker has continued to show us he is untrustworthy (opposing return of LR School Board), sketchy, vindictive, and a sore loser," Blake wrote on Twitter at one point. "His backing of Landers and his trash reasons had the opposite [effect] than intended. Why do you think he would do better?"

On Monday, in response to Blake's comments, Kurrus recalled that a Think Rubix crew had filmed him as part of the 2021 millage campaign, but he suggested that was the extent of his interactions with the firm.

He said it "has nothing to do with what I think about Think Rubix. I think Think Rubix and Charles Blake need to give back the money that they took from the city and apologize to the public."

He said by phone that he had worked hard to try to regain local control of the school district. Kurrus said that "it's a foolish statement on his part. I think he would like to have the attention directed to me or to somebody else -- anybody but him and Think Rubix."

Kurrus argued that he was not seeking to be vindictive. "I'm not a sore loser -- life's good for me. I'm happy, everything's fine," Kurrus said.

He said he thought Landers was the better candidate because Blake and others had failed the city, referring to "inside deals" and other matters that he said have been widely reported.

Nevertheless, Kurrus added, "I have nothing personal against Charles Blake and never will. I'm not gonna deal in that currency."

Blake did not respond to a request for comment via email Monday.