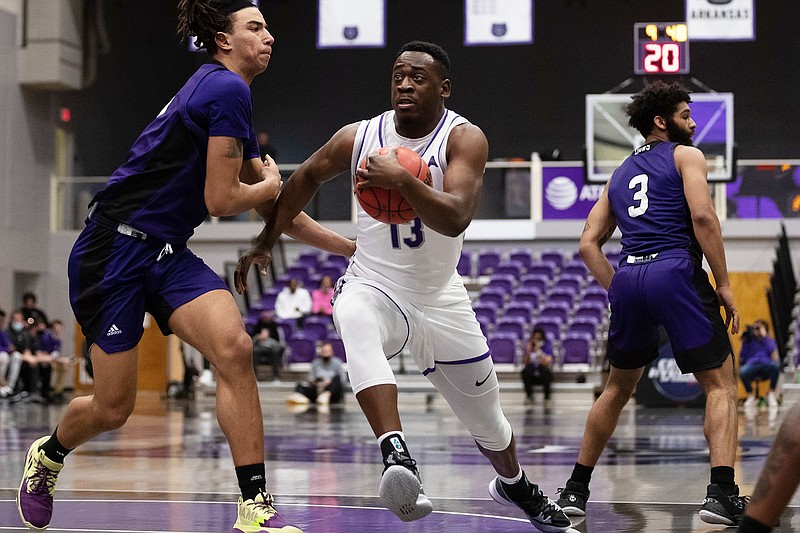 CONWAY -- A little less than a half-hour before tip-off Monday night, a group of about 20 Central Arkansas students took their spot across from the Bears' bench.

When the University of Arkansas-Little Rock came out for warm-ups, the cadre got their chirps in with the Trojans. Then one of the students asked for the ball and a UALR player happily obliged.

The UCA student, standing in the second row of the bleachers, promptly drained his shot, catching nothing but net on the way down.

The Bears eased past the Trojans 82-71 at the Farris Center in the first of two meetings between the local rivals this season. UCA got a game-high 26 points from Eddy Kayouloud and Collin Cooper added 22, overwhelming a UALR team that, while forcing the Bears in 20 turnovers, committed 17 costly giveaways of their own.

"This was a great environment for a college basketball game," UCA Coach Anthony Boone said. "The guys gave great effort and played hard, but I think our crowd here certainly energized our guys, especially those who had to play a lot of minutes there for a long stretch in the second half."

Trailing 37-30 at halftime, the Trojans saw their deficit swell to as many as 16 in the early stages of the second half, only to pull within seven on three separate occasions.

But the big swing came on a non-call that had UALR Coach Darrell Walker fuming. After Masai Olowokere hit inside for the Bears to make it 64-55, the Trojans thought they'd drawn a foul on the other end on a Jordan Jefferson jump shot.

Instead, the referees kept their whistles silent and UCA (2-1) pushed the other way, finding Cooper open on the wing for a vital three-pointer that sent the home crowd into a frenzy. Walker called for timeout and spent a solid 30 seconds debating with the officials, nearly earning himself a technical foul.

It was one of six three-pointers that Cooper, a Fayetteville alumnus, hit on the night, and UALR (1-2) wouldn't get any closer than 10 points the rest of the way.

"We've got a lot of guys who can post up, play inside-out," Cooper said. "If we get it inside, they've got to collapse or we're going to get two points and that's when my teammates found me open."

Although the Trojans were within touching distance of the Bears for a large portion of the night, Walker pointed to mistakes in the first half that proved costly later on. UALR committed 12 turnovers in the first half, leading to 15 UCA points.

"Our point-guard play was atrocious," Walker said. "I thought C.J. [White] was atrocious, I thought D.J. [Smith] was atrocious. They didn't show up at all and I decided to put Jordan [Jefferson] in the game. Jordan gave us a big lift -- I knew he was out there."

But it was more than just the turnovers that had Walker frustrated.

"We're not running our stuff the way we need to run it," he continued. "We're rebounding the ball pretty good, our pace of play is pretty good. Let's just be honest: We've got to make some shots and some layups. ... We didn't do that tonight."