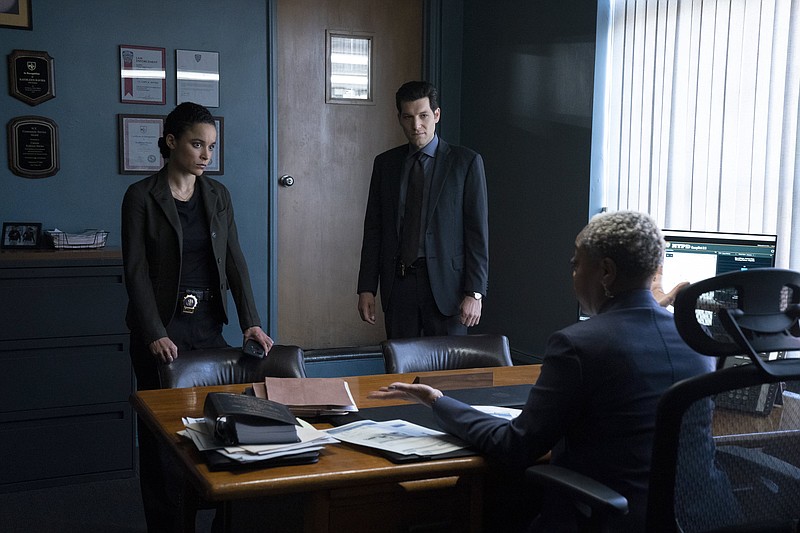 Juliana Canfield (from left), Jeff Wilbusch and Karen Robinson perform in a scene from “The Calling” on Peacock. (Peacock via AP/Heidi Gutman)

NEW YORK — Viewers of "The Calling" will quickly learn it isn't a typical TV police procedural. Just two minutes in, the lead detective of a fresh murder bows quietly over the dead body — and prays.

Detective Avraham Avraham is an unusual figure in the New York Police Department: a keen observer of human behavior from his study of philosophy and his Orthodox Jewish faith.

"I'm proud to play a Jewish detective that is religious," says actor Jeff Wilbusch, who plays Avraham. "It's very unique to have such a show. And I think it's an important story to tell."

Based on a series of books by Israeli crime writer Dror Mishani, "The Calling" puts a Jewish detective who quotes from the Torah front and center on U.S. prime time during a new spasm of antisemitism.

"We're living in tricky times, sad times," Wilbusch says. "I believe very much in the power of storytelling. You know, I don't know how much power I have, but I'm very proud of the series."

"The Calling" is a quirky, more quiet show, using melodies that borrow from the Middle East and cinematography ground into the gritty streets of New York, where it was filmed during 2022's spring and summer. One recurring character is a homeless former professor.

"This is a different animal. It's not going to be for everyone," Kelley says. "It's a battle to wrestle for the viewer's attention and when you use as your vehicle to wrestle a more quiet character in a quiet show, it brings certain challenges with it."

Wilbusch's Avraham, or Avi to his colleagues, is a lone-wolf of a detective — brilliant but a bit stand-offish and sometimes too blunt. He doodles pictures of fish on napkins to relax and can read a room — and a suspect — like no other detective.

"The mood of the show is intentionally enigmatic," Canfield says. "Avi is a detective who operates in a different way from your run-of-the-mill detective. And I think the show mirrors his approach in a lot of ways, which is to say the show and Avi are both deeply interested in character and human behavior."

The first season centers on the case of a missing teenager, which stretches out over the eight, hourlong episodes. The detectives run down every lead, from school friends and his sister to his unhappy mother and stern father. Avraham is always trying to get inside the head of a suspect or victim, even sitting quietly on the edge of the missing teen's bed to feel his essence.

"He sees the world with empathy," Wilbusch says. "He believes every single one of us is entitled to infinite respect — doesn't matter where he comes from, which faith he belongs to, and the color of his skin."

It's a character that immediately intrigued the Israeli-born actor. Few acting jobs led him to prepare by asking real homicide detectives how they decompress after work while also reading essays about Hellenistic-period Stoics like Marcus Aurelius.

In one scene, Canfield's character notices the shelves of books in her partner's cubicle. "There's a copy of the Torah and the Talmud, but there are also books written by great Greek philosophers and classical philosophers. So he uses Judaism as a sort of entry point into a way of thinking about the world philosophically. And that's how he approached his detective work."

The interplay between Avraham and Canfield's rookie detective is delightful. She is an ambitious, by-the-book cop who sees him use his pools of knowledge and hyper-detailed observations of social behavior to crack cases. "You can't learn what he does," warns her commander. "Yes, I can," she responds.

She becomes a yin to his yang. "She isn't put off by his sometimes alienating tendencies. And I think she's also someone who has things to teach him about how to stay grounded and how to come out of his cloud-covered genius castle in the sky," Canfield says.

"She manages to surprise him," Wilbusch says. "They build a very interesting relationship that they never knew really that they needed so badly."

The original book was set in Tel Aviv. Kelley and the creators decided when moving it to New York that they needed to keep religion and spirituality at its core.

"We just thought, 'We're not going to shy away from that.' Far from being alienating, it's engrossing and it's enriching with the characters. So we decided to sail right into it," Kelley says.