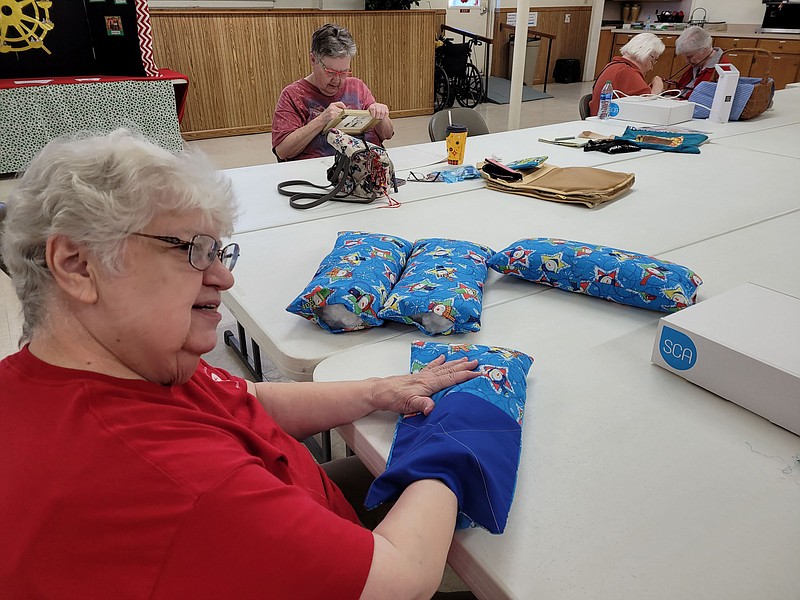 The Grand Prairie Quilt Society met on Wednesday at the fellowship hall of First Christian Church in Stuttgart with eight members present.

The leader opened the meeting with the Thought for the Day, "Quilting is the answer; it doesn't matter what the question is."

The October minutes and treasurer's report were given. Birthday greetings were extended to a member.

Members were reminded to bring dry beans for the ICCM Food Bank in Stuttgart. Everyone also greeted a member with hugs of welcome after a long absence.

During Show and Share, a member showed several pillows she made for Arkansas Children's Hospital. Another had an "Around the Square" quilt while another showed her needlepoint, according to a news release.

After the business session, everyone had lunch.

"It's so nice to enjoy a time together again," a spokesman said.

After eating, everyone worked on their projects. A member stuffed pillows for Arkansas Children's Hospital.

Others needle pointed, sewed pillows, ironed and assembled strip quilt blocks, and embroidered on a dish towel and teddy bear.

Plans were finalized for the Christmas party and potluck on Dec. 14 on the regular meeting day. The group will meet at 10 a.m. and have a short business meeting followed by the Round Robin game. Everyone who wants to play needs to bring five small things. After the game, the group will have a potluck lunch followed by visiting, sharing projects, and making plans for the New Year.

"Bring a dish to share and come join us," a spokesman said of the next meeting.