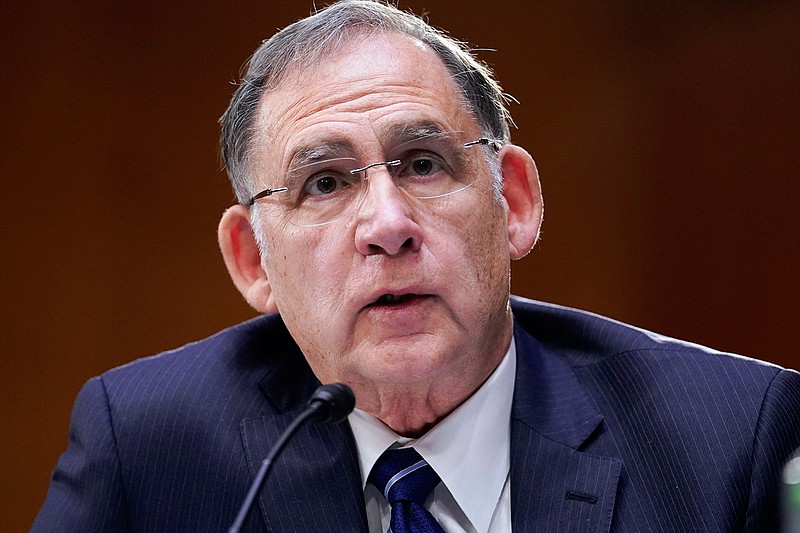 Today marks the first anniversary of Biden's signature on legislation creating the Infrastructure Investment and Jobs Act, a $1.2 trillion law addressing physical infrastructure needs such as roads and bridges, high-speed internet access and utility improvements. Officials have announced hundreds of projects in the last year related to the law, including more than 120 efforts in Arkansas worth $2.7 billion.

"We've hit the ground running to make a better America, and we're on our way to it," Mitch Landrieu, the White House's senior advisor overseeing the law's implementation, told reporters on Monday.

The American Society of Civil Engineers gave Arkansas a C- in the organization's 2021 Infrastructure Report Card; the body noted the state's poor infrastructure "impedes Arkansas's ability to compete in an increasingly global marketplace."

The American Society of Civil Engineers issued the report card before Congress and Biden approved the infrastructure law.

Over the past year, officials have announced billions of dollars for projects in Arkansas. According to the White House, this includes $1.5 billion for road and highway improvements in Arkansas since November 2021. And the state is projected to receive around $3.9 billion in the law's first five years.

Among the work being funded by the law, $93 million was dedicated toward replacing lead water service lines in Arkansas in the past year. An additional $42 million will go toward similar projects in the state during the current fiscal year.

Other projects receiving funding include $13 million for additions to Northwest Arkansas National Airport, $32 million for reducing flood risks in Pine Bluff, and more than $200 million for improving the river navigation network connecting Arkansas and Oklahoma.

The White House views the law as part of the Biden administration's larger economic plan. Officials have coupled the Infrastructure Investment and Jobs Act with a measure passed earlier this year investing billions of dollars into computer chip production as well as the Inflation Reduction Act, the sweeping statute allocating funds toward energy production, manufacturing and health care subsidies.

"Infrastructure is at the center of that," National Economic Council Director Brian Deese said. "This law is laying the foundation not only for an infrastructure decade, but a manufacturing decade in America by building a stronger backbone for American supply chains and American production."

Deese noted the law makes "strategic, long-term investments" in parts of the economy with the highest long-term potential. He stated funding has to focus on raising public investments and improving the country's global economic competitiveness, adding investments in infrastructure lure private investors.

Arkansas' congressional delegation voted unanimously against the infrastructure measure, citing concerns about how the bill could affect inflation and consumer prices.

On Monday, Republican U.S. Sen. John Boozman, who sits on the Senate Environment and Public Works Committee, echoed those concerns to the Arkansas Democrat-Gazette.

"Massive federal spending under this administration has fueled decades-high inflation," Boozman, of Rogers, said. "The infrastructure package approved by President Biden included additional spending on partisan priorities like electric vehicles that do little to help contain costs. I have a long record of supporting bipartisan infrastructure funding, and will continue to do so in a manner that addresses the country's true needs."

According to the White House, $19 million has been allocated so far for building electric vehicle charging stations across Arkansas. The state is expected to receive $54 million for such efforts over the law's first five years.

The Senate Environment and Public Works Committee's responsibilities include overseeing bridges and other public works, as well as highway maintenance and water resources. The committee's leaders -- Democrat Tom Carper of Delaware and Republican Shelley Moore Capito of West Virginia -- led efforts to get the bill through Congress; Capito was one of 19 Republicans who joined Democrats on the measure.

Deese downplayed inflation concerns, describing the law as a "long-term investment" in addressing issues such as transportation system improvements and consumer access to products, thus reducing prices over time.

"You can see that in practical ways," he said. "When we improve operating speeds at ports by doing infrastructure upgrades -- both physical and digital -- you can move goods through ports more quickly and efficiently. That lowers costs."

As lawmakers prepare for the end of the year, Deese and Landrieu noted Tuesday's election as a vote of confidence for Biden's agenda. Democrats are projected to maintain control of the Senate, while Republicans are slated to become the majority party in the House of Representatives, although by a slim margin.

"The president ran on, laid out, and is driving toward this strategy that is rebuilding the country and rebuilding the manufacturing base," Deese said. "I think, notwithstanding some of the talking points that went into the election, I think the outcome of the election speaks for itself."