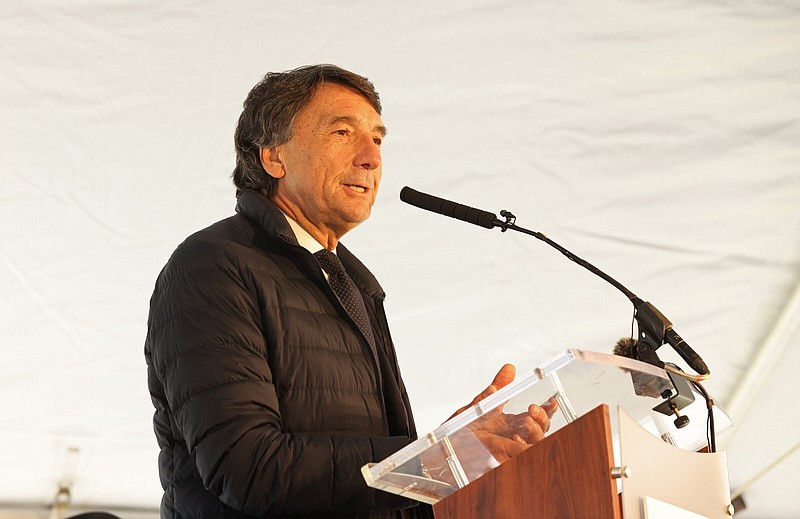 Fiocchi of America CEO Maurizio Negro speaks during an event at the offices of the Port of Little Rock announcing a new manufacturing plant to produce lead-free primers by the Italian company Tuesday, Nov. 15, 2022. (Arkansas Democrat-Gazette/Colin Murphey)

An Italian ammunition producer on Tuesday announced the expansion of its manufacturing operations in Little Rock with a $41.5 million investment that will add 120 new jobs at the Port of Little Rock.

Fiocchi Group, a global manufacturer of defensive, target and hunting ammunition, will build on 281 acres at the port, an expansion that will nearly double the company's employment in Little Rock. The new operation will produce primer supply for the broader ammunition manufacturing segment.

The company's first Little Rock facility, announced just more than two years ago, has about 130 employees working at a facility on 145th Street.

"We see different opportunities in the U.S. and we decided to come here," he said in making the announcement at the port.

Arkansas was one of five sites in three states being considered for the expansion, with Negro noting the company "found a great culture and very great fit" with the state's business environment. "This is a key to success."

The new facility will be one of only six primer manufacturing operations in the U.S. and the only dedicated lead-free primer plant in the world.

"This groundbreaking represents another significant milestone in Fiocchi's long-term plan to strengthen and expand our manufacturing capabilities and to bolster primer supplies not only for Fiocchi products but also to increase supplies for the ammunition manufacturing industry at large," Negro said.

"Our focus on Little Rock for this major expansion comes from an ideal alignment of several considerations," Fiocchi of America President and Chief Executive Officer Anthony Acitelli said in a statement. "Aside from our strong ties with the state and local governments, Arkansas has a highly experienced and energetic labor force to call upon. Furthermore, streamlined logistics with other plant operations combined with management and supply chain efficiencies make Little Rock a logical choice. We will also benefit from logistical synergies with our ammo manufacturing industry partners."

"Expansion of the firearms and ammunition industry has been a priority and a target during my administration," Hutchinson said at Tuesday's announcement, which drew local and regional leaders, including Little Rock Mayor Frank Scott Jr. and Pulaski County Judge Barry Hyde.

Hutchinson applauded the company for collaborating with the state under competitive conditions.

"You looked at other states, you had choices to make and we had to compete for that; we're grateful you had the comfort level to select Arkansas," the governor said.

The manufacturer was awarded $3 million from the governor's quick action closing fund and it also will qualify for the tax back program, which provides sales and use tax refunds on the purchase of building materials and taxable machinery and equipment, and the advantage Arkansas initiative, which allows fort state income tax credit for job creation based on the payroll of new, full-time and permanent employees.

Print Headline: Fiocchi to expand at Port of Little Rock