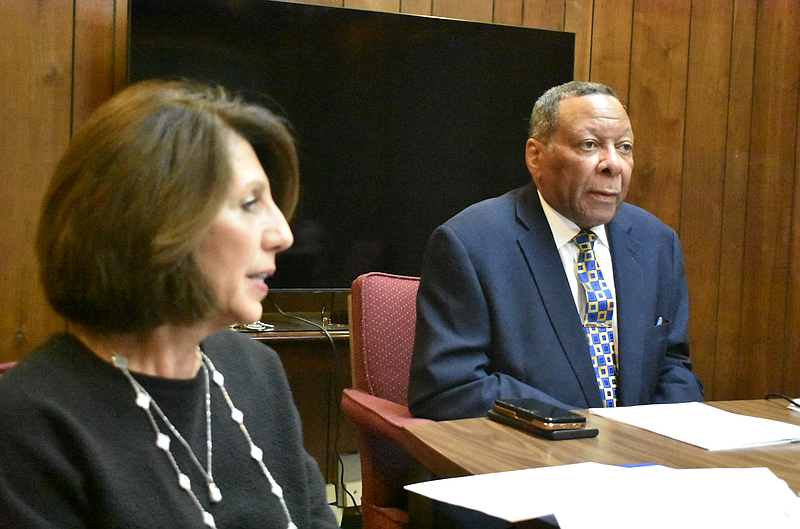 Marriott Hotels will construct a new Courtyard by Marriott at the location of the old Plaza Hotel next to the Pine Bluff Convention Center, a city official announced Wednesday.

Joseph McCorvey, executive director of the Civic Auditorium Complex Commission (CACC) and the Convention Center, shared the news with commissioners inside the arena boardroom.

It was a moment McCorvey worked nearly five years on the job to make happen.

“It gives it new life, as far as the Convention Center,” said McCorvey, who has led the Convention Center since Jan. 2, 2018. “It will attract new businesses, because most of the associations we tried to attract to Pine Bluff, they would not come because of the current condition of the hotel. It would help out tremendously and bring new jobs to the area, and of course, the taxes from the rooms would go to the A&P [city Advertising and Planning] Commission.”

The price tag for the project is an estimated $20 million to $22 million, including demolition of the five-story, 200-room Plaza Hotel, McCorvey said. The Plaza Hotel was built in 1988 as Wilson World but has not been in operation since falling into disrepair in recent years.

The deal calls for Marriott to manage the new hotel for 30 years. Money from the Go Forward Pine Bluff tax went toward Marriott’s licensing fees.

“It’s a win for Go Forward, a win for the city of Pine Bluff that Marriott saw enough here to brand the hotel,” Go Forward CEO Ryan Watley said. “I’ll also say the money spent toward the hotel wasn’t in vain. It’s necessary and it’s an important piece of all that’s going on downtown.”

City Council members recently approved funding toward development of a cultural district in the downtown area of Pine Bluff, which has seen what Watley termed “an entrepreneurial district” blossom with Go Forward’s help in recent years.

“And now, people can have somewhere to stay while they come to experience all this,” Watley said. “It’s all coming together. It’s just a matter of time before the explosion happens, in a positive way.”

Having Marriott’s flag on the upcoming 125-room hotel with a bistro will attract more events to come to the arena, McCorvey and Watley said.

The P3 Group, a public-private partnership developer behind many projects in Pine Bluff, is seeking out investment firms for financing. Marriott will utilize Beechwood Pinnacle Hotels, a management and development company from Little Rock, for architecture and contractor work.

McCorvey expects financing of the project to be finalized by the first quarter of 2023. The hotel, he said, will take “roughly” 15 to 18 months to complete if everything goes to plan.

Wednesday’s announcement came as a sign that Pine Bluff is “moving on up” as a city, CACC Chair Lisa Kosmitis said. She congratulated commissioners for their work in keeping the project moving ahead.

“We’re getting there. It takes baby steps to make giant steps,” she said. “I think that’s where we’re going right now.”

Asked about the deficit, McCorvey explained the Convention Center has hosted a number of festivals since the covid-19 pandemic impacted the center and led to a lack of business. Renovations to the center, including painting of the auditorium and arena ceilings, have also been made.