3rd downs a struggle for ASU 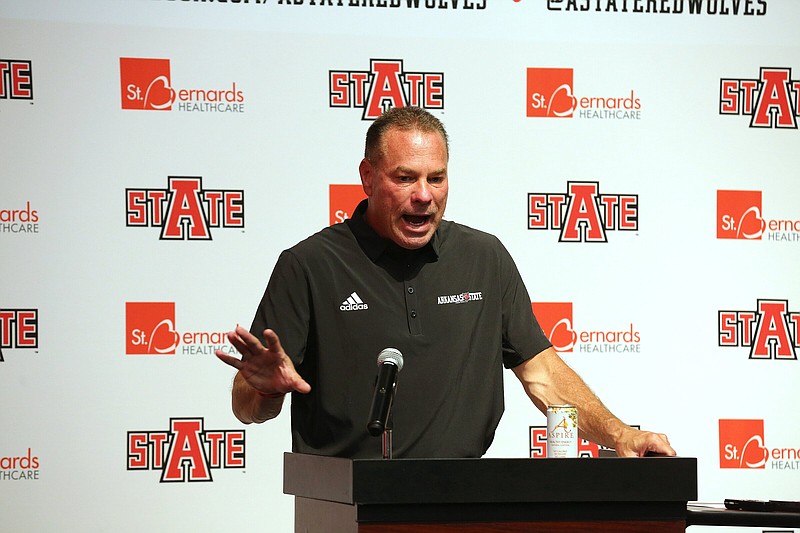 That's Arkansas State's conversion rate on third downs over its past three games against Louisiana-Lafayette, South Alabama and Massachusetts.

Third and fourth downs are the "critical plays" Coach Butch Jones so frequently speaks to, so he made sure to watch a cut-up of all 33 snaps prior to his Tuesday news conference.

It doesn't help that the Red Wolves have constantly put themselves in third-and-long scenarios.

Against the Ragin' Cajuns, 10 of the 11 third-down snaps came with at least 7 yards to gain. ASU fell behind the chains against the Jaguars and Minutemen similarly, with a combined 16 of 22 third-down plays requiring a gain of 7 or more.

Also, 17 of the 33 third-down attempts in the three-game span have been 10 or more yards from the line to gain, meaning the Red Wolves either didn't gain yards or went backward from where they started that set of downs.

The only two conversions in that stretch came on passes of 8 and 14 yards, both times facing third-and-four.

Not only do those scenarios require linemen to hold up for longer in order for plays to develop downfield, but third-and-long plays allow defensive fronts to pin their ears back and get after the quarterback. That, in turn, has forced ASU to bring in extra players to help protect James Blackman, and it prevents the Red Wolves from having more than two or three targets for their quarterback to find.

"You play the percentages game on third down," Jones explained. "If you're third-and-11 plus and you're [converting at] 25%, that's tops in the country -- you're going to be pretty good.

ASU's 30.9% conversion mark ranks 119th nationally, ahead of only Old Dominion in the Sun Belt Conference.

"We've got to have efficient plays on first and second down so we won't be in those third-and-unmanageable [spots]," Blackman said. "Third-and-medium, we've been converting those at a high percentage consistently."

Almost all of those in attendance last Saturday for ASU's 35-33 win against Massachusetts -- excluding perhaps those painting their chests in the front row of the Red Wolves' student section -- came to Centennial Bank Stadium bundled up.

The temperature in Jonesboro never got higher than 38 degrees and the wind gusted to more than 20 mph Saturday, making things feel like the temperature was below freezing.

"Some of [UMass'] coaches after the game said to me, 'Butch, you got us,' " ASU Coach Butch Jones said. " 'We stressed that we're from the Northeast and this is our type of weather, and we're going to the South and your players wouldn't be ready to play and all they'd worry about was the cold.' "

Jones also mentioned that sleeves can impede holding onto the ball, but more so stressed the mental element of things.

Although the weather is not expected to be as cold again Saturday when the Red Wolves visit Texas State, there is a chance for rain -- something ASU should be familiar with after its game against South Alabama three weeks ago.

Regardless, the Red Wolves were outside for practice Tuesday and again, nobody wore sleeves. One coach even wore shorts and others had just a t-shirt on top.

"It's a psychological disposition," Jones said. "It's a mindset."

For most of ASU's freshman class, the die is already cast on whether or not they'll be able to preserve a year of eligibility.

If a player appears in more than four games, he is not eligible to be granted a redshirt for that season.

Wide receiver Daverrick Jenkins and defensive end Keyron Crawford have taken regular snaps on their respective sides of the ball and both long passed the four-game threshold. The same goes for the likes of cornerback James Reed III, running back Mike Sharpe II, tight end Miller McCrumby and offensive lineman Chase Jessup and Elijah Zollicoffer -- some of whom are frequent players on special teams.

Linebacker Javante Mackey, defensive lineman Ashtin Rustemeyer and quarterback Jaxon Dailey are all currently at two games and safety Websley Etienne has only appeared once, so they'll all have four years of eligibility entering 2023.

Cornerback Ahmad Robinson and offensive lineman Aleric Watson are at four games apiece. Watson is likely to play this week, but Jones and his staff could opt to sit both players for the last two games if they want to keep their redshirts in play.