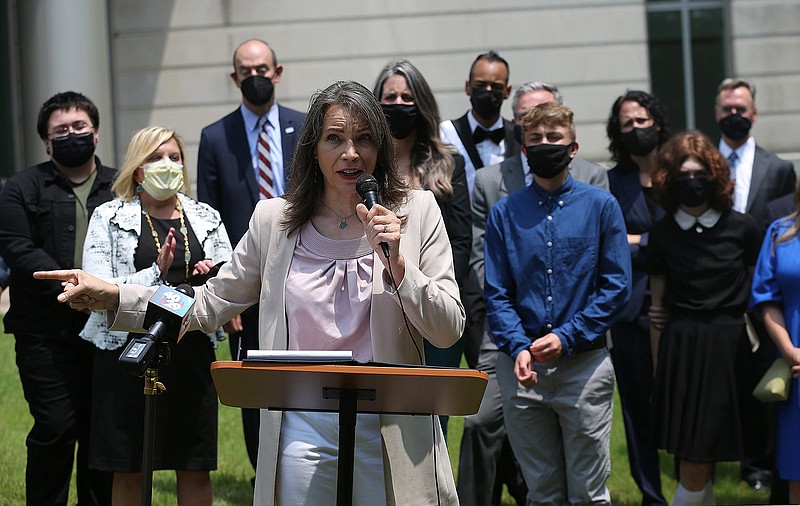 A federal appeals court issued a decision Wednesday denying the state's petition to reconsider a district court ruling temporarily blocking the state from enforcing a law passed in 2021 banning gender-affirming care for minors.

The Eighth U.S. Circuit Court of Appeals denied the state's petition requesting a hearing before the full court to reconsider a ruling by a three-judge panel of the Eighth Circuit which affirmed a temporary injunction granted last year by U.S. District Judge James M. Moody Jr. blocking implementation of the law. It also denied a request for a panel rehearing.

The ban, titled the Save Adolescents From Experimentation (SAFE) Act, was passed as Act 626 of 2021 last year by Republican lawmakers over a veto by Republican Gov. Asa Hutchinson, who said at the time that he opposed the law because it lacked any provision to grandfather in patients already receiving care.

Arkansas was the first state to enact such a ban, which has been opposed by a number of professional medical associations and business groups and has drawn sharp criticism from medical groups around the nation. The American Medical Association and the American Society of Pediatrics are two organizations that have opposed the law.

The law was challenged in a suit filed in April 2021 by the American Civil Liberties Union on behalf of four transgender teens and their families living in Arkansas and two physicians, Michele Hutchison and Kathryn Stambough. It named Arkansas Attorney General Leslie Rutledge, Arkansas State Medical Board Director Amy Embry and the 14 members of the medical board as defendants. The lawsuit contends the law violates the equal protection and due process clauses of the 14th Amendment and free speech protections under the First Amendment. In July 2021, just a week before the law was to go into effect, Moody issued a temporary injunction blocking it from being enforced while the matter is in court.

Last August, a three-judge panel of the Eighth Circuit upheld Moody's injunction, prompting Rutledge's request for a hearing before the full court.

Gender dysphoria is defined by the Mayo Clinic in Rochester, Minn., as the feeling of discomfort or distress that might occur in people whose gender identity differs from their sex at birth or sex-related physical characteristics.

The suit by the ACLU and ACLU of Arkansas contends the law violates the equal protection and due process clauses of the 14th Amendment and free speech protections under the First Amendment.

The trial began last month and is set to resume Nov. 28.

"Whatever the merits of the panel opinion," Colloton wrote in his opinion, "this case is not appropriate for rehearing en banc in its current procedural posture. The present appeal concerns a preliminary injunction entered in July 2021 as to which there has been no request for a stay by the State in fifteen months. The case is now in the midst of a trial in the district court that is scheduled to conclude in less than a month, on December 1, 2022."

Colloton wrote that once the case is decided in district court, "an appeal from the final judgment will present this court with a comprehensive record developed after more than ten months of discovery and a full trial, as opposed to the preliminary record that is before the court in the present appeal."

In his dissent, Stras wrote that with the the trial ongoing, the possibility exists that the issue could become moot before an appeal could be completed. Even so, he said, taking up the matter would be worth the risk considering an opinion by the full court will "frame the debate in the future, if not effectively decide any later appeal." Stras wrote that even if the case were never to come back to the Eighth Circuit, "we may be dealing with its far-reaching consequences for years to come."

A spokeswoman for Rutledge said in a statement that the denial by the Eighth Circuit was for procedural reasons and that "a majority of the court invited Arkansas to appeal again once the trial at a lower court is completed."

Amanda Priest said if the state does not prevail in the bench trial before Moody, it will appeal.

"Arkansans can rest assured that Attorney General Rutledge will continue to wholeheartedly defend the SAFE Act because it protects children from the experimental life-altering procedures," Priest said.

Holly Dickson, executive director of the ACLU of Arkansas, said in a prepared statement the ACLU will continue its opposition to the law "until every transgender youth in Arkansas knows they deserve safety, dignity, and respect."

Calling the law, "baseless and cruel," Dickson expressed gratitude to the court for allowing the lower court ruling to stand.

"Arkansas should be a safe place to raise all children -- transgender youth included -- and denying them life-saving health care does the exact opposite," Dickson said. "We are looking forward to completing our final trial on the merits and hopeful for a permanent injunction."