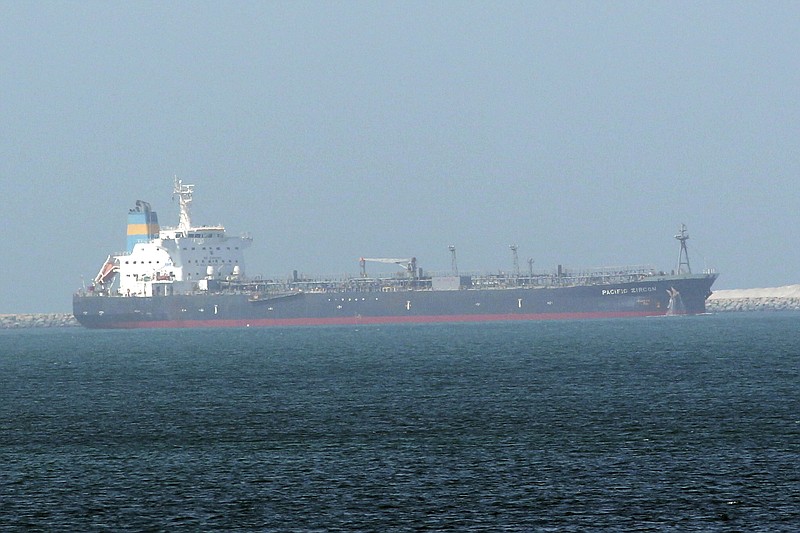 This undated photo made available by Nabeel Hashmi shows Liberian-flagged oil tanker Pacific Zircon, operated by Singapore-based Eastern Pacific Shipping in Jebel Ali port, in Dubai, United Arab Emirates, on Aug. 16, 2015. An oil tanker associated with an Israeli billionaire has been struck by a bomb-carrying drone off the coast of Oman amid heightened tensions with Iran. (AP Photo/Nabeel Hashmi)

DUBAI, United Arab Emirates -- An oil tanker associated with an Israeli billionaire has been struck by a bomb-carrying drone off the coast of Oman amid heightened tensions with Iran, officials said Wednesday. Meanwhile, Greece said Iran freed two Greek oil tankers held by Tehran since May.

The drone attack on the Liberian-flagged oil tanker Pacific Zircon happened Tuesday night off the coast of Oman, one Mideast-based defense official told The Associated Press. The official was not authorized to discuss the attack publicly and spoke on condition of anonymity.

The Pacific Zircon is operated by Singapore-based Eastern Pacific Shipping, which is a company ultimately owned by Israeli billionaire Idan Ofer.

In a statement, Eastern Pacific Shipping said the Pacific Zircon, carrying gas oil, had been "hit by a projectile" some 150 miles off the coast of Oman.

"We are in communication with the vessel, and there [are] no reports of injuries or pollution. All crew are safe and accounted for," the company said. "There is some minor damage to the vessel's hull but no spillage of cargo or water ingress."

An Israeli official, who spoke to the AP on condition of anonymity to discuss unpublicized details of the attack, said that it appeared Iran carried out the attack with a Shahed-136 exploding drone. Iran has supplied those drones to Russia, which has been using them to target infrastructure and civilian targets in Ukraine.

"It is an Iranian attack. [There] is a consensus on this in the Israeli intelligence and defense community," the official said.

Iran's government did not acknowledge the attack on the Pacific Zircon. Iran's mission to the United Nations did not immediately respond to a request for comment.

The strike came hours after the U.S. Navy announced it found 70 tons of a missile fuel component hidden among bags of fertilizer aboard a ship bound to Yemen from Iran, a major seizure potentially disrupting the Iranian-backed Houthis' ballistic missile program there.

Oil prices rose slightly as news of the attack spread, with benchmark Brent crude trading above $94 a barrel.

Later on Wednesday, Greek officials said two Greek oil tankers -- Delta Poseidon and Prudent Warrior -- had been freed, along with their sailors.

Tracking data from MarineTraffic.com showed the vessels sailing away from the Iranian port of Bandar Abbas where they had been held since May after being seized in a helicopter-born raid by Iran's paramilitary The Revolutionary Guard.

Their seizure came after Greece assisted the United States in attempting to seize oil days earlier from the Iranian-flagged tanker Lana to enforce American sanctions.

"Today is a very pleasant day for our sailors, but also for Greece in general, since an unpleasant and particularly complex case came to an end following systematic efforts by the Greek government," Greek Shipping Minister Giannis Plakiotakis said in a statement.

While no one immediately claimed responsibility for the attack off the coast of Oman, suspicion immediately fell on Iran. Tehran and Israel have been engaged in a yearslong shadow war in the wider Middle East, with some drone attacks targeting Israeli-associated vessels traveling around the region.

The U.S. also blamed Iran for a series of attacks occurring off the coast of the United Arab Emirates in 2019. Tehran at the time had begun escalating its nuclear program following the unilateral U.S. withdraw from Iran's atomic deal with world powers.

Information for this article was contributed by Tia Goldenberg, Ilan Ben Zion and Elena Becatoros of The Associated Press.