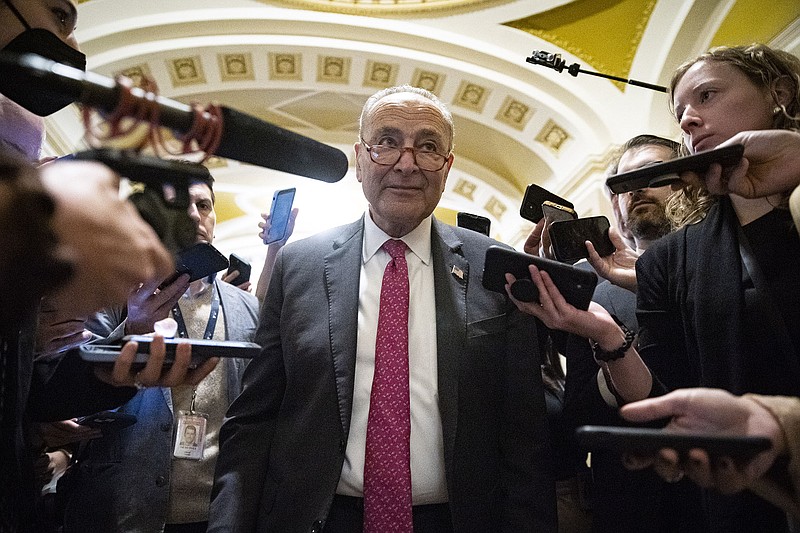 “It will make our country a better, fairer place to live,” Senate Majority Leader Charles Schumer said after Wednesday’s vote on marriage protections, noting that his own daughter and her wife are expecting a baby next year. (The New York Times/Al Drago)

WASHINGTON -- Legislation to protect same-sex and interracial marriages crossed a major Senate hurdle Wednesday, putting Congress on track to take the historic step of ensuring that such unions are enshrined in federal law.

Twelve Republicans voted with all Democrats to move forward on the legislation 62-37, meaning a final vote could come as soon as this week, or later this month. Senate Majority Leader Charles Schumer said the bill ensuring the unions are legally recognized under the law is chance for the Senate to "live up to its highest ideals" and protect marriage equality for all people.

"It will make our country a better, fairer place to live," Schumer said, noting that his own daughter and her wife are expecting a baby next year.

Senate Democrats are quickly moving to pass the bill while the party still controls the House. Republicans won the House majority Wednesday and are unlikely to take up the issue next year.

In a statement after the vote, President Joe Biden said that he would sign the bill once it is passed.

"Love is love, and Americans should have the right to marry the person they love," Biden said.

The bill has gained steady momentum since the Supreme Court's June decision that overturned Roe v. Wade and the federal right to an abortion. An opinion at that time from Justice Clarence Thomas suggested that an earlier high court decision protecting same-sex marriage could also come under threat.

The bill would also repeal the 1996 Defense of Marriage Act, which defined marriage as the union of one man and one woman and allowed states to decline to recognize same-sex marriages performed in other states. That law has remained on the books despite being declared unconstitutional by the Supreme Court's ruling in Obergefell v. Hodges. The new Respect for Marriage Act would also protect interracial marriages by requiring states to recognize legal marriages regardless of "sex, race, ethnicity, or national origin."

In his June concurrence with the decision to overturn Roe v. Wade, Thomas wrote that the high court should also examine previous rulings that legalized the right of married couples to buy and use contraception without government restriction (Griswold v. Connecticut), same-sex relationships (Lawrence v. Texas) and marriage equality (Obergefell v. Hodges).

"After overruling these demonstrably erroneous decisions, the question would remain whether other constitutional provisions guarantee the myriad rights that our substantive due process cases have generated," he added.

Congress has been moving to protect same-sex marriage as support from the general public -- and from Republicans in particular -- has sharply grown in recent years, as the Supreme Court's 2015 Obergefell v. Hodges decision legalized gay marriage nationwide. Recent polling has found more than two-thirds of the public supports same-sex unions.

Still, many Republicans in Congress have been reluctant to support the legislation, with many saying it was unnecessary while the marriages are still protected by the courts. Democrats delayed consideration until after the midterm elections, hoping that would relieve political pressure on some GOP senators who might be wavering.

A proposed amendment to the bill, negotiated by supporters to bring more Republicans on board, would clarify that it does not affect rights of private individuals or businesses that are already enshrined in law. Another tweak would make clear that a marriage is between two people, an effort to ward off some far-right criticism that the legislation could endorse polygamy.

The amendment clarifies that the bill does not authorize the federal government to recognize polygamous marriages and confirms that nonprofit religious organizations would not be required to provide "any services, facilities, or goods for the solemnization or celebration of a marriage."

Three Republicans said early on that they would support the legislation and have lobbied their GOP colleagues to support it: Maine Sen. Susan Collins, North Carolina Sen. Thom Tillis and Ohio Sen. Rob Portman. They argued that there was still value in enshrining the rights for such marriages even if the courts don't invalidate them.

"Current federal law doesn't reflect the will or beliefs of the American people," Portman said ahead of the vote. "It's time for the Senate to settle the issue."

In the end, nine of their GOP colleagues joined them in voting for it, bringing the total to twelve and providing enough votes needed to overcome a filibuster in the 50-50 Senate. The other Republicans who voted for the legislation were Sens. Richard Burr of North Carolina, Todd Young of Indiana, Shelley Moore Capito of West Virginia, Mitt Romney of Utah, Joni Ernst of Iowa, Roy Blunt of Missouri, Cynthia Lummis of Wyoming and Lisa Murkowski and Dan Sullivan of Alaska.

The growing GOP support for the issue is a sharp contrast from even a decade ago, when many Republicans vocally opposed same-sex marriages. The legislation passed the House in a July vote with the support of 47 Republicans -- a larger-than-expected number that gave the measure a boost in the Senate.

On Tuesday, The Church of Jesus Christ of Latter-day Saints became the most recent conservative-leaning group to back the legislation. In a statement, the Utah-based faith said church doctrine would continue to consider same-sex relationships to be against God's commandments, but it would support rights for same-sex couples as long as they didn't infringe upon religious groups' right to believe as they choose.

Wisconsin Sen. Tammy Baldwin, a Democrat who is the first openly gay senator and has been working on gay-rights issues for almost four decades, said the newfound openness from many Republicans on the subject reminds her "of the arc of the LBGTQ movement to begin with, in the early days when people weren't out and people knew gay people by myths and stereotypes."

Baldwin said that as more individuals and families have become visible, hearts and minds have changed.

"And slowly laws have followed," she said. "It is history."

Schumer said the issue is personal to him, as well.

"Passing the Respect for Marriage Act is as personal as it gets for many senators and their staffs, myself included," Schumer said. "My daughter and her wife are actually expecting a little baby in February. So it matters a lot to so many of us to get this done."

Collins added that even without an imminent threat, "there is still value in ensuring that our federal laws reflect that same-sex and interracial couples have the right to have their marriages recognized, regardless of where they live in this country."

The successful vote Wednesday marked an improbable outcome for a measure that had once been regarded as a mere messaging bill that had little chance of enactment given Republican opposition.

Democrats initially took up the measure as an election-year maneuver to show voters that they were doing everything possible to protect same-sex marriage rights in the face of new threats from a conservative Supreme Court.

Instead, it passed in the House in July with 47 Republicans joining Democrats in favor, and a bipartisan group in the Senate began talks on a version that could draw enough Republican backing in that chamber to move forward.

"They're important religious liberty protections that have been negotiated in, and that's why I supported it," Romney told reporters Wednesday.

Senate negotiators agreed to add language ensuring that churches, universities and other nonprofit religious organizations could not lose tax-exempt status or other benefits for refusing to recognize same-sex marriages and could not be required to provide services for the celebration of any marriage. They also added language to make clear that the bill does not require or authorize the federal government to recognize polygamous marriages.

Information for this article was contributed by Mary Clare Jalonick and Sam Metz of The Associated Press, Amy B Wang and Liz Goodwin of The Washington Post and by Annie Karni of The New York Times. 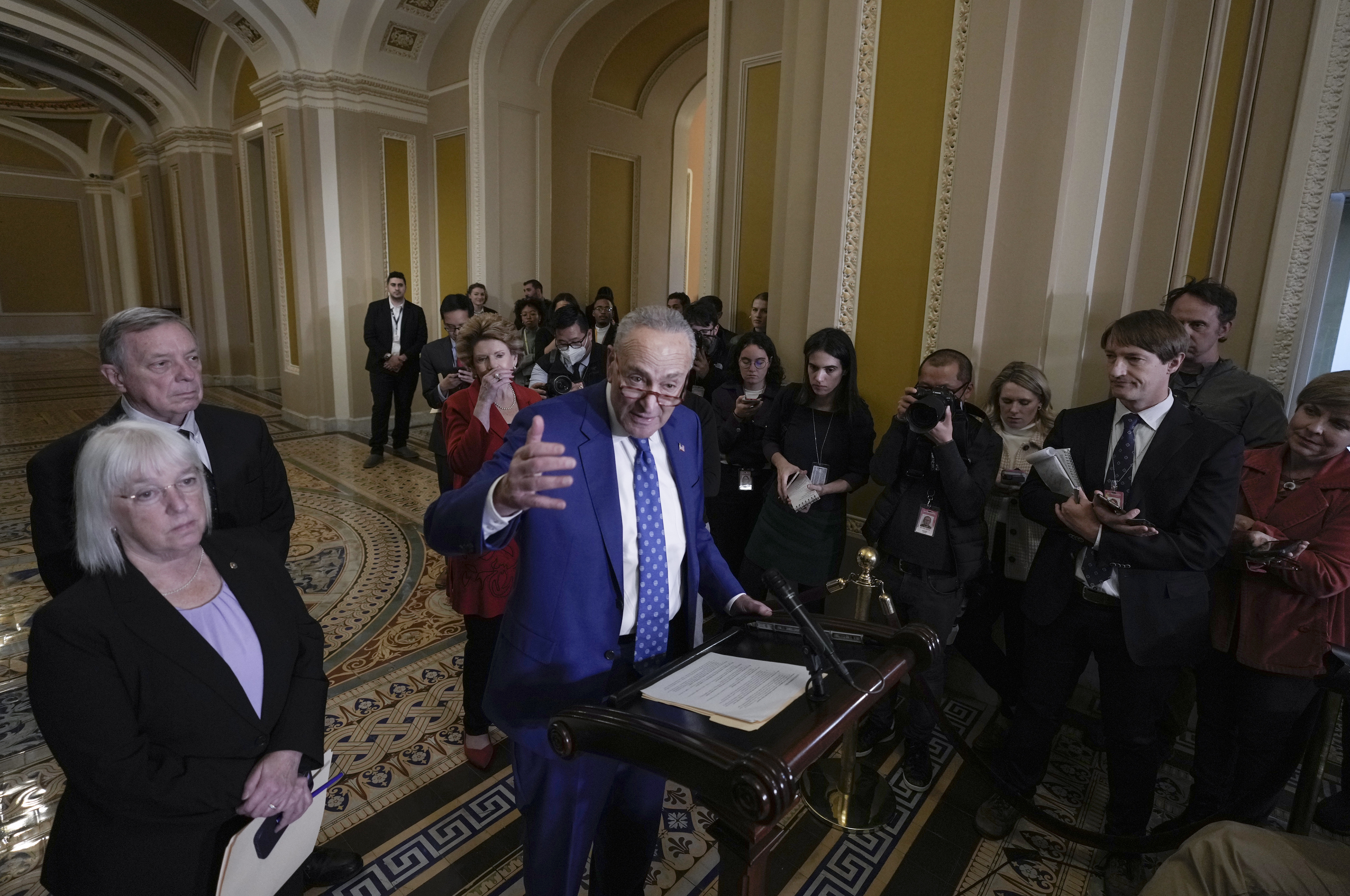 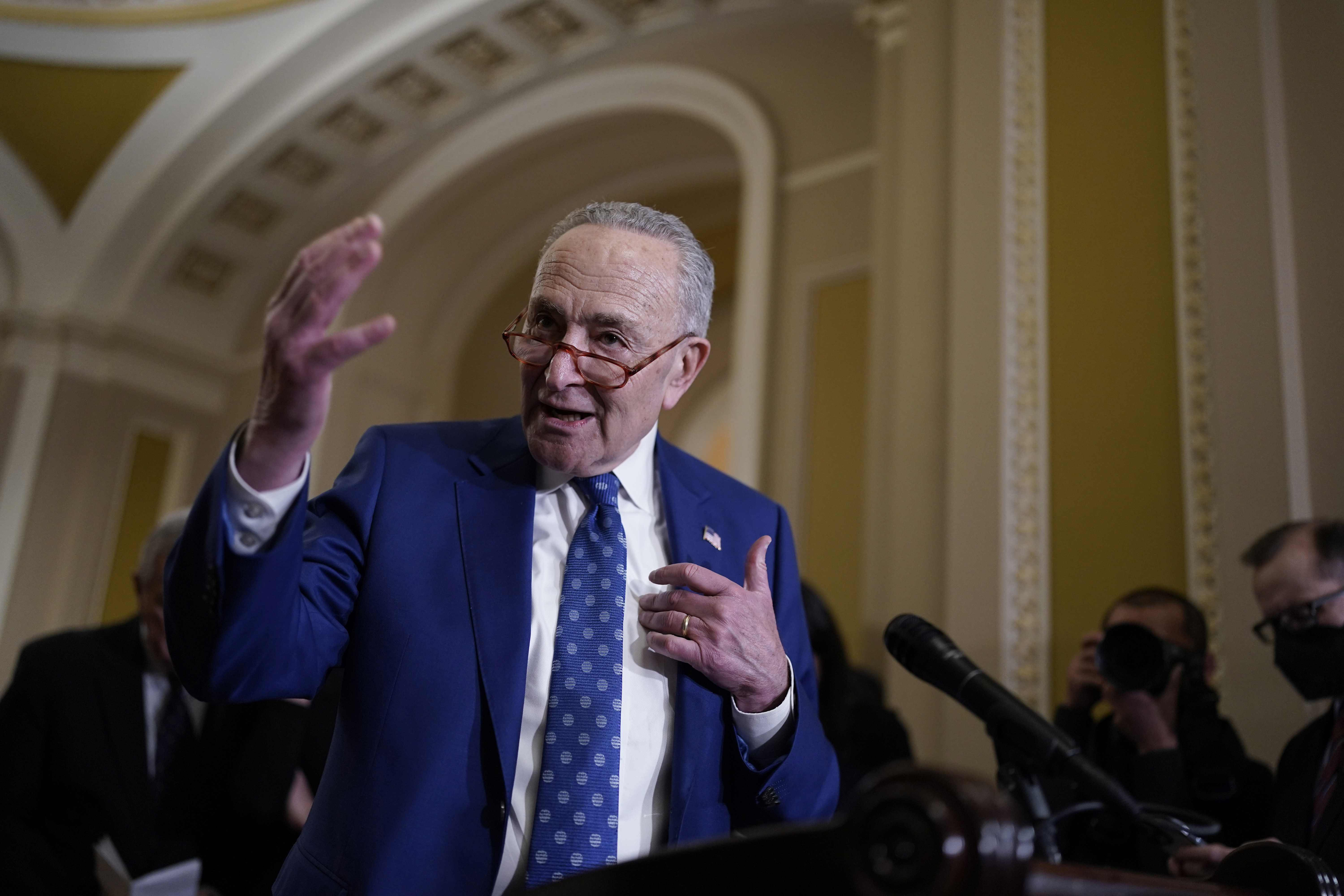