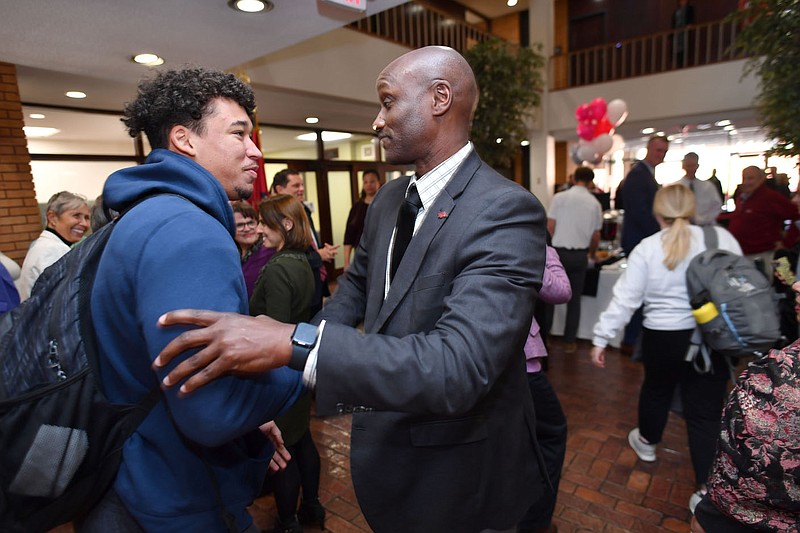 Charles Robinson is congratulated by associates Wednesday, Nov. 16, 2022, after being hired as the chancellor of the University of Arkansas during an impromptu reception at the university√çs administration building on the campus in Fayetteville. Visit nwaonline.com/221117Daily/ for today's photo gallery. (NWA Democrat-Gazette/Andy Shupe)

MONTICELLO -- Trustees finally concluded an extended search for the next University of Arkansas, Fayetteville chancellor Wednesday, and he's a candidate with whom they're very familiar: interim Chancellor Charles Robinson, who has worked at the university for more than two decades and is the first Black person to serve as chancellor.

C.C. "Cliff" Gibson III, chairman of the Board of Trustees of the University of Arkansas, made the motion to select and appoint Robinson, 56, as the next chancellor, and offer him a three-year contract with the same "terms, benefits, and conditions" as previous Chancellor Joe Steinmetz -- who earned a salary of $464,000, plus yearly deferred compensation of $250,000 -- with exact language and details to be drawn up by JoAnn Maxey, general counsel for the UA System.

This is "a historic moment for our flagship university and the state," Gibson said. "The board has seized the opportunity to select a very accomplished man who happens to be Black [and demonstrate] that the Arkansas of today is not the Arkansas of 1957."

"I could not be more proud of the board's [role] in this historic moment, [but] let me disabuse anyone of the notion that" Robinson's selection was any form of "affirmative action," he added. Robinson has "worked his way to the top of the university" over his two-plus decades in Fayetteville, and "he has earned this."

Robinson said his selection as chancellor "shows the value of hard work, listening, and making personal connections. The campus feels connected to me, and I absolutely feel connected to it."

Robinson and the University of Utah's Daniel A. Reed were the two leading candidates; Jay T. Akridge (provost and executive vice president for academic affairs at Purdue University) and Cynthia Y. Young (founding dean of the College of Sciences at Clemson University and who would have potentially been UA-Fayetteville's first female chancellor if she had been selected) were the other two finalists.

All four finalists spent two days of meetings with students, faculty, staff and university stakeholders in Fayetteville, but the field narrowed to Robinson and Reed.

The board held a three-hour executive session Sept. 30 and met again for two hours on Oct. 14, but reached no consensus on who should be the university's next chancellor, so -- earlier this month -- Gibson called a special trustees meeting for Friday for a public vote on the chancellor, noting "this [process] has gone on long enough." That meeting is no longer necessary after Wednesday's vote.

Voting for Robinson "is the most important vote I've ever cast as a board member, [and we have] a great chancellor," said trustee Sheffield Nelson. "[We] took a major step forward" today.

It is "a big deal," added trustee Ted Dickey.

Gov. Asa Hutchinson offered his congratulations to Robinson, calling it a "historic appointment" in a statement issued by his office.

"His leadership at the University over the past 20-plus years has prepared him for the challenges and opportunities of leading this institution. I wish him well as he steps into his new role to prepare Arkansas students for the future."

Robinson "will be -- and is -- a fine chancellor," said Col. Nate Todd, another UA trustee. "I am a proud Arkansan, [and] we have great leadership throughout our university system, starting with our president, Donald Bobbitt."

Robinson chose to remain in contention for the chancellor's position, rather than accept a return to a provost role -- albeit at a salary higher than he currently earns as interim chancellor, and with different and enhanced duties from his previous stint as provost -- when offered a different role by Bobbitt, who favored Reed over Robinson for the chancellor's job, according to an email from Robinson to Bobbitt. The email was first reported by the Arkansas Times.

In Robinson's email to Bobbitt, Robinson wrote that returning to a provost position "would not be the right professional pathway for me," and "it is my hope that the board will support my candidacy."

The finalists for the chancellor position were "extraordinary, and there was a difference of opinion on what the campus needed," Bobbitt said Wednesday. "I believe [Reed] could have done an excellent job, too, but the board made their choice, and it's fine with me."

Though typically the system president makes a recommendation of a chancellor for board approval, that board policy was waived as part of Gibson's motion, which was approved by all the trustees.

Several notable state figures and individuals and entities at the university submitted letters of support for Robinson to the trustees and/or Bobbitt.

They included Matthew J. Shepherd, Republican speaker of the Arkansas House of Representatives and the Arkansas State Representative for District 6; William Dillard II, chairman and CEO of Dillard's Inc.; Johnelle Hunt, co-founder of J.B. Hunt Transport Services with her late husband Johnnie Bryan Hunt; businessman Ben Hyneman, an alumnus of UA-Fayetteville and a former UA System trustee; Dr. Stephen Broughton and Mark Waldrip, both former chairmen of the UA System board of trustees; Leslie Yingling, assistant vice chancellor and associate Dean of Students at UA-Fayetteville, who was taught by Robinson as a student; the National Pan-Hellenic Council -- a collaborative umbrella council composed of historically African American fraternities and sororities --at UA-Fayetteville; and UA-Fayetteville's Interfraternity Council.

"I have the support of campus constituents and many external constituents, which I'm humbled by and very appreciative of," Robinson said. "It says something that a person like me can get their" attention, and that they took the time to recommend him to those tasked with making the chancellor decision, he added.

Dr. Terry Burns, who grew up with Reed in rural northern Arkansas, sent a letter of support for Reed, and Reed was publicly endorsed by Steuart Walton, grandson of the late Sam Walton -- the university's business school is named after the Walmart founder -- who wrote an op-ed piece in the Arkansas Democrat-Gazette earlier this month citing Reed's ability to lift the university's research endeavors to greater heights. Walton is co-founder of Runway Group, a holding company that invests in real estate, hospitality, and other businesses in Northwest Arkansas.

Bobbitt said Wednesday he was dismayed by the public campaigning "by those on the outside" for various chancellor candidates, as these individuals "inserted themselves into the board's business."

As interim chancellor, Robinson didn't want to be a mere placeholder, he explained earlier this fall. "To be an effective interim, you have to have a plan and do something, because if you don't do anything, you're just getting in the way."

Now that "this is behind me," he can plan even longer term, and "we have a lot of work to do to make this institution better," he said Wednesday. "We can't rest on our laurels."

Under Robinson, the university set a record for enrollment -- crossing the 30,000 milestone for the first time this fall -- and a record enrollment of Arkansans (15,479), based on September's head count.

Part of expanding enrollment is controlling costs, and in-state tuition and fees remained essentially flat -- an increase of less than 1% -- this year, he said. Additionally, the university has expanded scholarships to Arkansans by $1 million, and university employees received a 5% wage increase this year -- 3% on the base and a 2% bonus.

"We have to create more access for Arkansans, [as per] our land-grant mission, and help students succeed," Robinson said Wednesday. "Improving in every aspect of what we do, that will be an indicator of success for me" as chancellor.

Before being named interim chancellor in August 2021 after acting Chancellor Bill Kincaid -- who was named to that role after Steinmetz officially resigned June 18, 2021 -- returned to his role on campus as senior managing associate general counsel, Robinson was provost and executive vice chancellor for academic and student affairs at the university.

"When someone needed to take over [as interim chancellor], we knew [Robinson] was qualified and capable, and he did not disappoint," Gibson said. "He has earned the right to be considered for chancellor through hard work, integrity and honesty in all his dealings."

Robinson began his career at UA-Fayetteville in 1999 as an assistant professor of history, and during his time as vice chancellor for student affairs, Robinson led a major restructuring of the Division of Student Affairs, positioning it to focus more on student success initiatives, according to the UA System.

He also led institutional efforts regarding diversity recruitment and retention of students and faculty while developing new academic initiatives and development goals.

"I've worked with [Robinson] for a long time, and I hired him for his first administrative position," Bobbitt said. He's an "inspirational leader," and "I look forward to working with him to continue advancement" of the university.

Under his leadership, the university constructed Adohi Hall, a $79 million campus project that is the only residence hall in the United States to use cross-laminated timber, according to the UA System. His research and teaching focuses on Southern history and race relations, African American studies, sexuality in history and civil rights, among other topics, and he's earned a number of awards for his teaching, including the Fulbright College Master Teacher Award, Arkansas Student Alumni Board Teacher of the Year and an induction into the university's Teaching Academy.

Reed, an Arkansas native who still has relatives living in the state, earned a bachelor's degree in computer science at Missouri University of Science and Technology and a master's and Ph.D. in computer science at Purdue University in Indiana. He was the corporate vice president for technology policy and extreme computing for Microsoft, where he focused extensively on cloud computing technology, but the preponderance of his career has been spent in academia, and he is the presidential professor of computational science at the University of Utah.

At Utah, Reed helped launch the For Utah scholarship -- which diversified the student body and broadened access for first-generation students -- and spearheaded the 1U4U cross-campus research initiative, according to the UA System. Previously, Reed was the university chair in computational science and bioinformatics and professor of computer science, electrical and computer engineering and medicine at the University of Iowa, where he was vice president for research and economic development.

Reed was the founding director of the Renaissance Computing Institute at the University of North Carolina at Chapel Hill, with joint faculty appointments at Duke and North Carolina State University, and he also served as the chancellor's eminent professor and vice chancellor for information technology in Chapel Hill, according to the UA System. Before that, he was head of the Department of Computer Science at the University of Illinois at Urbana-Champaign as well as director of the National Center for Supercomputing Applications. 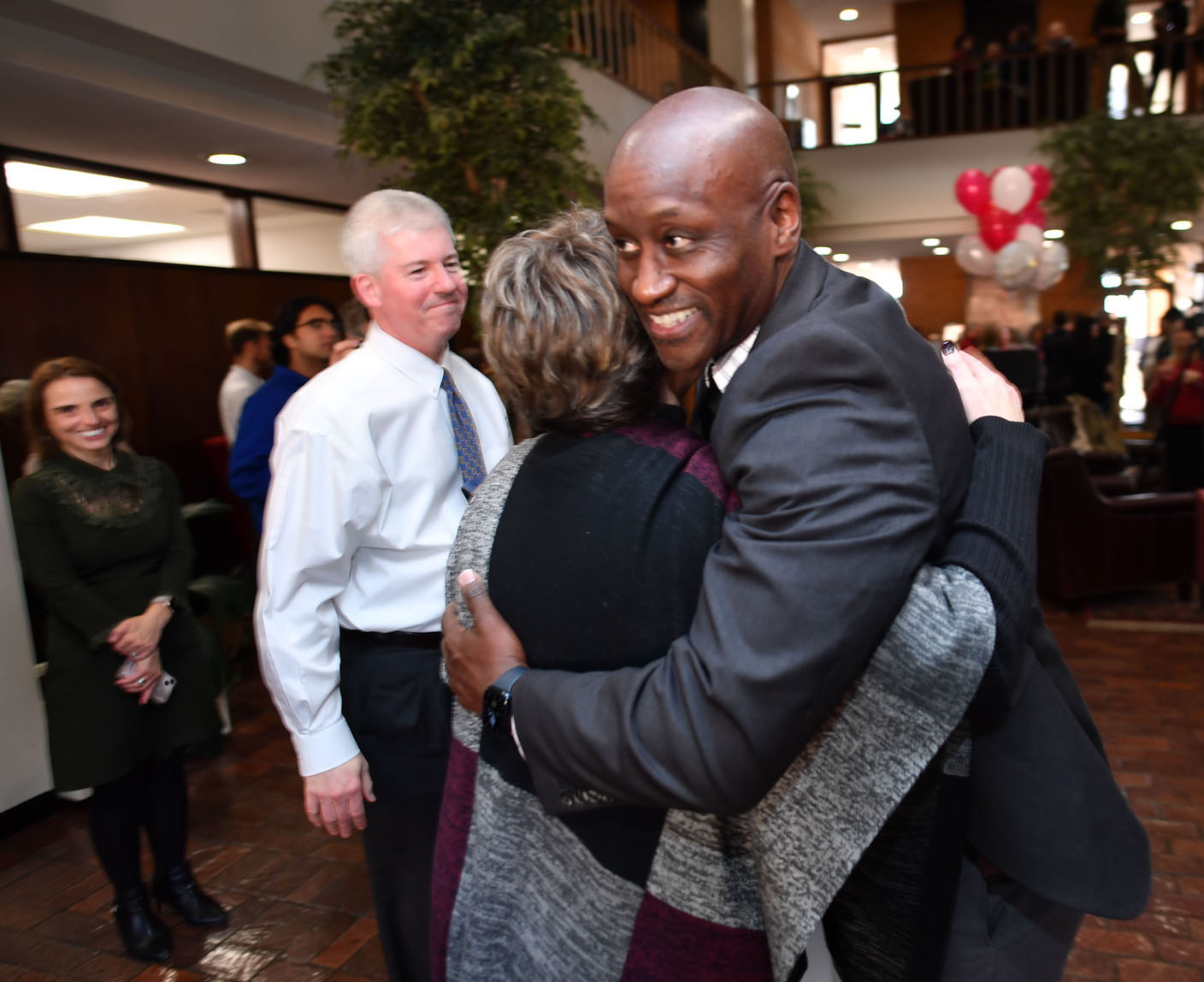 Charles Robinson is congratulated by associates Wednesday, Nov. 16, 2022, after being hired as the chancellor of the University of Arkansas during an impromptu reception at the university√çs administration building on the campus in Fayetteville. Visit nwaonline.com/221117Daily/ for today's photo gallery. (NWA Democrat-Gazette/Andy Shupe) 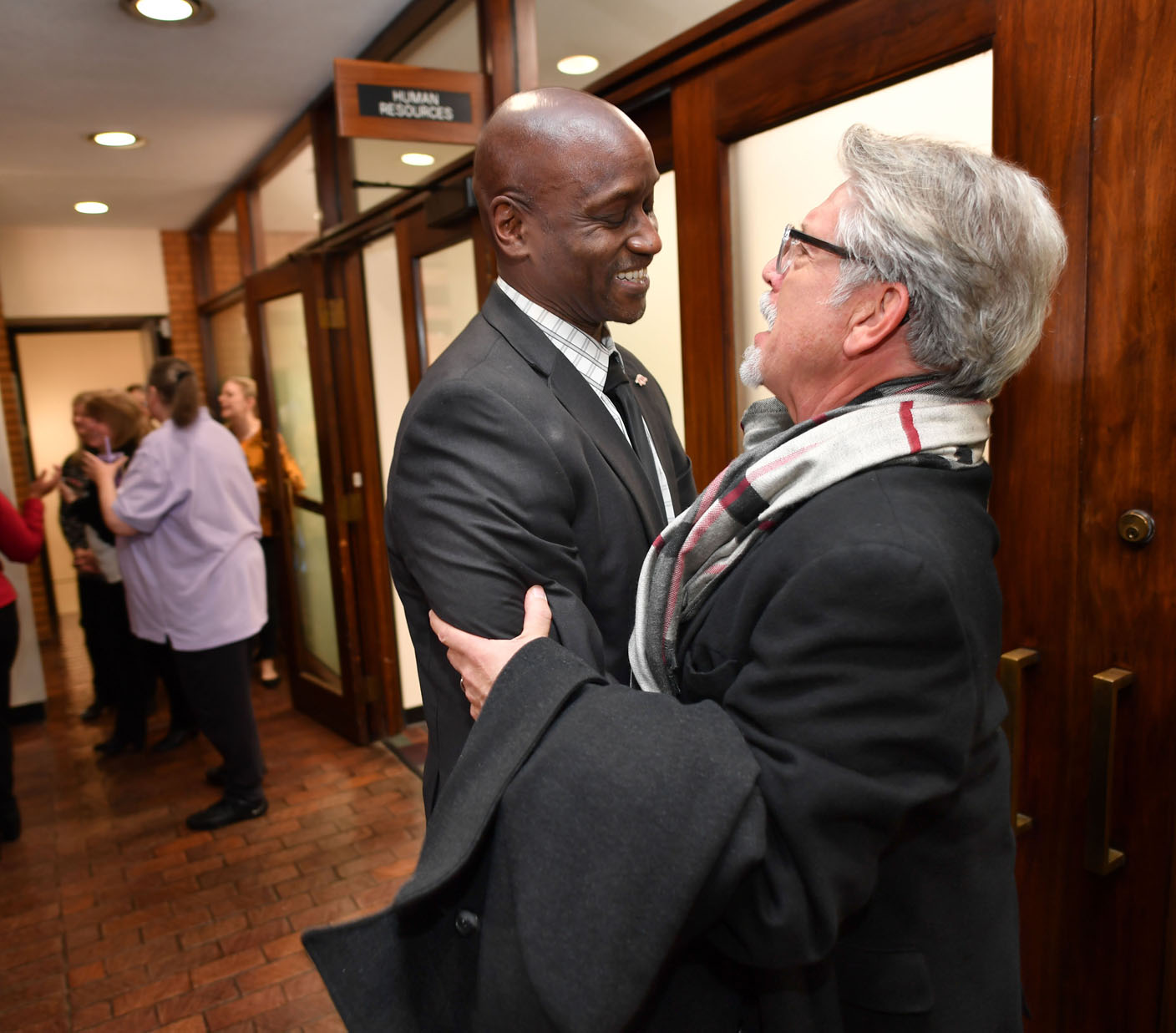 Charles Robinson (center) is greeted Wednesday, Nov. 16, 2022, by Curt Rom, dean of the graduate school and international education at the University of Arkansas, after being hired as the chancellor of the University of Arkansas during an impromptu reception at the university√çs administration building on the campus in Fayetteville. Visit nwaonline.com/221117Daily/ for today's photo gallery. (NWA Democrat-Gazette/Andy Shupe) 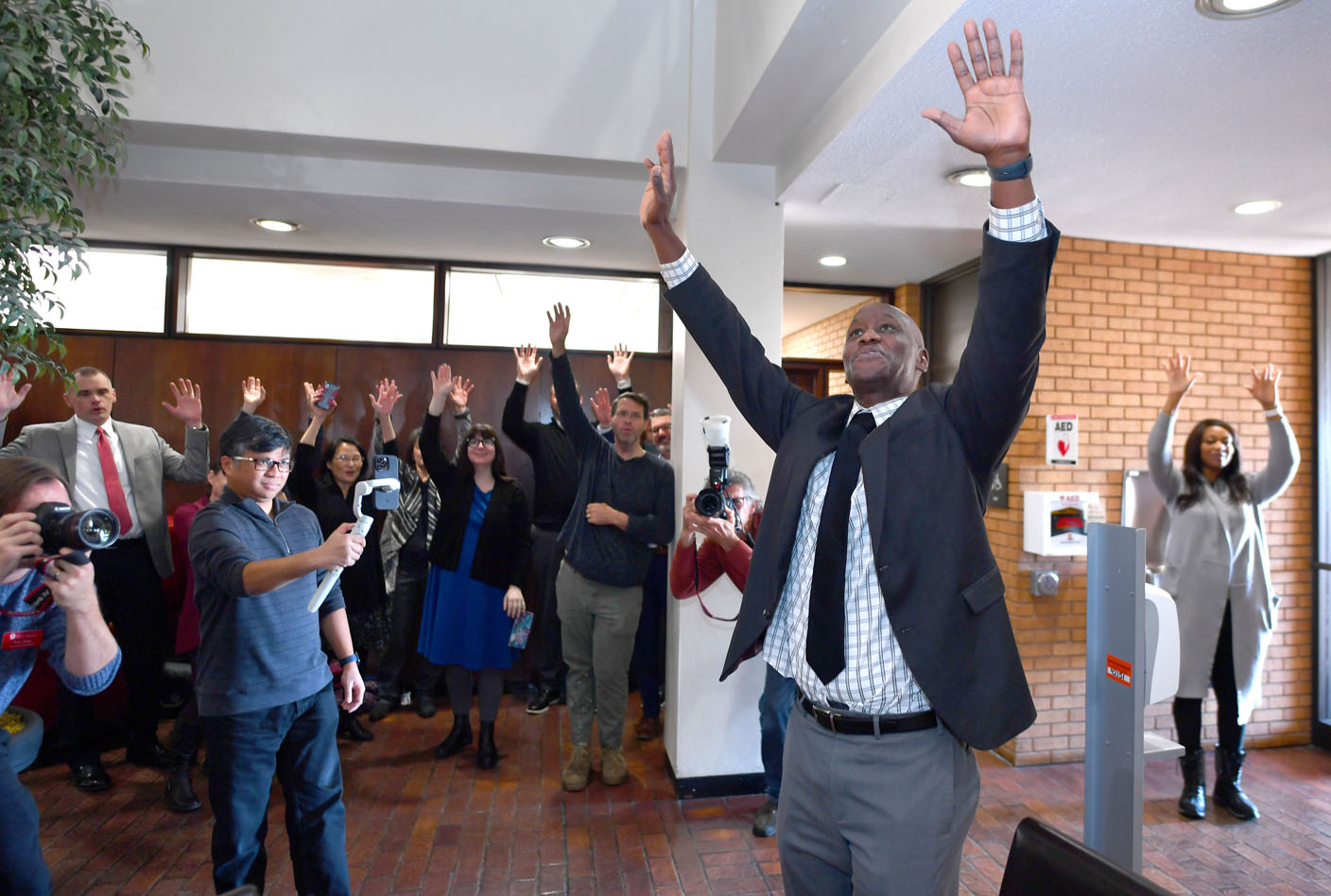 Charles Robinson calls the Hogs Wednesday, Nov. 16, 2022, after being hired as the chancellor of the University of Arkansas during an impromptu reception at the university√çs administration building on the campus in Fayetteville. Visit nwaonline.com/221117Daily/ for today's photo gallery. (NWA Democrat-Gazette/Andy Shupe)

Print Headline: Robinson gets nod to be next UA chancellor