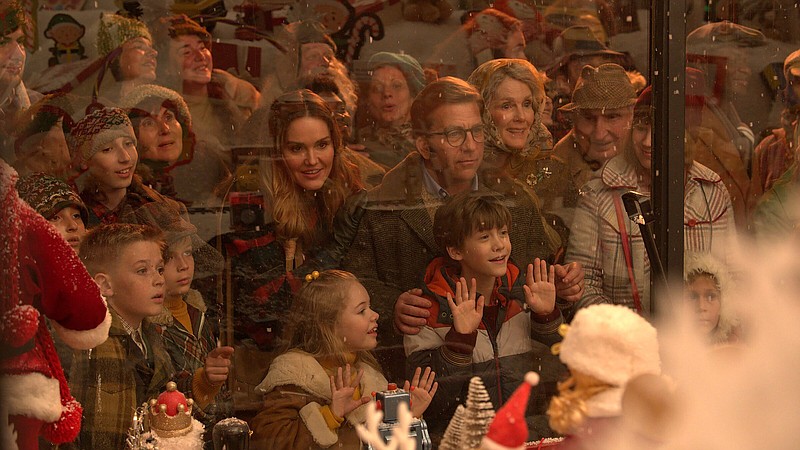 If any movie had a tall order this year, it was "A Christmas Story Christmas." This is a sequel to a movie so many Gen Xers and Millennials consider a holiday classic, if not the holiday classic.

TNT has run "A Christmas Story" marathons for years. And just about everyone I know can quote something from the film, whether it's "Fraj-ee-lay" or "You'll shoot your eye out." The movie is a wacky holiday treasure that has stood the test of time. So how do you even begin to make a proper sequel to it?

Hollywood has tried in the past with "My Summer Story" in 1994 and "A Christmas Story 2" in 2012. Neither hit the same level of recognition or success as the original. But now HBO Max has taken a swing, and I'm happy to say they did surprisingly well.

"A Christmas Story" is one of those holiday films that carries so much nostalgia, almost a nuclear bomb's worth of the stuff. So advancing the story without detonating any of that nostalgia seemed like an impossible task.

When I first saw the trailer "A Christmas Story Christmas," I kind of dreaded it. I thought the film would just be a lazy rehash with most of the same lines. Hollywood churns out so many sequels and reboots where the characters only exist to point at a piece of nostalgia from the original and say, "Remember this?"

Thankfully, this sequel sidestepped that land mine and did something smart. Instead of aiming its nostalgia at the audience, "A Christmas Story Christmas" aimed it at the main character. We got to see those things from the first movie through the narrator's eyes as he remembered the infamous lamp and the BB gun, and they became nostalgic for him. It's actually a clever maneuver that ended up making this an enjoyable holiday film.

"A Christmas Story Christmas" did something else right, too. It brought back Peter Billingsley as the narrator and main character, Ralphie. And he carries so much of this film, from the emotional moments to the silly scenes. He is the best part of the movie.

The story follows Ralphie as an adult in the '80s, now living in Chicago with his wife, Sandy (Erinn Hayes), and two kids. It's almost Christmas time, and Ralphie is waiting for his mother and father to visit his family in the city, as they have for several years now.

And it seems the clock is ticking down on Ralphie's dream to become a published writer. He's got some godawful science fiction novel that's 2,000 pages long. The would-be author gave himself one year to try writing full time, and if he didn't get a publishing contract, he'd go back to a regular job. Well, the year is almost over, and almost every publisher has told him "no."

That's when he gets even worse news in the form of a phone call from his mother, Mrs. Parker (Julie Hagerty). She reveals that Ralphie's father has died. And while Billingsley was able to return for the role of Ralphie, his father in "A Christmas Story" was played by Darren McGavin, who died in 2006. (Arkansan Melinda Dillon played Ralphie's mother in the original film but did not return for this sequel. She is now 83.)

Fortunately, Hagerty gives a solid performance as Mrs. Parker. Though it would have been great to see Dillon return. But you know who does return? Scott Schwartz as Flick, the kid who got his tongue stuck to the flagpole in the original. Then there's also R.D. Robb, who returns as Schwartz, the kid who triple-dog-dared Flick to stick his tongue to the flagpole in the first place. Both are welcome additions who pick right up as Ralphie's childhood friends upon his return to Hammond, Ind.

When Ralphie returns to his childhood home, there's a sweet moment of him looking at photos of his father, and audio from the original film plays, lines from the Old Man. This is the nostalgia we see Ralphie experience, and it's a great portrait of a newly grieving man.

It isn't long before the main challenge of the movie is brought to Ralphie, again in the form of his mother, who asks that he plan the perfect Christmas for his family. Of course, he gives his word, and only then does he realize how difficult it is to pull off the perfect Christmas. He sees, at once, how easy his Old Man made it look when he was growing up.

And this is where "A Christmas Story Christmas" makes it clear to the audience that screenwriters Nick Schenk and Clay Kaytis understood the assignment all too well. The strength of the original film is that it's a very loosely connected narrative thread that follows all these wacky pit stops. The film moves quickly from one hilarious situation to another, throwing in a few daydreams from Ralphie along the way.

"A Christmas Story Christmas" uses this same formula to give the audience what it wants, but from a new perspective. Now Ralphie is the Old Man (and dealing with the loss of his own father). There's no shortage of silly moments, from customers going dead silent at the bar each time the phone rings because a wife is looking for her husband, to a snowball fight where Ralphie shoots his daughter's eye out.

I was surprised at just how much this movie made me laugh, but there are just so many gags and goofy moments to appreciate.

Then, just when you think it's all fun and games, Ralphie and his mother get a moment to reflect on the loss of the Old Man. It delivers just the right amount of sentimentality for a holiday movie.

My only real gripe with "A Christmas Story Christmas" comes at the end when the screenwriters demonstrate they don't understand how newspapers work. Or column syndication for that matter. But this is a small nitpick compared to the disappointing review I thought I'd be writing when I first saw the trailer.

Kaytis (who also directed) knew exactly what audiences would want in a follow-up to a beloved 39-year-old Christmas film. He stuck the landing, thanks mostly to avoiding common pitfalls and Billingsley's heavy lifting.

"A Christmas Story Christmas" is available now on HBO Max.