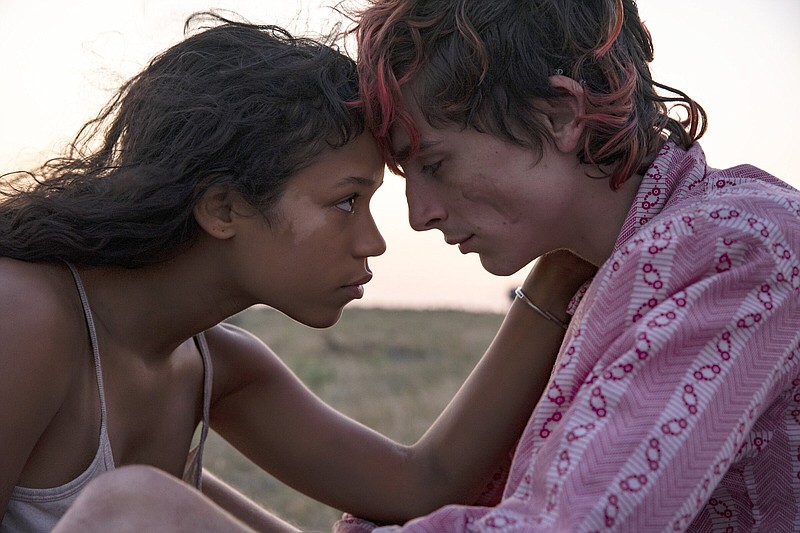 Dine and dash: Maren (Taylor Russell) and Lee (Timothee Chalamet) are cannablistic young lovers out to see America in the Reagan era in Luca Guadagnino’s horror romance “Bones and All.”

But for the intrigued, the twisted and the Chalamet faithful, I present to you "Bones and All," the latest film from Italian auteur Luca Guadagnino. "Bones and All" is a genre fusion that starts incredibly strong, but meanders a bit in the middle before coming unglued in the final 15 minutes. It's an undeniably enigmatic movie that occasionally plays like cheap YA love story. Other times it resembles a poor man's "Badlands." At one point the words "Natural Born Cannibals" came to mind (and not necessarily in a good way).

Those things may weigh it down a bit, but "Bones and All" also has some really big strengths. And when Guadagnino is hitting his marks, you can't help but be pulled into the morally murky muck of his grisly yet at times unexpectedly endearing story. There are scenes where the movie seems to be at odds with itself. Yet it's fascinating to watch as Guadagnino somehow successfully juggles the sweet, the gruesome and the trashy. He also shrewdly pieces together a couple of the most unsettling sequences of the year -- ones energized by two brief but absolutely chilling supporting turns.

"Bones and All" tries to be a road trip movie, a romance, a horror film, and a coming-of-age drama. Not all of the different genre pieces snugly fit, yet there's still much to admire, and Guadagnino isn't the kind of filmmaker who simply rehashes things we've seen before. That said, I kept wondering to myself, what's the point? I'm now several days removed from the film, and I'm still not sure. It's not romantic enough to say much about love. Outside of the two mentioned scenes, it's not scary enough to move the horror needle. And our main characters are too withdrawn to convey much about humanity. Yes, there are some readings that range from pointlessly vague to on-the-nose. But none that packs a real punch.

Yet there's still an undeniable draw to what Guadagnino is doing, and it feels original despite noticeably pulling from several influences. And even when it starts to wander in the second half, there are enough little surprises along the way to keep the film afloat. It's also helped by its lead, Taylor Russell, who's fresh off winning the Marcello Mastroianni Award at Venice (given to the Best Performance by an Emerging Actor or Actress). Russell blends nicely into Guadagnino's canvas, and her quiet earnest presence fits well with the film's mellow pacing.

Set in the late '80s, the story spreads across an imagined middle America: one where two young lost souls can openly drive from state-to-state in a stolen blue pickup, occasionally satiating their shared taste for human flesh along the way, without having to worry about cops, the FBI or anything other than creepy fellow "eaters." Taylor plays 18-year-old Maren who is abandoned by her heartbroken father (Andre Holland) after she chomps down on the finger of a classmate, revealing her appetite for human flesh. He leaves her with her birth certificate, $50 cash and a cassette tape explaining her situation.

All alone, Maren sets out to find her mother who left home years earlier. Why she left was a mystery, but Maren has some clues as to where she might be. While at a bus stop, she's approached by a creepy and alarmingly soft-spoken Mark Rylance, with his brimmed hat topped with a feather, a fishing vest and a long braided ponytail. He introduces himself as a fellow eater named Sully who smelled Maren from across town. What follows is the film's best and most unsettling scene, as Sully gives Maren a lesson on who they are.

It's hard to figure out the point and purpose of Rylance's character other than to get under our skin. But he does that well. So much so than even Maren skips out on him and hops a bus for Minnesota. During a stop, she meets a drifter named Lee (Chalamet), fresh off of munching on a redneck (yep, he too is an eater). Lee is a bit of a vagabond -- scrawny, tattered jeans, a dirty orange-highlighted crop of hair. The two hit it off with Lee offering to help Maren find her mother.

An inevitable relationship blooms, but it's a hard one to read. Some have called it sensual, sexy, and simmering. But frankly neither character sells that kind of romantic interest. If anything, they're two outcasts who find an unexpected kinship in each other. That's enough to hold our interest. But again, the movie starts to drift in the final third and ends with a time-jump scenario that's too hard to swallow. It's a confounding yet strangely fitting finish to what is an eerily alluring yet equally confounding movie.

Print Headline: ‘Bones and All’