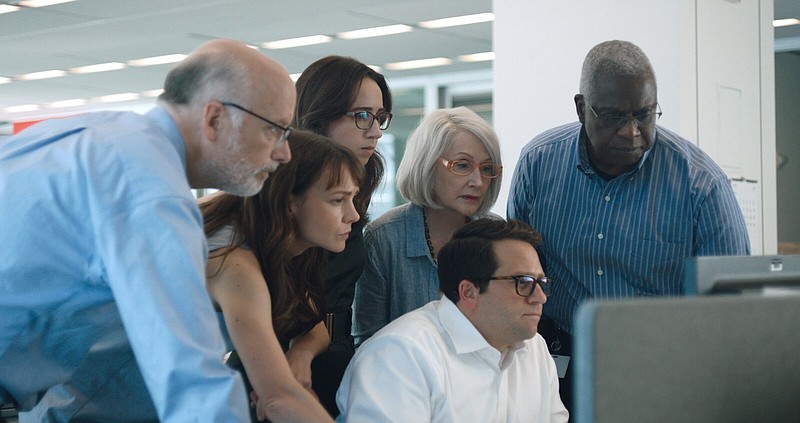 While the fall of film mogul turned convicted sexual predator Harvey Weinstein seemed sudden back in 2017, the Pulitzer Prize-winning stories that revealed his nearly endless list of assaults and machinations to silence his accusers took an astonishing amount of work.

In some ways, Weinstein's crimes were as visible as the movies he produced and distributed, but New York Times reporters Megan Twohey (Carey Mulligan) and Jodi Kantor (Zoe Kazan) had to go to Herculean lengths to get the world to call his actions for what they were.

"She Said" recounts the journalists' determination and the courage some of their sources had in willing to call out Weinstein. Director Maria Schrader ("Unorthodox") and screenwriter Rebecca Lenkiewicz follow closely in the footsteps of "All the President's Men" and "Spotlight" and thankfully understand why those movies worked.

Having a worthwhile story to recount doesn't hurt, either.

Weinstein is now in prison in New York and that he has more charges awaiting him in Los Angeles and London, but when "She Said" begins, he seems untouchable and nearly impossible to cover. Thanks to non-disclosure agreements, his accusers can't speak out about what he did, and potential employees are clueless about the criminal behavior he has engaged in for decades.

Schrader and Lenkiewicz treat Weinstein, vile as he might have been, as a symptom of a much greater disease. Twohey and Kantor encounter so much resistance because felonious assaults are almost treated as the cost of business. One wonders how many more movies Miramax and the later Weinstein Company could have made if they weren't constantly paying to silence their boss' accusers.

Lenkiewicz effortlessly removes the element of certainty for Kantor and Twohey's quest. Potential sources literally slam doors into the reporters' faces. To their credit, the two keep trying. It's what Bob Woodward and Carl Bernstein did.

Lenkiewicz also gives the two just enough personality traits so they seem like people who just happen to be justifiably driven muckrakers. Twohey's new motherhood is adding to the stress of the assignment, and Kantor struggles to explain the investigation to her young daughter. Details like this are essential. Hearing the reporters in "Spotlight" grousing about office space kept the protagonists in that film from coming off like superheroes.

For the most part, Schrader's detached approach is wise. Simply recording the actresses' recounting what Weinstein did is sufficient. Their faces and voices spell out the horror, sorrow and outrage more than adequately. Kazan and Mulligan's reactions don't need any embellishment.

"She Said" lacks some of the visceral jolt that "Spotlight" and "All the President's Men" had. That's a shame because in real life Weinstein hired shady outfits like Black Cube to spy on Twohey, Kantor and The New Yorker's Ronan Farrow. There were real stakes in this investigation, and it should be more obvious on screen.

Some of Lenkiewicz's dialogue sounds as if the characters are explaining the scenario instead of talking with each other. On the plus side, it is great to see Ashley Judd playing herself as the first Weinstein accuser to go on the record. While other performers act out the voices of Rose McGowan and others, Judd imbues "She Said" with enough authenticity to overcome its flaws.