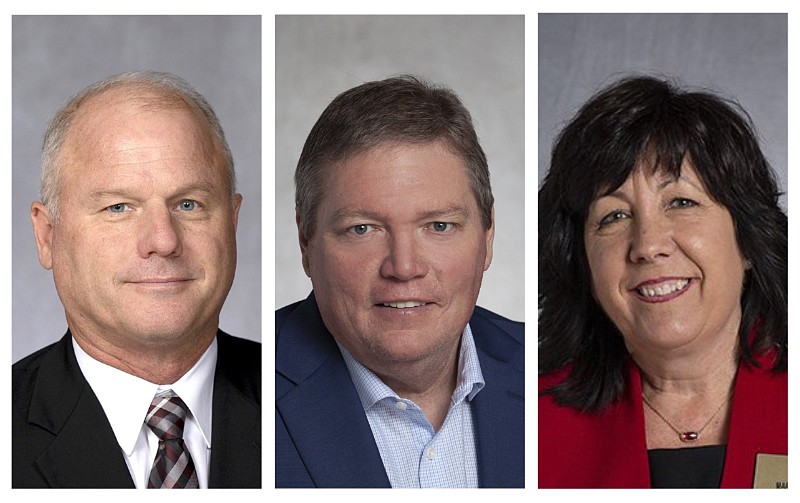 The Common Ground Arkansas group founded by state Sen. Jim Hendren of Sulphur Springs, along with senator-elect Bryan King of Green Forest and state Rep. Mary Bentley of Perryville have each been sanctioned with fines and public letters of caution by the Arkansas Ethics Commission in settlements of ethics complaints filed against them, state records show.

Common Ground Arkansas was fined $50 and issued a public letter of caution in a settlement under which the group agreed that it failed to comply with the reporting requirements of Arkansas Code Annotated 7-6-220 in connection with the "Benton County Values" ad that referenced state Senate candidate Peter Christie of Bella Vista, commission Director Graham Sloan said in a letter dated Monday to Common Ground Arkansas Executive Director Misty Orpin.

In the May 24 Republican primary, Christie lost to state Rep. Jim Dotson of Bentonville, who was elected in the Nov. 8 general election to represent Senate District 34.

Hendren, an independent who left the Republican Party last year, said Thursday that "we don't necessarily agree with the accusation" that the advertisement at issue was "direct campaigning."

He said the settlement "is probably the best outcome to dispose" of the ethics complaint, adding that "$50 is a lot cheaper than continuing to argue about opinions."

Common Ground is a 501c4 nonprofit group. That classification is an IRS category that allows an organization "to promote social welfare," according to the IRS website. Prominent 501c4 organizations include AARP and the National Rifle Association.

In his letter to Orpin, Sloan said that Common Ground Arkansas is not required to register and report as an independent expenditure committee for expenditures related to the "Benton County Values" radio ad based upon the investigation and final action in this case.

While the group is required to file a single independent expenditure report as a non-committee entity for the radio ad, no continuing reporting obligations arise from that expenditure, he said.

And, Common Ground Arkansas will not be required to report donors pursuant to the settlement as the group paid for the radio ad from its general funds, Sloan wrote.

"It noted that there is no active nor pending complaint against Sen. Jim Hendren based on the underlying facts of this case," he said.

In the ethics complaint that he posted on Twitter on May 23, Garner alleged that Hendren, as founder and board member of Common Ground, violated state election law by engaging in expressed advocacy for the direct purpose of influencing the nomination for election or election of candidates.

On Thursday, Garner said that transparency is key and it is important to follow the rules when a group advocates for candidates.

In a separate case, King was fined $150 and issued a public letter of caution in a settlement under which he agreed that he violated Arkansas Code Annotated 7-6-207 (b) by failing to timely report a campaign loan and Arkansas Code Annotated 7-6-207 (a) (1) (B) as a candidate in Senate District 28 by failing to timely file his March and April campaign finance reports, Sloan said in a letter dated Tuesday to King.

Alison Smith filed the complaint against King, Sloan said. King is a Republican and former state lawmaker, who defeated Sen. Bob Ballinger of Ozark in the June 21 runoff election. King was then elected to represent Senate District 28 in the Nov. 8 general election.

Also, Bentley was fined $50 and issued a public letter of caution in a settlement under which she agreed that she violated Arkansas Code Annotated 7-6-207 as a candidate in House District 54 by failing to timely file a January campaign finance report, Sloan said in a letter dated Monday to Bentley.

He said that Bentley attempted to file the report on the day it was due after the secretary of state's office had already closed for the day and she stated that she was unable to do so because the online filing system had not set up a monthly report for filing at that time.

"After the Secretary of State got that issue resolved, [Bentley] filed the report," Sloan said.

He said that the commission reviewed evidence that she submitted reflecting an allegation that she failed to note the use of plastic cups for her campaign in her January campaign finance report was unintentional and an amendment was filed within the 30-day time period with respect to the cups.

"Accordingly, no further investigation or action took place with respect to the plastic cups described in that allegation and [Bentley] shall not be considered to have committed a violation of the applicable statute in connection with that allegation," he said.

In the May 24 Republican primary, Bentley survived a challenge from Faulkner County Justice of the Peace Rose Roland. Bentley was elected to represent House District 54 in the Nov. 8 general election.

Bentley could not be reached for comment by telephone on Thursday.