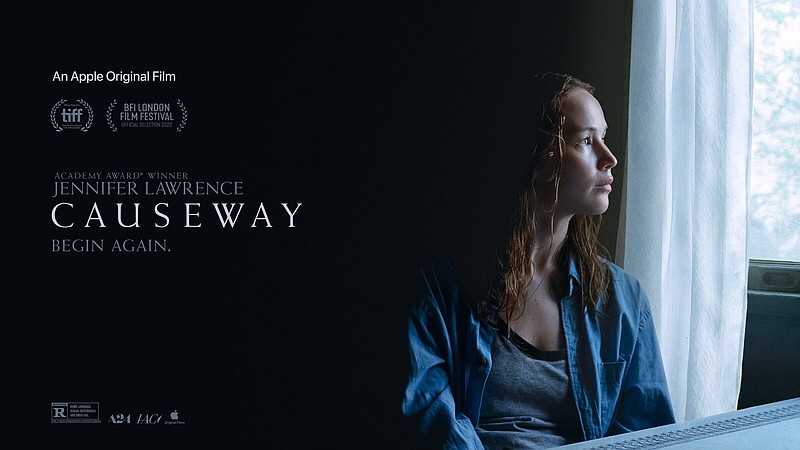 "Causeway" (R, 1 hour, 32 minutes, Apple TV+) A quietly devastating portrait of a soldier (Jennifer Lawrence, superb in the role) struggling to adjust to her life back home in New Orleans after enduring a traumatic injury suffered in an IED attack in Afghanistan. With Stephen McKinley Henderson, Brian Tyree Henry; directed by Lila Neugebauer.

"In Her Hands" (PG-13, 1 hour, 32 minutes, Netflix) Zarifa Ghafari, who at 26 became one of Afghanistan's first female mayors and the youngest to ever hold the position, is the subject of this ambitious, unpredictable documentary as she fights for survival against the backdrop of her country's ever-increasing unraveling. Directed by Tamana Ayazi and Marcel Mettelsiefen and executive produced by Hillary and Chelsea Clinton.

"Resistance: 1942" aka "Burning at Both Ends" (not rated, 1 hour, 50 minutes, On Demand) A self-praising war drama set in the darkest days of World War II in France, which is under Nazi control, as a man with a radio broadcasts a message of hope. With Cary Elwes, Jason Patric, Judd Hirsch; written and directed by Matthew Hill and Landon Johnson.

"Mickey: The Story of a Mouse" (not rated, 1 hour, 29 minutes, Disney+) This charming documentary describes how Mickey Mouse became an overnight sensation when he starred in one of the first synch-sound animated shorts, "Steamboat Willie" in 1928, then follows the character through decades of evolution into different versions of himself that reflect his creator's remarkable career and societal shifts in the nation he came to represent. Directed by Jeff Malmberg

"Shadows" (not rated, 1 hour, 42 minutes, On Demand) A well-structured genre-mixing Italian thriller in which a pair of teenage sisters live in an abandoned hotel after the apparent end of the world with over-protective Mother, where they are sheltered from the ominous Shadows that live in the daylight and infest the world beyond the river. But are the Shadows their biggest problem? With Mia Threapleton (daughter of Kate Winslet), Lola Petticrew, Saskia Reeves; directed by Carlo Lavagna.

"A Unicorn for Christmas" (not rated, 1 hour, 27 minutes, in theaters) A mediocre holiday fantasy in which a young girl, unhappy about having to move from a city to the country when her family takes over an old farm, brightens considerably when she finds a white pony and becomes convinced that the horse is a unicorn. With Sunny Mabrey, Catherine Dyer, Chuck Wicks, Ed Marinaro; directed by Stacia Crawford.

"Next Exit" (not rated, 1 hour, 46 minutes, in theaters) Most suicide stories aren't as comical or as affecting as this one, in which a research scientist proves she can track people into the afterlife, encouraging two strangers to race to join the doctor's contentious study and leave their troubled lives behind. With Katie Parker, Rahul Kohli, Rose McIver, Tongayi Chirisa, Tim Griffin, Diva Zappa; written and directed by Mali Elfman.

"Soft & Quiet" (R, 1 hour, 31 minutes, On Demand) A stress-inducing drama about racism that revolves around kindergarten teacher Emily (Stefanie Estes) and a group of white supremacist women who visit a store to fetch refreshments for their inaugural meeting, where they encounter mixed-race sisters, which rapidly devolves into violence. With Olivia Luccardi, Dana Millican, Melissa Paulo, Jon Beavers; drected by Beth de Araujo.

"The Invaders" (TV-MA, 1 hour, 20 minutes, On Demand) This documentary reveals the impetus behind an often overlooked radicalized generation of civil rights activists made up of young college students, Vietnam vets, musicians, and intellectuals that emerged in Memphis in 1968, directly involved with Dr. Martin Luther King Jr. in the hours leading up to his assassination. With Coby Smith, Charles Cabbage, John B. Smith, John Gary Williams; directed by Prichard Smith.

"The Willowbrook" (not rated, 1 hour, 25 minutes, On Demand) The sneaky side of social media is explored in this thriller in which a wellness influencer invites a recently overdosed follower to seek recovery at her small-town manor, which turns out not to be as serene as is perceived on the internet. With Chris Boudreaux, Jessica Bishop, Erin Day, Lawrence J. Hughes; written and directed by Zach Koepp.

"Plan A" (not rated, 1 hour, 49 minutes, On Demand) Based on an astonishingly dramatic true story but too neatly packaged to be impressive, this World War II drama concerns a group of holocaust survivors who vow to avenge the deaths of their people by poisoning the water supplies in German cities and killing six million Germans, one for every Jew slaughtered by the Nazis. With August Diehl, Sylvia Hoeks, Nikolai Kinski, Michael Aloni; written and directed by Doron and Yoav Paz.

"Sam & Kate" (R, 1 hour, 50 minutes, in theaters) A life-affirming comedy in which Sam (Jake Hoffman), who has returned to his former small-town home to take care of his ailing dad Bill (Dustin Hoffman, Jake's real-life dad), is attracted to Kate (Schuyler Fisk) at the same time that Bill starts to fall for Kate's mom Tina (Sissy Spacek, Schuyler's real-life mother). Does life imitate art? Or is it the other way around? Written and directed by Darren Le Gallo.

"Dylan & Zoey" (not rated, 1 hour, 22 minutes, On Demand) A indie drama in which, with a mere 24 hours left in Los Angeles, Zoey (Claudia Doumit) reaches out to her estranged best friend Dylan (Blake Scott Lewis), and the two try to pick up where they left off -- not as easy as it sounds. With Malcolm Barrett; directed by Matt Sauter.

"I Didn't See You There" (not rated, 1 hour, 16 minutes, On Demand) A masterful first-person documentary from disabled filmmaker Reid Davenport about how he sees the world, from either his wheelchair or his two feet, without having to be seen himself.

"Shantaram" (TV-MA, 52-60 minute episodes, AppleTV+) Based on the internationally bestselling novel by Gregory David Roberts, this 12-part drama series follows fugitive/heroin addict Lin Ford (Charlie Hunnam) who's hiding out in vibrant and chaotic 1980s Bombay. That's where he falls in love, which plays havoc with his freedom.

"Ten-Cent Daisy" (not rated, 1 hour, 30 minutes, On Demand) A dreamy, sometimes nightmarish fantasy drama in which three sisters from a fishing village in the West Indies wind up in Berkeley, Calif., following a traumatic event that threatens to reveal a centuries-old family secret. A decade later, the sisters split up; the youngest, Daisy, the embodiment of the secret, is left the most vulnerable. With Lauren Michelle, Dionne Audain, Ameenah Kaplan, Margaret Laurena Kemp; directed by Lisbon Okafor.

"A Decent Home" (not rated, 1 hour, 26 minutes, On Demand) This documentary offers a scathing look -- involving class and immobility -- at residents of mobile home parks who are battling to save their properties from enroachment by the wealthy. Directed by Sarah Terry.

"Paradise City" (R, 1 hour, 32 minutes, On Demand) A frenetic thriller stocked with iconic actors, among them Bruce Willis as bounty hunter Ian Swan, who is shot and presumed dead after disappearing in Maui waters; his son Ryan (Blake Jenner), his ex-partner (Stephen Dorff), and a local detective (Praya Lundberg) set out to find his killers. With John Travolta; co-written and directed by Chuck Russell.