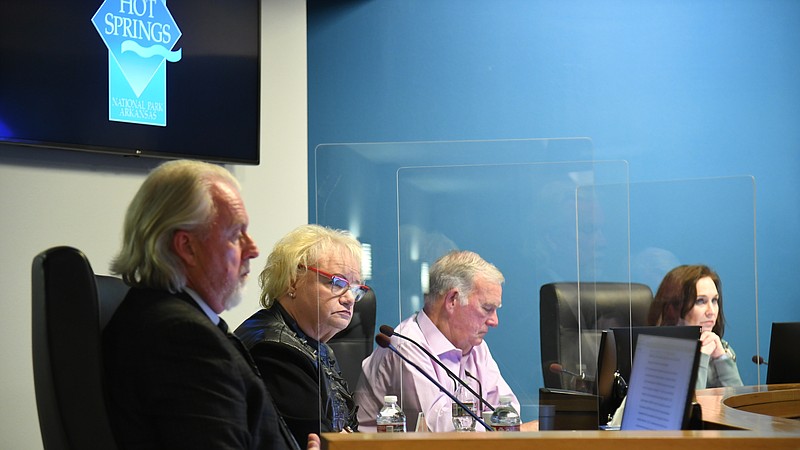 The Hot Springs Board of Directors listens to Hot Springs Metro Partnership Tuesday. The board agreed to let HSMP take over the marketing of the Majestic Hotel site. - Photo by Lance Brownfield of The Sentinel-Record

The Hot Springs Board of Directors delegated the marketing of the Majestic Hotel site to the city's economic development contractor Tuesday, making the Hot Springs Metro Partnership the clearinghouse for all purchase offers and redevelopment proposals.

It's the first time the city's $100,000 contract for services with the partnership includes the marketing of a specific property.

The city is the largest investor in the public-private nonprofit economic development corporation that's affiliated with The Greater Hot Springs Chamber of Commerce.

The contract, which runs from January through December of next year, prohibits the city from taking action on the Park Avenue property it acquired in 2015 until the close of the partnership’s vetting period next Nov. 1. All offers the city receives through Sept. 30 will be forwarded to the partnership for vetting.

"Our plan is to go get proposals, filter them, bring you the best one," local banking executive Scott Dews, chairman of HSMP's Majestic Site Development Committee, told the board.

"You asked to see our criteria. We're in the process of developing that," he said.

The contract gives HSMP the option of presenting proposals prior to Sept. 30. District 5 Director Karen Garcia told the board it needs to see all offers to purchase as they are received.

"I would like to be aware of it before a constituent asks me about it," she said. "As an elected official I'm expected to be aware of certain things."

"There's going to be proprietary information in those proposals," he told the board. "If all that information is made public, I don't think we're going to be able to bring anybody to the table."

The board unanimously adopted Garcia's amendment to the resolution authorizing the contract, agreeing to include "copies of all offers to purchase shall be shared with the board of directors as received" in the contract.

"I don't have any problem sharing that," Dews said. "I think the difficulty we're going to have with developers is if all of their information is made public. That's the concern we have."

Hot Springs Metro Partnership President/CEO Gary Troutman said he would be reluctant to disclose who has submitted redevelopment proposals until the close of the 10-month vetting period.

"I don't know if we'd feel comfortable naming them depending on where we are in the process," he told the board. "We don't want to scare anyone off who could be a viable project for us."

Most of the work Hot Springs Metro Partnership does for the city is shared with the board in broad terms, as nondisclosure agreements prevent the partnership from revealing specifics about the projects it's pursuing. Troutman told the board the same level of nondisclosure in the monthly reports he makes is likely to apply to the marketing of the Majestic.

"Everything that's not NDA is usually in there," he said of the reports required by the partnership’s contract with the city.

"I would think this would kind of follow the same suit. ... We're going to be proactive in our recruitment, but I don't have a feel for how much attention we're going to get," he said.

The board made the redevelopment of the Majestic one of its top priorities in 2021 and 2022. After the city's attempt to solicit proposals in 2020 returned few responses, and the contract to build an outdoor entertainment venue on the site was terminated in July, City Manager Bill Burrough told directors in August the city would be focused on other priorities next year.

Hot Springs Metro Partnership offered to market the site in September. Its involvement was conditioned on being the clearinghouse for all proposals and offers. Dews said HSMP didn't want to be undermined by developers working outside its purview.

"We just don't want anybody to be able to circumvent the process," he told the board in September. "If we go out and pursue developers and bring them to Hot Springs, if all it takes is somebody bringing a real estate contract to cut to the front of the line, that's the only thing we're concerned about."