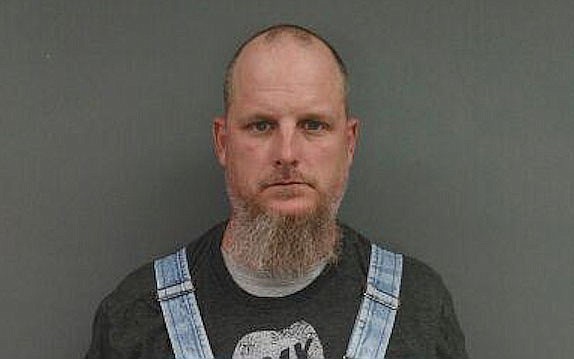 Jon Thomas Mott, of Yellville -- one of four Arkansans charged in the Jan. 6 U.S. Capitol riot -- said in a court hearing on Thursday that he will accept the government's plea offer, according to his attorney, Joe Allen of Branson, Mo.

Thursday's status hearing was held via teleconference from federal court in the District of Columbia.

Allen said details of the plea agreement haven't been made public.

U.S. District Judge Royce C. Lamberth scheduled Mott for a plea hearing on Nov. 30, according to the court docket.

Mott was arrested after FBI agents recognized a "distinctive tattoo" on the ring finger of his left hand while he was working at The Bean Barn, a coffee shop in Flippin. The same tattoo was visible in a video from the Capitol riot, according to the criminal complaint.

Video from the Capitol shows Mott yelling at Metropolitan Police Officers and "pushing against" a baton held by one of the officers, according to the court filing.

In a subsequent court hearing, Mott told a judge that he's self-employed as the owner and operator of a drive-thru coffee shop.

Mott has remained free since his initial arrest on May 13, 2021.

In September, at Mott's request, Judge Lamberth modified his bond conditions so Mott could use his guns for "subsistence hunting." One condition of Mott's release pending trial was that he not possess any firearms or dangerous weapons.

The Jan. 6 riot escalated from a "Stop the Steal" rally when some supporters of then-President Donald Trump entered the U.S. Capitol and attempted to stop Congress from certifying the Electoral College vote indicating that Joe Biden had won the presidential election.

Other Arkansans charged in the Capitol riot include Richard "Bigo" Barnett, 62, of Gravette, and Peter Francis Stager, 43, of Conway, both of whom face felony charges.

Barnett is accused of taking a stun gun into the Capitol. He famously posed for photos with his feet on a desk in House Speaker Nancy Pelosi's office suite.

Stager is accused of using a flag pole to beat a police officer who was face down on the Capitol steps. Stager remains in the District of Columbia jail. He is the only Jan. 6 defendant from Arkansas still incarcerated.

Robert Thomas Snow, 78, of Heber Springs pleaded guilty to a misdemeanor charge for "parading, demonstrating or picketing in the Capitol building." He was sentenced to probation and community service.