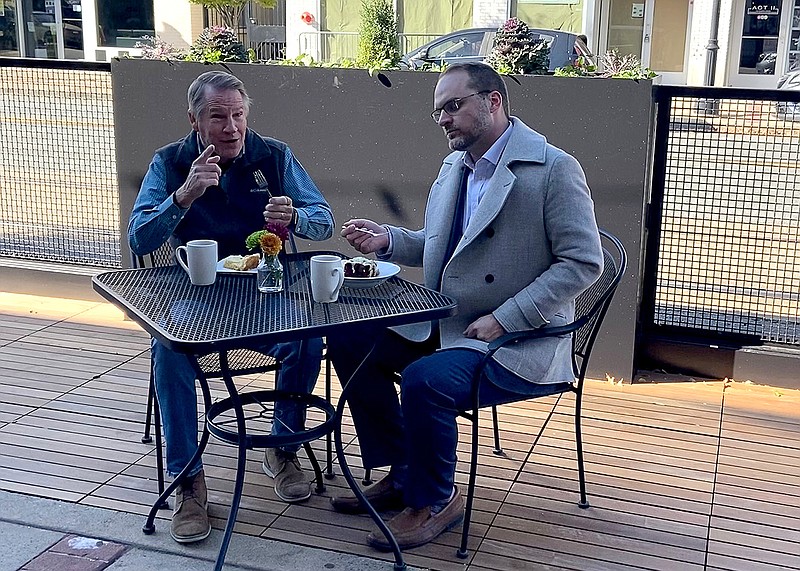 Officials from Rock Region Metro, the City of North Little Rock and the Argenta Downtown Council unveiled the first of two Argenta "parklets" along Main Street on Thursday.

The parklets are street-side spaces created by converting four parking spaces along either side of Main Street by adding safety railings, sidewalk-level decking and planters.

The concept of parklets -- public seating areas that convert curbside parking spaces into vibrant community spaces, such as street seating or curbside restaurant seating -- aims to increase transit and foot traffic, help businesses and enhance already busy downtown areas, according to the National Association of City Transportation Officials, an association of cities and transit agencies that exchange transportation ideas, insights and practices.

"This is an excellent example of what transit-oriented development can do to help attract more visitors to an area," said Justin Avery, chief executive officer of Rock Region Metro, the state's largest public transit agency. "We are excited to assist the City of North Little Rock in the enhancement of the downtown area with a project that not only increases safety surrounding the streetcar rail path but also increases the appeal of Main Street."

AMR Architects, a Little Rock firm that has worked on a number of projects in the revitalization of what is now the River Market District of Little Rock, designed the parklets outside Skinny J's, Reno's and Crush Wine Bar in North Little Rock. According to a news media release, more will be added to the west side of Main Street between Fourth and Fifth Streets, slowing traffic on a busy four-lane road the streetcar shares with mixed traffic.

Parklets pre-date the pandemic, but during the heart of it, they became more popular among urban planners as a way to provide a place to socialize in an outdoor space where people felt safe to gather.

In Fayetteville, an entertainment district ordinance in 2020 was coupled with a measure enabling businesses to use public parking spaces or their private property as sit-down space. Parklets began popping up along Dickson Street over that summer, replacing otherwise empty parking spaces, with stools and benches enclosed in short fencing.

A year later, in Hot Springs, officials created a parklet at 348 Malvern Ave. named after the late Henry Glover, a professional trumpet player, arranger and producer.

The total cost of the parklets project is $213,436, with $170,748 -- or 80% of the funding -- coming from the transit agency. The City of North Little Rock contributed $35,000 and the Argenta Arts District contributed $7,688. Business partners adjacent to the parklets will provide tables and seating for the parklets.

Coinciding with the opening of the parklets is a city-paid public parking area promotional campaign to showcase about 200 free public parking spaces located one half-block east of Main Street, between Sixth Street and Bishop Lindsey Avenue and between Fifth and Sixth streets.

Mayor Terry Hartwick was unable to attend Thursday's ribbon-cutting, but he said in a statement that he's proud of the work the city's elected officials and other community leaders have done for the downtown entertainment district.

"We are pleased to be a part of this public-private partnership that offers a win for all the involved partners, as well as residents and guests," he said.

Sarah Reeves, the manager at Skinny J's, said she has been anticipating the opening of the parklets since the first announcement of their development.

"Seeing it coming to fruition is very, very exciting," she said. "We have a lot of times where even though we're a big place, we feel it, so that extra seating will be nice for us. After covid, because some people are still not comfortable going in and that kind of thing, so the outside seating is going to be a game changer. And with this being an entertainment district and being able to go outside with a beverage, it's totally different."

Louis France, owner of Reno's, said he's been downtown for 20 years and has always wanted something like the permanent outside seating the parklets will provide.