Speaker: Will stay as member of House by Compiled by Democrat-Gazette Staff From Wire Reports | November 18, 2022 at 5:17 a.m. 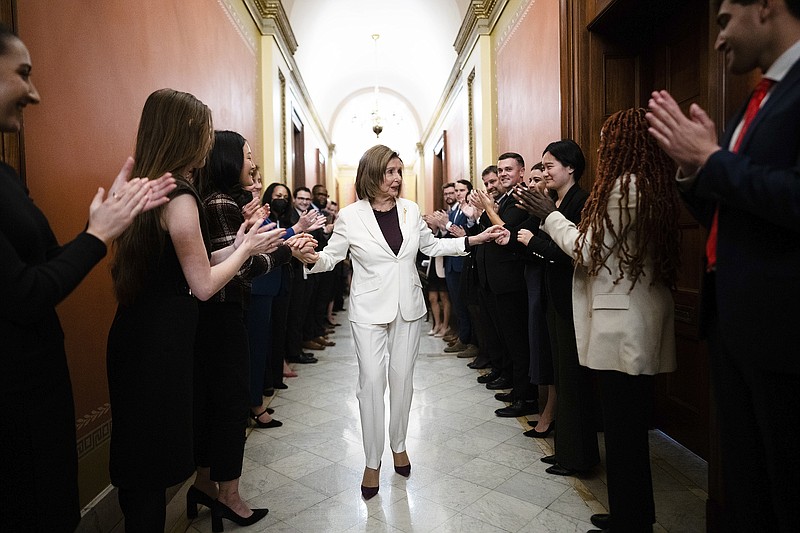 Staff members applaud House Speaker Nancy Pelosi after she announced Thursday that she would step down from her leadership position. (The New York Times/Erin Schaff)

WASHINGTON -- House Speaker Nancy Pelosi said Thursday that she will not seek a leadership position in the new Congress, ending a historic run as the first woman with the gavel and making way for a new generation to steer the party after Democrats lost control of the House to Republicans in the midterm elections.

In a spirited speech on the House floor, Pelosi announced that she will step aside after leading Democrats for nearly 20 years and in the aftermath of the attack on her husband, Paul, last month in their San Francisco home -- and after having done "the people's work."

The California Democrat, a pivotal figure in U.S. history and perhaps the most powerful speaker in modern times, said she would remain in Congress as the representative from San Francisco, a position she has held for 35 years, when the new Congress convenes in January.

"I will not seek reelection to Democratic leadership in the next Congress," she said. "For me, the hour has come for a new generation to lead the Democratic caucus that I so deeply respect."

Now, she said, "we must move boldly into the future."

Dressed in white in a nod to the suffragettes, Pelosi was greeted with cheers as she arrived for the hastily called address. She received a standing ovation when she closed, lawmakers and guests one by one crowding her with hugs, many taking selfies of a moment in history.

President Joe Biden, who had encouraged Pelosi to stay on as Democratic leader, spoke with Pelosi in the morning and congratulated her on her historic tenure as speaker of the House.

"History will note she is the most consequential Speaker of the House of Representatives in our history," Biden said in a statement, noting her ability to win unity from her caucus and her "absolute dignity."

It's an unusual choice for a party leader to stay on after withdrawing from congressional leadership, but not without precedent and Pelosi has long defied convention in pursuing power in Washington.

In an interview with reporters after her announcement, Pelosi said she won't endorse anyone in the race to succeed her and she won't sit on any committees as a rank-and-file lawmaker. She said the attack on her husband "made me think again about staying."

But in the end, after the election, she decided to step down.

"I quite frankly, personally, have been ready to leave for a while," she said. "Because there are things I want to do. I like to dance, I like to sing. There's a life out there, right?"

During her remarks on the House floor, Pelosi recapped her career, from seeing the Capitol the first time as a young girl with her father -- a former New Deal congressman and mayor -- to serving as speaker alongside U.S. presidents, noting three of the four, but not mentioning Donald Trump.

"Every day I am in awe of the majestic miracle that is American democracy," she said.

At one point, she compared the better-than-expected showing for Democrats in the midterms, the first national election after the Jan. 6, 2021, attack on the Capitol, as "proof through the night that our flag was still there," drawing cheers from colleagues.

The American historian Jon Meacham helped Pelosi with her speech, but an aide said she added that impromptu line herself.

On short notice, lawmakers who have been waiting and wondering about the long-serving leader's plans filled the House, at least on the Democratic side, and Senate Majority Leader Charles Schumer joined. He later joined a throng of lawmakers and hugged and kissed Pelosi on the cheek.

The Speaker's Gallery was filled with Pelosi's staff and guests. Some Republicans, including some newly elected members, also attended, though House Republican Leader Kevin McCarthy, who's seeking the speakership in the new Congress, did not, telling reporters afterward that he was "busy, unfortunately."

Pelosi was twice elected to the speakership and has led Democrats through consequential moments, including passage of the Affordable Care Act with President Barack Obama and the impeachments of Trump.

Her decision Thursday paves the way for House Democratic leadership elections next month when Democrats reorganize as the minority party for the new Congress.

Pelosi's leadership team, with Majority Leader Steny Hoyer of Maryland and Democratic Whip James Clyburn of South Carolina, has long moved as a triumvirate. All now in their 80s, the three House Democratic leaders have faced restless colleagues eager for them to step aside and allow a new generation to take charge.

Hoyer said after Pelosi's remarks that "it is the time for a new generation of leaders" and that he will also step down from leadership but stay in Congress. Clyburn, the highest-ranking Black American in Congress, has said he expects to stay in Congress next year and hopes to remain at the leadership table.

Democratic Reps. Hakeem Jeffries of New York, Katherine Clark of Massachusetts and Pete Aguilar of California have similarly moved as a trio, all working toward becoming the next generation of leaders. Jeffries could make history in the future if Democrats regain control, and he enters the race to become the nation's first Black speaker of the House.

'POWER OF THE GAVEL'

Pelosi first became speaker in 2007, saying she had cracked the "marble ceiling," after Democrats swept to power in the 2006 midterm elections in a backlash to then-President George W. Bush and the wars in Iraq and Afghanistan.

When she was poised in 2018 to return as speaker, in the Trump era, she vowed "to show the power of the gavel."

Pelosi has repeatedly withstood leadership challenges over the years and had suggested in 2018 she would serve four more years as leader. But she had not discussed those plans more recently.

Typically unsentimental, Pelosi let show a rare moment of emotion on the eve of the midterm elections as she held back tears discussing the assault on her husband of nearly 60 years.

Paul Pelosi suffered a fractured skull after an intruder broke into their home in the middle the night seeking the Democratic leader. The intruder's question -- "Where is Nancy?" -- echoed the chants of the pro-Trump rioters at the Capitol as they hunted for Pelosi and tried to stop Congress from certifying Biden's election victory over Trump.

David DePape is being held without bail on attempted murder and other charges in what authorities said was a political attack.

Historians have noted that other consequential political figures had careers later as rank-and-file members of Congress, including John Quincy Adams, the former president, who went on to serve for nearly 18 years in Congress.

In 1986, Rep. Sala Burton, D-Calif. -- whose husband Rep. Phillip Burton, D-Calif., mentored Pelosi before his death -- gave Pelosi her blessing to mount a congressional campaign as her successor if a special election were to be called in the event of her death. In 1987, Pelosi faced her first -- and last -- competitive race against a crowded field of 13 candidates, edging out Harry Britt, a gay activist who succeeded Harvey Milk on the San Francisco Board of Supervisors. Several months later, the 47-year-old mother of five won the seat against Republican Harriet Ross to finish Burton's two-year term.

Pelosi wasted no time making her mark in the House, taking up China's threats against Taiwan as a top priority for her and her constituents in San Francisco's Asian American community. In 1991, Pelosi famously stood alongside Reps. Ben Jones, D-Ga., and John Miller, R-Wash.. to unfurl a banner reading, "To those who died for democracy in China" at Tiananmen Square, where students defending democracy were killed two years earlier. Those who know her best point to the massacre at Tiananmen Square as a catalyst, drawing Pelosi in both as a lawmaker representing San Francisco's prominent Chinese community and as a mother who was pained watching college-age students, like her own children, being persecuted for defending democracy.

Her chance to enter leadership came in 1999 when she decided to challenge Rep. Hoyer for majority whip, assuming that the seat opened up if Democrats won back the majority in November 2000. Though Republicans kept the majority that year, then-Democratic Minority Whip Rep. David Bonior, D-Mich., resigned the post in 2001, sparking a rematch between the two former interns to Rep. Daniel Brewster, D-Md., Pelosi became the first woman to win the post -- by roughly 20 votes.

Ahead of the 2008 election, Pelosi faced her first major defeat as the top Democrat on the House floor when members overwhelmingly voted against a $700 billion plan to bail out Wall Street. But working aggressively with the Senate, she clinched a new deal four days later that passed both chambers and averted economic collapse.

The election of Obama later that year gave congressional Democrats the ability to finally pass legislation they were unable to under a Republican.

The Obama administration spent much of its political capital crafting the Affordable Care Act to broadly overhaul health care in the United States. And for over a year before the 2010 midterm elections, Pelosi worked relentlessly to muscle the bill into law -- an almost insurmountable challenge as House Democrats knew they were risking their political careers if they supported the controversial legislation. After the Senate lost its filibuster-proof majority, many considered a "skinny" health care bill as an alternative to get bipartisan support. Instead, Pelosi took charge and worked to get the legislation over the finish line in the House.

With Biden as president, Pelosi faced her most daunting task as she tried to meld support within her caucus for two planks of his administration's priorities. After the Senate crafted and passed a bipartisan infrastructure bill, Pelosi held the legislation as leverage to ensure her chamber could first find agreement on Biden's social spending package and pass both bills together. But as negotiations for Biden's "Build Back Better" bill stalled -- and with moderate and vulnerable Democrats clamoring for legislative wins to tout ahead of the 2022 midterms -- Pelosi maneuvered getting Biden to break the stalemate by telling House Democrats that he supported decoupling the legislation and promising liberals he would work with the Senate to pass their priority bills.

Then, in late 2020, after the infrastructure bill passed, Sen. Joe Manchin III, D-W.Va., announced he would not support the $3.5 trillion "Build Back Better" bill, citing climbing inflation. His statement sent leaders, including Pelosi, back to the drawing board.

During that time, Pelosi effectively kept her slim majority together to pass numerous bills, including a global competitiveness bill against China, a measure to help veterans exposed to burn pits get health care, a gun-control bill and, most recently, an assortment of bills funding the police. Most of those bills were not passed easily, including the police funding bills, which were often pulled from floor vote consideration after liberals and Congressional Black Caucus members objected.

While the slim margin allowed members to easily raise objections to measures, Pelosi was still able to use the powerful ability she has to find the votes and bend members' will to get there. It's a trait that even Republicans, including Minority Leader McCarthy, have admitted admiring.

"You could argue she's been the strongest speaker in history," former House speaker Newt Gingrich, R-Ga., said in an interview last year. "She has shown more capacity to organize and muscle, with really narrow margins, which I would've thought impossible."

Information for this article was contributed by Lisa Mascaro, Kevin Freking, Farnoush Amiri and Mary Clare Jalonick of The Associated Press and by Marianna Sotomayor and Paul Kane of The Washington Post. 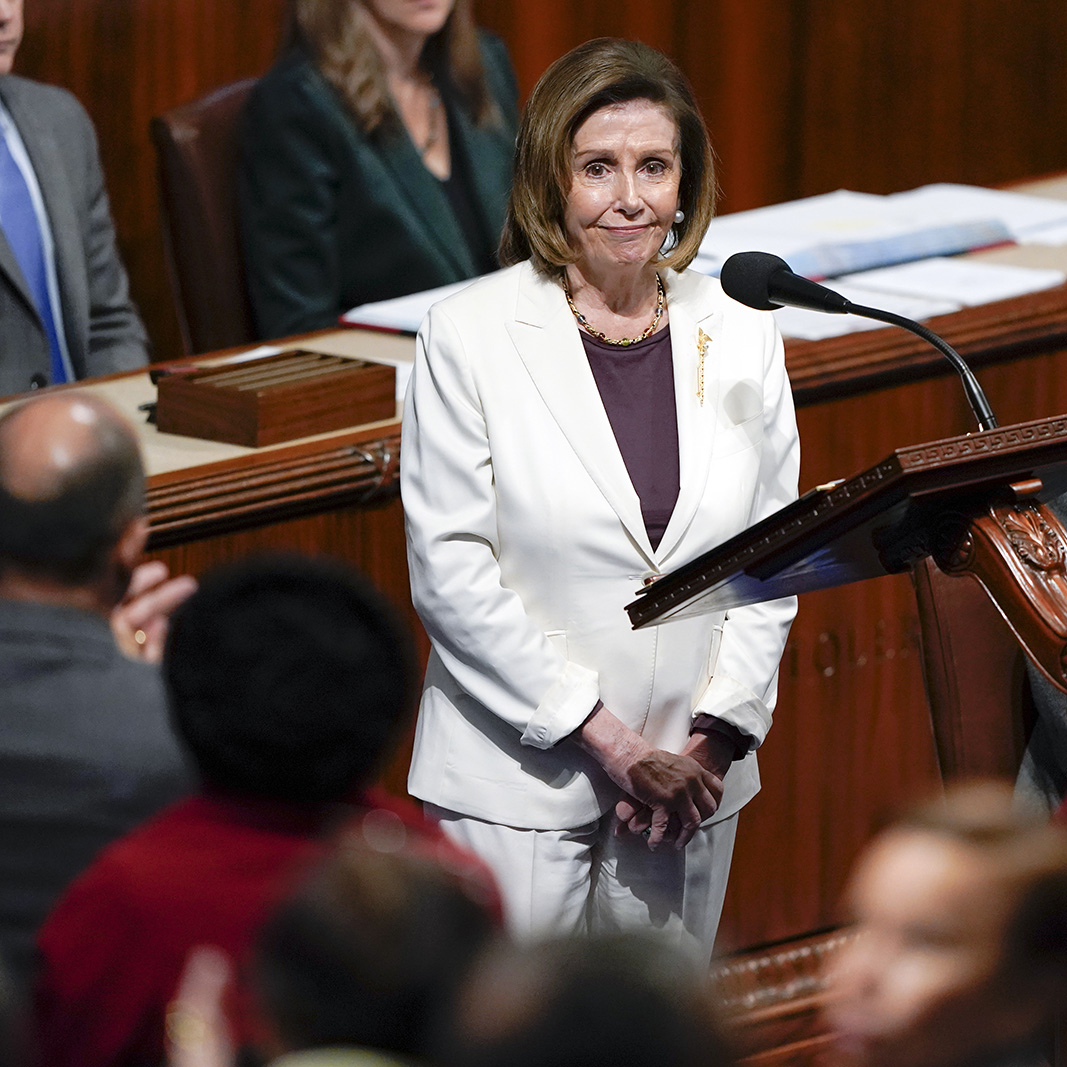 House Speaker Nancy Pelosi acknowledges applause from lawmakers Thursday after speaking on the House floor. “For me, the hour has come for a new generation to lead the Democratic caucus that I so deeply respect,” she told colleagues. (AP/Carolyn Kaster)