Texas 4-star holds Hogs 'in a high place' on list 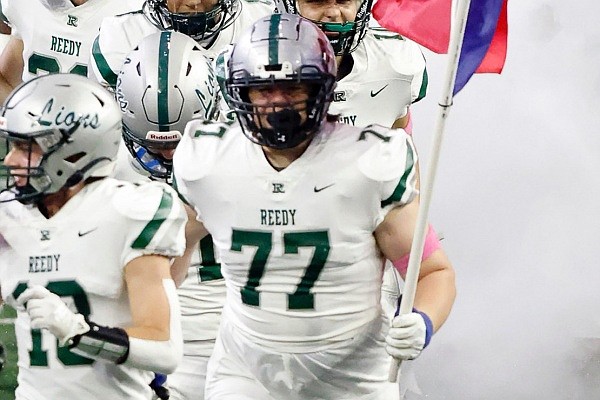 Arkansas 4-star junior offensive line target Max Anderson has been to Fayetteville numerous times over the years, but last week he visited as a recruit for the first time.

He has visited his sister, Belle, who graduated from Arkansas last year and lives in the Fayetteville area, in the past and accompanied his brother, Nate, an offensive lineman, to the school during the recruiting process prior to him signing with Oklahoma in 2020.

“I’d say really connecting with Coach Pittman, Coach Kennedy and all of the players,” Anderson said. “(In) multiple talks with both of the coaches, my family and I felt really comfortable and at home around Coach Kennedy and Pittman. Got a chance to hang out with the players and I really enjoyed it.”

Anderson hung out with offensive linemen Brady Latham and Patrick Kutas after the game.

“Brady said he’s had three coaches since he’s been there and he said the difference between Kennedy and the others are huge,” Anderson said. “He said he (likes how Kennedy) talks to them like men and doesn't aimlessly scream.”

A consensus 4-star prospect, On3.com rates Anderson the No. 10 interior offensive lineman and No. 151 overall recruit in the nation in the class of 2024.

The Razorbacks appear to be a in a good spot for Anderson.

“(I) hold them in a high place on my top schools and (Arkansas) holds the standard and expectations much higher for other schools I have in mind, “ he said. “I loved the vibe of the campus on game day.”