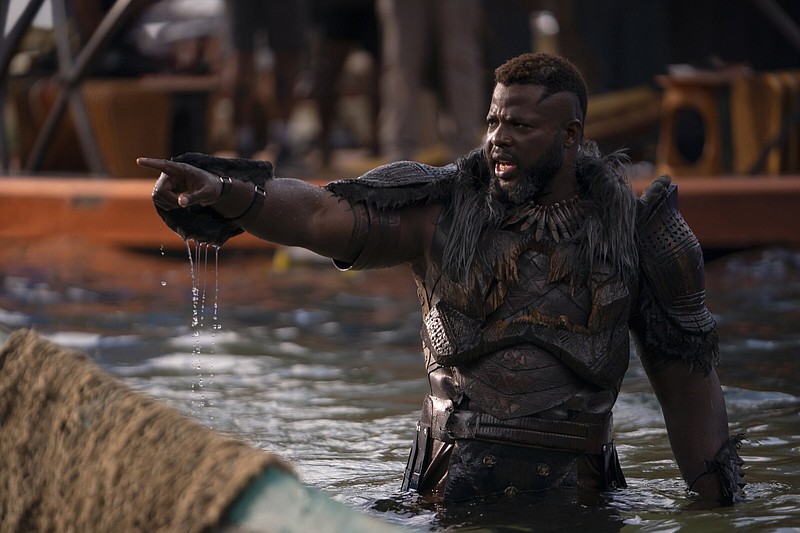 Winston Duke — as M’Baku — rises from the water in a dramatic moment from “Black Panther: Wakanda Forever.” The sequel made $180 million at U.S. and Canadian theaters last week.

The box office roared back to life with the long-awaited release of “Black Panther: Wakanda Forever.” The Marvel sequel earned $180 million in ticket sales from more than 4,396 theaters in the United States and Canada, according to estimates from The Walt Disney Co. on Sunday, making it the second biggest opening of the year behind “Doctor Strange in the Multiverse of Madness.” Overseas, it brought in an additional $150 million from 50 territories, bringing its worldwide total to $330 million.

“Wakanda Forever” was eagerly anticipated by audiences and exhibitors, who have weathered a slow spell at the box office since the summer movie season ended and there were fewer bigger budget blockbusters in the pipeline. The film got off to a mighty start a bit stronger than even the first film with an $84 million opening day, including $28 million from previews on Nov. 10.

“Some may have hoped for $200 million like the first film, but this is solid,” said Paul Dergarabedian, Com-score’s senior media analyst. “This is the type of movie that theaters really need to drive audiences.” The first film opened to $202 million in February 2018 and went on to gross more than $1.4 billion worldwide, making it one of the highest grossing films of all time and a cultural phenomenon. A sequel was inevitable, and development began soon after with director Ryan Coogler returning, but everything changed after Chadwick Boseman’s unexpected death in August 2020. “Wakanda Forever” became, instead, about the death of Boseman’s King T’Challa/Black Panther, and the grieving kingdom he left behind. Returning actors include Angela Bassett, Lu-pita Nyong’o, Letitia Wright, Winston Duke and Danai Gurira, who face off against a new foe in Tenoch Huerta’s Namor.

Holdovers populated the rest of the top five, as no film dared launch nationwide against a Marvel behemoth. Second place went to the DC superhero “Black Adam,” with $8.6 million, bringing its domestic total to $151.1 million. “Ticket to Paradise” landed in third, in weekend four, with $6.1 million. The Julia Roberts and George Clooney romantic comedy has made nearly $150 million worldwide. “Lyle, Lyle, Crocodile” and “Smile” rounded out the top five with $3.2 million and $2.3 million, respectively.

Some awards hopefuls have struggled in their expansions lately, but Searchlight Pictures’ “The Banshees of Inisherin,” with Colin Farrell and Brendan Glee-son, looks like an exception. The Martin McDonagh film expanded to 960 theaters in its fourth weekend and got seventh place on the charts with $1.7 million, bringing its total to $5.8 million.

“It’s been a very interesting post-summer period for movie theaters, with some gems out there doing well like ‘Ticket to Paradise’ and ‘Smile,’” Dergarabedian said. “But movie theaters can’t survive on non-blockbuster style films. The industry needs more of these.” The weekend wasn’t completely without any other high-profile releases. Steven Spielberg’s autobiographical drama “The Fabelmans ” opened in four theaters in New York and Los Angeles with $160,000. Universal and Amblin will roll the film out to more theaters in the coming weeks to build excitement around the likely Oscar-contender. Michelle Williams and Paul Dano play parents to the Spielberg stand-in Sammy Fabelman, who is falling in love with movies and filmmaking as his parents’ marriage crumbles.

“This will be an interesting holiday season,” Dergarabedian said. “I think a lot of the dramas and independent films will have their time to shine over the next couple months.” Entertainment companies are struggling with a box office that has been slow to recover from the pandemic. Ticket sales in the United States and Canada total $6.5 billion, down 33% from same period in 2019, according to Comscore. Aside from October 2020, when many theaters were closed because of the coronavirus pandemic, this was the worst October for Hollywood in 21 years, ever since the aftermath of the 9/11 attacks.

Cineworld, which owns the Regal theater chain in the United States, recently filed for bankruptcy. Last Friday, with losses mounting at its streaming operation, Disney said it began a cost-cutting campaign that will include layoffs and a “rigorous review of the company’s content and marketing spending.” Opening in wide release this weekend are United Artists Releasing’s “Thirteen Lives” and Universal Pictures’ “She Said.”