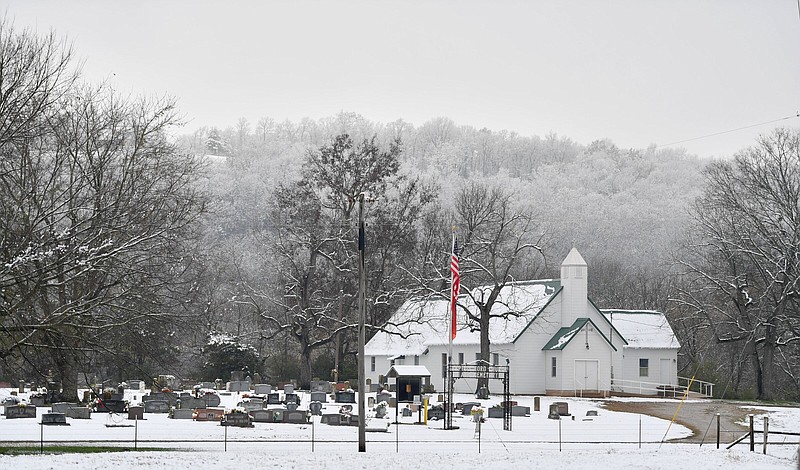 Snow covers the landscape Tuesday around Baptist Ford Community Church along the West Fork of the White River in southern Washington County. The U.S. Religion Census, which was released this month, was able to locate 7,428 houses of worship within Arkansas. (NWA Democrat-Gazette/Andy Shupe)

Arkansas has more churches, per capita, than any other state in the union, according to the newly released 2020 U.S. Religion Census.

A lot of the churches are Baptist, particularly in Arkansas.

Roughly one in five, or 1,551, of the state's congregations are affiliated with the Southern Baptist Convention. The nation's largest Protestant denomination has 607,751 adherents -- roughly one out of every five Arkansans.

Three other Baptist bodies made the state's top 10 list.

When grouped together, independent or nondenominational churches were second, with 248,994 adherents spread across 861 congregations.

The Catholic Church, which had 129 congregations listed, was third. Over the past four decades, the number of Catholics in Arkansas has nearly tripled, growing from 56,911 in 1980 to 153,358.

The United Methodist Church, the state's second-largest religious group for more than a century, is now fourth, with 134,454 adherents.

The Assemblies of God, which was founded in Hot Springs in 1914, was seventh, with 69,916 adherents.

The Church of Jesus Christ of Latter-day Saints has more than quadrupled in Arkansas since 1980, rising from 7,480 adherents to 32,307 adherents. It is now ninth.

Nationwide, Presbyterians, Disciples and other mainline Protestant groups have been struggling for generations.

Many evangelical denominations, which grew in the second half of the 20th century, are now struggling in the 21st.

The Catholic Church remains the country's largest religious group, with 61.9 million adherents, up from 58.9 million in 2010. The Southern Baptist Convention dropped from 19.9 million to 17.6 million.

The number of nondenominational congregations rose from 35,496 to 44,319 and their number of adherents climbed from 12.2 million to 21.1 million.

A team of roughly seven researchers worked for a year and a half to find as many nondenominational congregations as possible, using lists of old churches and scouring the internet and mailing lists for new ones, according to Scott Thumma, director of the Hartford Institute for Religion Research at Hartford International University and the person who oversaw the nondenominational count.

Even so, it's possible that a few were overlooked or miscategorized, researchers said.

"I would never bet my house on it being 100% perfect, but I think it is a fairly accurate representation, even if we've missed some," Thumma said.

Their sizes range immensely, but some are massive.

A majority of the 100-largest Protestant megachurches in the U.S. are nondenominational, he said.

And they're growing, researchers said.

Nationally, "the big gainers are the nondenominational churches," said Rich Houseal, Research Director at the Church of the Nazarene Global Ministry Center.

"My guess is that a lot of them are new, that the entrepreneurs are starting their own new churches, not affiliating with a denomination, and they seem to have ... picked up [adherents] from the losses in both mainline and evangelical churches."

Because there's no single list of nondenominational churches, it's particularly hard to quantify them.

While the Catholic Church has a sizeable presence in almost every state, Southern Baptists are abundant, not only in the South, but also in border states and across much of the Southwest.

There are 1 million or more Southern Baptists in each of six states (Texas, Georgia, North Carolina, Tennessee, Alabama and Florida) but also nearly 636,327 in Missouri and 497,030 in California.

Prior to World War II, the federal government collected and published data about religious affiliation. Since then, the task has been tackled by the private sector, initially by the National Council of Churches, more recently by the Association of Statisticians of American Religious Bodies.

"The committee that they appoint to do this study are all volunteers, so we all have other jobs," noted Houseal, the Nazarene statistician and the association's secretary-treasurer.

"It's about a four-year process, from start to finish," he said.

The amount of work is staggering, according to Ryan Burge, an Assistant Professor of Political Science at Eastern Illinois University in Charleston, Ill., who uses the data extensively.

"It's an impossible task," he said.

The census results are a godsend for academics who study religion, he noted.

"If you didn't have this, what would you have? The answer is 'Not much,'" he said. "I'm happy this exists because it keeps me in business. Hundreds of papers are written every year using this data as well, so it's a totally valuable tool," he said.

Available at usreligioncensus.org/node/1639, it offers voluminous data about religious adherence on a federal, state and county level, also providing groupings for metropolitan and micropolitan areas.

In the Fayetteville-Springdale-Rogers metropolitan area, there are 87,469 Southern Baptists but 65,566 Catholics.

Arkansas' Southern Baptist congregations, as well, grew from 1,515 a decade earlier to 1,551.

Archie Mason, senior pastor of Central Baptist Church in Jonesboro since 2005, said Southern Baptists are continually planting new congregations -- in their own communities and around the globe.

Average Sunday attendance at Central Baptist has grown, during Mason's tenure, from about 800 to 3,000. These days, it is helping to launch new congregations in its own backyard.

"We planted two in Jonesboro. We planted one in Newport and we have one that we are planting at Paragould right now," he said.

"He tells us in the Great Commission at the end of Matthew, to go and make disciples of all nations and to teach them," he said. "We believe we're being faithful."

The Church of Jesus Christ of Latter-day Saints, which has seen sharp growth in Arkansas and elsewhere, has also placed an emphasis on evangelism, sending missionaries to every corner of the country.

In an email, Carlton Wing, Stake President for the North Little Rock Arkansas Stake, portrayed the increase as a positive development.

"Having witnessed that growth personally throughout my life I've come to understand that when the faith community grows it strengthens the overall community. It is good for everyone regardless of religious persuasion to have active community instruction on loving your neighbors, serving the needy, being kind and compassionate. This is what Jesus Christ teaches," he said.