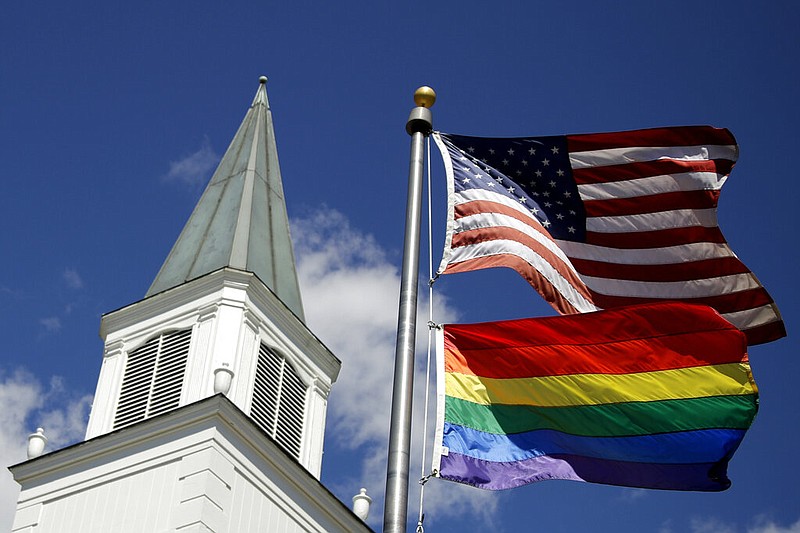 A gay pride rainbow flag flies along with the U.S. flag in front of the Asbury United Methodist Church in Prairie Village, Kan., in this April 19, 2019 file photo. (AP/Charlie Riedel)

The Arkansas Conference of the United Methodist Church will decide today whether to allow 38 of its congregations to leave the denomination.

Other churches have cited "reasons of conscience" concerning denominational developments related to "the practice of homosexuality or the ordination or marriage of self-avowed practicing homosexuals."

The 38 account for roughly 6% of the state's United Methodist congregations, but 14% of its weekly attendance.

They voted, each by better than 2-to-1, to sever ties; in 22 instances, the vote was unanimous.

Delegates at today's special session of the Arkansas Annual Conference in Hot Springs will be asked to ratify their decisions.

Bishop Gary Mueller, who is retiring Dec. 31, will preside over the meeting in Horner Hall at the Hot Springs Convention Center. Ratification is the only substantive agenda item.

A statewide group, Arkansans Staying United, will attempt to block some of the departures. Jonesboro congregants who want their church to remain United Methodist will also be there to voice opposition.

It takes a majority vote to ratify a disaffiliation.

Paragraph 2553 of the denomination's Book of Discipline, approved at a special session of its general conference in St. Louis, created a temporary escape route for a certain category of unhappy congregations.

Titled "Disaffiliation of a Local Church Over Issues Related to Human Sexuality," it requires the departure to be related to "reasons of conscience regarding a change in the requirements and provisions of the Book of Discipline related to the practice of homosexuality or the ordination or marriage of self-avowed practicing homosexuals as resolved and adopted by the 2019 General Conference, or the actions or inactions of its annual conference related to these issues which follow."

Envisioned, initially, as an exit pathway for progressives, it sunsets on Dec. 31, 2023.

Traditionalists, perceiving a leftward drift in the denomination, have latched onto the provision in recent months, fearful that the window of opportunity for departure is about to permanently close.

They typically agree with the doctrinal positions on sexuality that were reaffirmed in St. Louis in 2019, but are frustrated that the provisions are openly defied in parts of the country.

While debates over sexuality have drawn heavy media coverage, traditionalists say the two sides have fundamental differences concerning the authority of Scripture, the divinity of Christ, the pathway to salvation and the necessity of enforcing the Book of Discipline.

Disaffiliation agreements between Arkansas conference officials and local church leaders have already been negotiated, but need to be ratified by the delegates.

Among other things, the contracts require breakaway congregations to pay an additional tithe based on their income over the past 12 months.

The Jonesboro congregation, with average weekly attendance of 1,577, was the first Arkansas church to utilize the new disaffiliation process, conference officials say. It is also is the state's second-largest congregation and one of the 100 largest United Methodist congregations in the country.

Average attendance at the others varies, from 812 at Heritage Church in Van Buren to 10 at Smyrna United Methodist Church in Clark County.

The combined average weekly attendance is 6,138, according to an analysis on the Facebook page for Arkansans Staying United.

Today's meeting begins at 10 a.m. and will be livestreamed at arumc.org/ac2022specialsession.

Lay members who attended the June 2022 Annual Conference Session are eligible to attend and to vote. All of the conference's clergy members are authorized to participate as well.

The 22 congregations that unanimously voted for disaffiliation will be considered first, in alphabetical order. Next will be Heritage Church in Van Buren, which had 98% support for disaffiliation. Others with lower percentages will follow, ending with Jonesboro, which had the narrowest margin at 69%.

After a member of the Conference Board of Trustees moves to recommend a church's disaffiliation agreement, both sides will have the opportunity to present three two-minute speeches. After a one-minute closing statement, the vote will be held, according to the session rules.

"Be prepared for parliamentary procedures from the floor and watch your what's app for how to vote," a member of the Voting Strategy Team, J.J. Whitney, wrote in an email to supporters.

"It may be a long meeting, so please charge your phone, bring snacks/water, and a blanket or warm clothing as the arena gets cold."

Arkansans Staying United leaders intend to support some disaffiliation motions while opposing others.

Yes votes are more likely when the church "has a high percentage of people who voted to disaffiliate," the message stated

"We see the future of the Arkansas United Methodist Church as one who embraces full inclusion for all. If some churches have a high percentage of people who do not hold that vision, we should support disaffiliation," it said.

A church is more likely to get "yes" votes, the email indicated, when its "identity is no longer United Methodist AND there's a UM presence close to the community for those who wish to stay UMC."

The team, which has roughly a dozen members, will also consider whether the churches "have followed a fair process and have turned in paperwork by the deadline," the email stated.

Katie Pearce, pastor of First United Methodist Church in Batesville and a member of the Arkansans Staying United voting strategy team, said they will consider the congregation's wishes and the way it handled the disaffiliation process before making their decisions.

"If the congregations want to leave and the process is fair and gives voice to all perspectives and the congregation votes to leave, then it should not be a hostage situation. They should be allowed to go," she said.

Roy Ockert, former editor of the Jonesboro Sun and a longtime member of First United Methodist Church in Jonesboro, categorized the process there as "terribly unfair from the very beginning," saying that opponents of disaffiliation were denied access to membership rolls, struggled to obtain financial information and were not given a fair opportunity to make their case.

He will be in Hot Springs tomorrow with others who share that view.

The debate over disaffiliation has harmed the congregation, he said.

"I thought the pastor was a good friend of mine. And I trusted him. And I always thought he was a fair person, but the process was not fair," he said.

Since the vote, the Jonesboro members who opposed disaffiliation have been worshipping at the Valley View School District's performing arts center.

Holly Hall, is among those attending the alternate services. She'll also be urging delegates to closely examine the Jonesboro vote.

"We're continuing to fight because we feel like the injustices that were present in this process were so egregious," she said. "This is the place where we hope we can actually get people to understand what we went through and see our perspective."

"We have biblical and theological differences within our denomination that make it difficult for us to coexist," he said.

Withholding ratification would be unjustified, he said.

"We have gone through the process and we have been approved at every level. To not approve us, at this point, would be a breach of trust. It would be a bad faith," he said.

The 944 members who voted for disaffiliation made their decision after lengthy consideration, he said.

"You saw that church conference we were in. It was brutal. It was hard. People stay for hours. And they have a right to [decide]," he said.

Mark Tooley, president of the Institute on Religion and Democracy in Washington, D.C., and a supporter of disaffiliation, said disaffiliation agreements have been approved already in other conferences.

"So far, all the ones that have made it to annual conference have been pro forma," he said. "Generally the votes have been 95%+ [in favor of ratification]."

Earlier this year, Mueller asked Methodists to "demonstrate how Jesus enables us to have a heart of peace instead of a heart of war so that we are able to assume the best intentions of others, avoid attacking those 'on the other side,' respect the decisions congregations and individuals make, and refrain from recruiting individuals and congregations either to leave or remain."

It's a message he still believes in.

"Bishop Mueller continues to encourage a heart of peace for the entire discernment and disaffiliation process, and especially so for this special session before us," Arkansas Conference spokeswoman Amy Ezell wrote Friday.