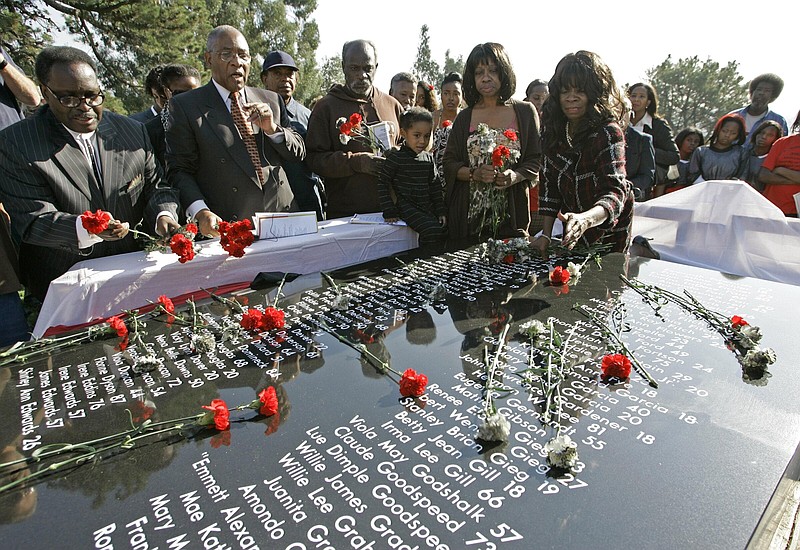 On the 30th anniversary of the mass suicide and homicide in Jonestown, Guyana, people gathered in Oakland, Calif., to dedicate a memorial in their memory. More than 900 people perished on Nov. 18, 1978, including dozens of Arkansas natives. (AP/Eric Risberg)

Forty-four years ago this week, hundreds of followers of the Rev. Jim Jones committed suicide or were murdered at Jonestown, Guyana, the community they had carved out of the jungles of South America.

The Jonestown Institute, a nonprofit group, is working to make sure that the memories are never erased.

The organization documents the history of the Peoples Temple and its followers, preserving their writings, recordings, photographs and other items as well as voluminous government records relating to the organization and the Guyanese settlement.

Much of the information is posted on their website: jonestown.sdsu.edu.

There are photos, family trees and updates.

It also has recordings of sermons by Jones, who was a Methodist and then a Pentecostal and then an ordained Disciples of Christ minister early in his ministry.

Eventually, he shifted his message from Christianity to himself and his own beliefs, including his vision for a new society free from oppression and injustice.

In the late 1970s, hundreds of Americans had flocked to South America's only English-speaking nation, drawn by Jones' vision. Some quickly grew disenchanted. Others were thrilled to be creating what they hoped would be a utopia free of racism, ageism and wealth inequality.

FEW, IF ANY, TRACES

Decades later, the jungle has reclaimed Jonestown. There are few, if any, traces remaining of the community and its vision of what Jones had labeled "Apostolic socialism."

"The purpose of our site is to humanize the people who died and also to honor and respect those who survived," said Fielding McGehee, the Institute's co-director.

Rebecca Moore, a Professor Emerita of Religious Studies at San Diego State University and McGehee's wife, is the other co-director.

Her sisters, Carolyn Layton and Annie Moore, were among the dead.

Because of its remote location, it took a while for people in the United States to learn about the Jonestown tragedy.

Early reports documented the deaths of outsiders: U.S. congressman Leo Ryan, a California Democrat who had flown to Guyana to check on the welfare of Peoples Temple members, was killed first, at an air strip in Port Kaituma, after visiting Jonestown.

The attack, which also claimed the lives of a Peoples Temple defector and three journalists, was captured on film by one of them -- NBC cameraman Bob Brown.

In the days that followed, the scale of the horror became apparent: more than 900 Jonestown settlers had died, most committing suicide by drinking Flavor Aid laced with cyanide.

A third were children or teenagers younger than 18. Many of the rest were elderly.

The bodies were returned to the United States. After resistance at other potential burial sites, Evergreen Cemetery in Oakland, Calif., agreed to provide a final resting place for more than 400 of them.

In the aftermath, McGehee and his wife heard the survivors' stories first hand.

"In the first 10 years, we talked to people [who] said, 'You know, I really loved it down there,"' McGehee recalled. "One woman, a good friend of ours who just died a couple of years ago, she said this was heaven on earth for her."

LOST EVERYTHING AND EVERYONE

Other survivors lost everything and everyone who mattered to them.

Of the people who perished, 374 had been born in California, where Peoples Temple was based, and 61 were from Indiana, Jones' home state, according to the institute.

Most of the other adults had been born in the South before heading west. Among the dead were 122 Texas natives; 54 Louisianans, 49 Mississippians and 41 Arkansans.

His book, "Back to the World: A Life After Jonestown," was published last year and details his family's journey from Detroit and rural Arkansas to California and, eventually, Guyana.

"She left Arkansas -- Blevins, specifically -- to have a better life," he said.

Peoples Temple treated elders as "repositories of knowledge" and demanded that they be respected, Smith said.

That appealed to Gibson, who was 72 at the time of her death.

Peoples Temple also provided its members with a sense of community and a support structure they could count on, he noted.

The safety net extended into other areas as well, McGehee said.

'GOT EVERYTHING STRAIGHTENED OUT'

"If you needed some medical assistance, if you needed to get to the doctor and you didn't have transportation, Peoples Temple would provide it to you. If your grandson had been arrested and was standing before a judge in night court, there was a lawyer from Peoples Temple standing next to that young man. If you were having problems with your welfare, or your or other benefits... it was a member from Peoples Temple, who went down to the office with you to make sure that everything got straightened out," he said.

Gibson had a deep interest in religion and attended Seventh Day-Adventist services, for a time.

"She was always searching," Smith said. "We had been nondenominational. We had been Catholics, we had been Baptists, we had the Jehovah's Witnesses. And there were more."

Eventually, she settled on Peoples Temple, ultimately immigrating to Guyana.

"She wanted peace, whatever that peace was," Smith said. "I'm not sure she ever found it."

Today her name is carved into a memorial at Evergreen Cemetery, along with the names of more than 900 others. 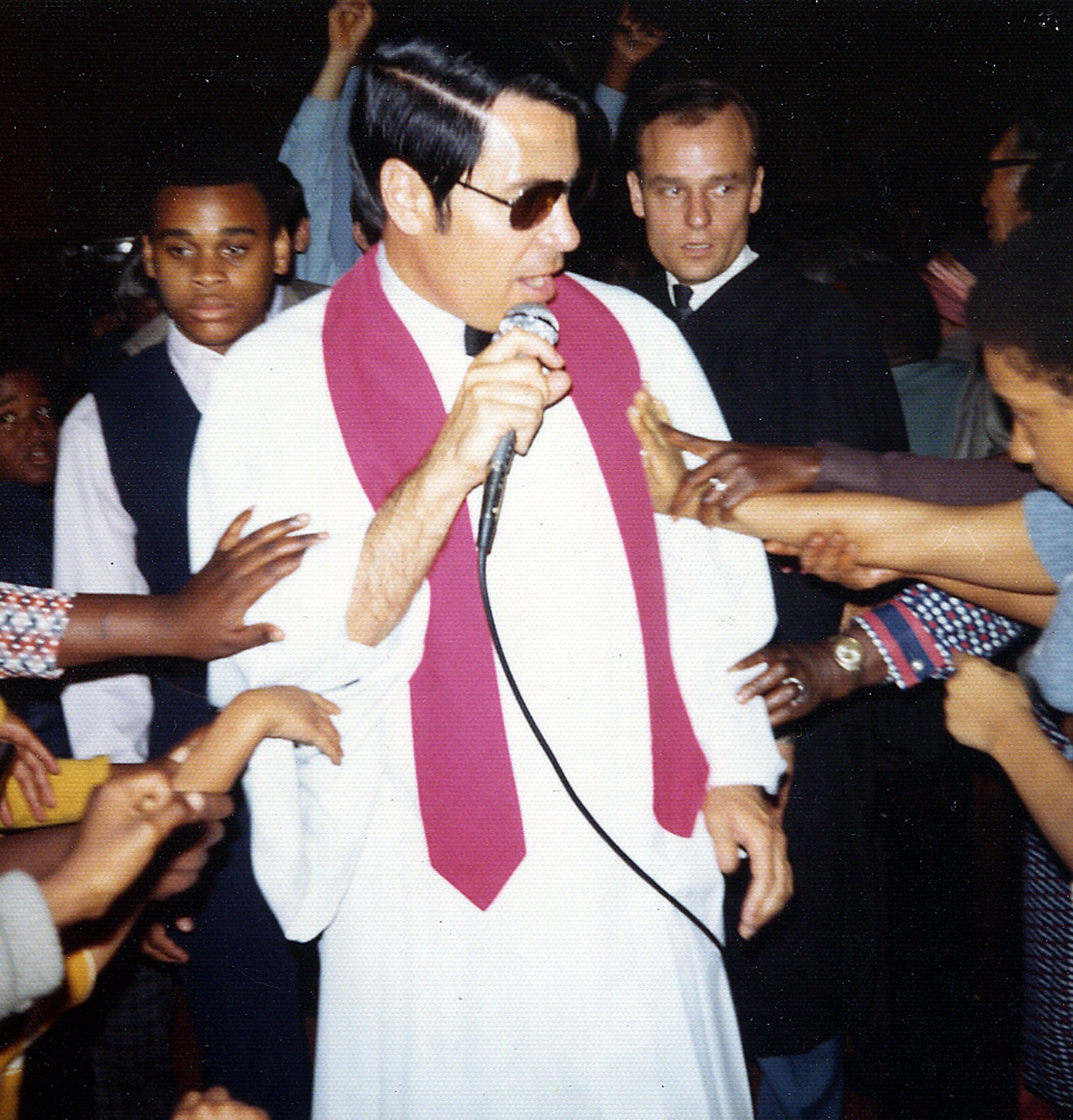 The Rev. Jim Jones, founder of Peoples Temple, advocated “apostolic socialism” and, eventually, “revolutionary suicide.” After founding Jonestown, Guyana, he convinced hundreds of his followers to take their own lives. (AP/California Historical Society)