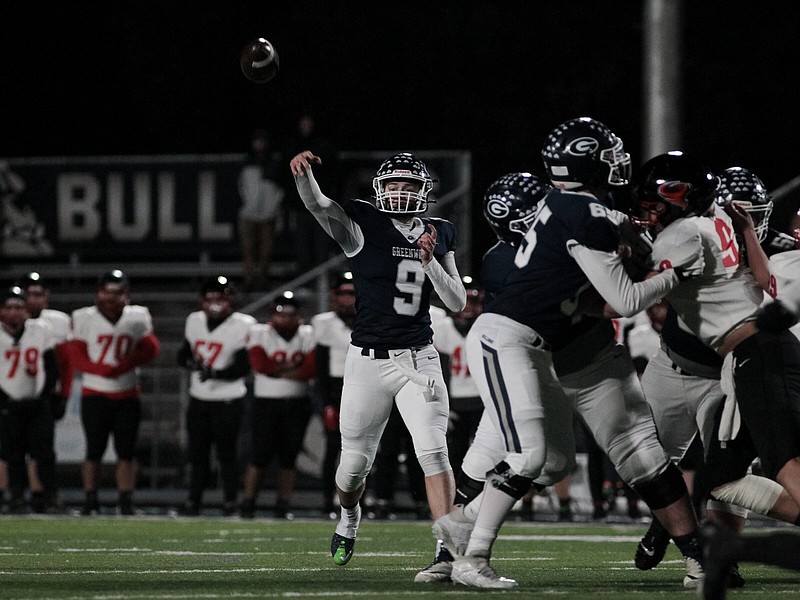 Greenwood quarterback Hunter Houston completed 26 of 33 passes for 326 yards and 4 touchdowns to help lead the Bulldogs to a 42-7 win over Russellville in the Class 6A quarterfinals Friday night in Greenwood. The Bulldogs will host Benton in the semifinals Friday night. (Special to the NWA Democrat-Gazette/Shane Cossey)

GREENWOOD -- A bye week did wonders for Greenwood.

After allowing 49 points in the regular-season finale, the Greenwood defense pitched a shutout in the first three quarters of a 42-7 victory over Russellville in the Class 6A quarterfinals Friday night at Smith-Robinson Stadium.

"You are always worried when you get a bye, but we were banged up [after a 49-35 loss at Little Rock Christian on Nov. 4]," Bulldogs Coach Chris Young said. "The bye week was good for us because we got some guys healed up, especially those guys on defense. Our defense was awesome tonight."

Greenwood (9-2) will host Benton in next week's semifinal matchup. The two schools were previously in the 6A-West together, so the matchup is a familiar one for the Bulldogs.

"I am so excited to be in the semifinals again, but I am more excited to spend another week practicing with these seniors," Young said. "I have not seen Benton this year, but we know them. We are going to enjoy this win for now and then we will get to work."

"Coach [Jason] Gill and his staff did a heck of a job the last two weeks preparing for this game, and the kids played outstanding," Young said. "[The defense] set the tone tonight. We had a couple of turnovers and some penalties on offense in the first half and the defense just stopped them again."

The Greenwood offense, though, was not slouch in the first half, scoring 34 points despite the two turnovers and 55 yards in penalties.

Hunter Houston also had a big first half as the senior was 24-of-30 passing for 302 yards while accounting for 5 touchdowns (4 passing, 1 rushing). Houston finished the game 26 of 33 for 326 yards and 4 touchdowns. Receiver L.J. Robins was Houston's big target with 8 catches for 164 yards and 3 touchdowns.

"Other than the pick, I thought Hunter played well tonight," Young said. "He was awesome tonight leading the offense."

Running back Brayedan Davis came off the bench to rush for 93 yards on 9 carries, including a 31-yard touchdown run with 10:01 left in the third quarter to give Greenwood a commanding 42-0 lead.

"He was physical and had great vision running the ball tonight," Young said. "He's been hurt most of the season, but he has finally gotten healthy for the first time this season. I think you will see some more of him [next week]."

Greenwood scored on six of its first eight possessions to seize control.

Houston opened the scoring with a 2-yard keeper to cap a 44-yard drive after a Nelms interception for a 7-0 lead with 5:29 left in the first quarter.

Houston then hit Isaiah Arrington for a 36-yard touchdown pass late in the first quarter for a 14-0 lead.