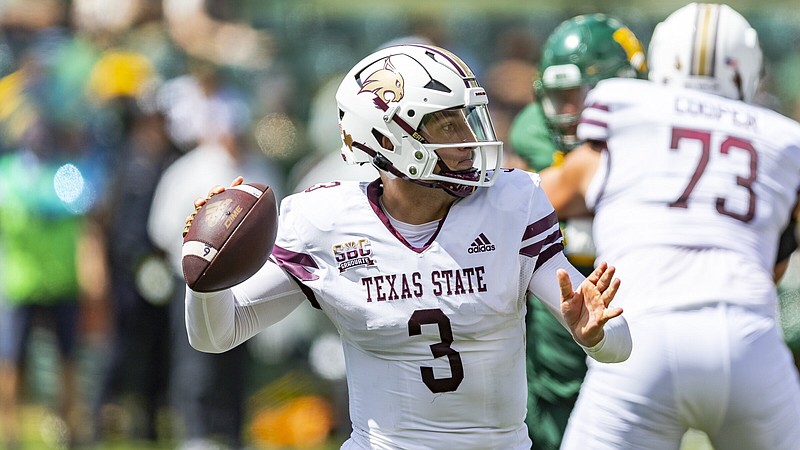 Layne Hatcher is in his first season as Texas State’s quarterback after transferring from Arkansas State. The former Pulaski Academy star will face the Red Wolves today in San Marcos, Texas. (AP/Brandon Wade)

Arkansas State Coach Butch Jones said he didn't want it to be the storyline of the week.

His Texas State counterpart, Jake Spavital, said he hadn't specifically talked about it with his guys.

There's plenty of weirdness to it all -- the "it" being that the Bobcats' starting quarterback and leading rusher were on the opposite side of this budding rivalry, which will continue today at Bobcat Stadium in San Marcos, Texas

It's not just that Layne Hatcher and Lincoln Pare were Red Wolves. Both were faces of ASU's program.

"I respect everyone's choices and decisions," Jones said when asked about the difficulty of losing leaders in the early stages of building a program. "Everyone is going to do what they feel is best for them in their career and playing time and all that moving forward."

Pare only spent two seasons in Jonesboro, totaling 905 rushing yards. But 5-9, 195-pound tailback was a news-conference regular, speaking to reporters even in the lowest of the Red Wolves' many lows in 2021.

"It's got to be kind of an awkward deal for those guys at times," Spavital told reporters at his weekly news conference Tuesday. "But these are the times we're living in right now with college football. ... I try not to make it a distraction and make it like, 'Hey, this is all about Layne and Lincoln,' but it already means a ton to those guys.

"I bet you they're going to have a lot of butterflies...because they sacrificed a lot for Arkansas State."

With both teams at 3-7, neither remains in the mix for a potential bowl bid. At the same time, today's loser is guaranteed to finish last in the Sun Belt Conference's West Division.

It was a fate that was sealed for the Red Wolves in last year's meeting with Texas State on the season's final day.

Like ASU, the Bobcats come into the game with injury concerns. Spavital said his team is down to five scholarship wide receivers. The Red Wolves are somewhat healthier than prior to their bye week, but it remains to be seen who will be available at cornerback outside of Kenneth Harris and running back Brian Snead carried just once last week.

Another commonality shared is that neither has experienced a winning streak for a while. ASU's span without one dates back to 2020 whereas Texas State hasn't won consecutive contests since early 2019.

Given that both teams will play just once more after this weekend, the only way for either to potentially carry a winning streak into 2023 is to win today .

"We always talk about road toughness," safety Justin Parks said. "We've got to just not be too high, too low -- we've just got to be even-keeled."