Parched earth frames the remainder of a tributary Oct. 31 on a dried arid stretch of the Poyang Lake in north-central China's Jiangxi province. (AP/Ng Han Guan)

BEIJING -- To cushion the impact of extreme weather due to climate change, a Chinese landscape architect has been making the case for China and other countries to create so-called "sponge cities."

Yu Kongjian, who spoke to The Associated Press in Beijing, uses sweeping language to express his vision for cities that can withstand variable temperatures, drought and heavy rainfall. The challenges for implementing this vision at a time of ambitious economic development in China are multifold.

Yu criticizes much of Asia's modern infrastructure for being built on ideas imported from Europe, which he says are ill-fitted to the monsoon climate over much of the Asian continent. He points to recent floods that have wreaked havoc in many Asian cities, which he says are caused by this architectural mismatch.

"There's no resilience at all," Yu says of the concrete and steel infrastructure of major cities, and of using pipes and channels to funnel away water. "Those are useless; they will fail and continue to fail."

Instead, Yu proposes using natural resources, or "green infrastructure" to create water-resilient cities. It's part of a global shift among landscape design and civil engineering professionals toward working more in concert with the natural environment. By creating large spaces to hold water in city centers -- such as parks and ponds -- stormwater can be retained on site, helping prevent floods, he says. Sponge infrastructure also, in theory, offers ways for water to seep down and recharge groundwater for times of drought.

"The idea of a sponge city is to recover, give water more space," Yu said.

A turning point in China's awareness of climate change and urban adaptation came a decade ago, Yu said. A devastating flood hit the capital city of Beijing in July 2012.

Yu at the time sent a letter to Beijing's party secretary, Guo Jinlong, calling for a change in how the government approaches city infrastructure. He continued to send letters to high-ranking officials and top leadership, including China's leader Xi Jinping.

At a government working conference the next year, China incorporated the idea of sponge cities as a national strategy, "giving full play to the absorption, storage and slow release of rainwater by ecological systems."

The following year it launched 16 pilot sponge city projects, adding 14 more in 2016. Officials also said they would award $83 million each year for three years to municipal cities, $70.5 million to provincial capitals and $56.4 million to other cities.

The top-down mandate and subsidies spurred a boom in water-absorbing infrastructure, including in large cities such as Beijing, Shanghai and Shenzhen.

Cities around the world are similarly trying to integrate "bioswales" along the sides of roads, protect remaining marsh areas to absorb water and increase the capture of roof rainwater.

In China, one demonstration park is located in the northeast corner of the city of Nanchang, southern China. In mid-October, engineers were putting finishing touches on a lush, picturesque 126-acre park designed to cushion the impact of both floods and droughts.

Formerly a coal ash dump site, the "Fish Tail" sponge park is built in a low-lying section of the city and intended to regulate water for surrounding neighborhoods and business districts. The fly ash, a byproduct of coal combustion, was mixed with soil to create mini-islands in the lake that allow water to permeate. Fang said the mixture, held in place by plant roots, prevents the ash from flowing into the water.

During dry periods, the water could be withdrawn, purified and used for plant irrigation.

Fang Yuan, an engineer at Yu's design institute, Turenscape, said the park serves as "an ecological aquarium," capable of retaining 264 million gallons of water during floods and means the water can be used, instead of just discharging it into the sewage system.

The park also serves as a habitat for plants and wildlife disrupted by extreme weather such as drought.

At times, the sponge city concept has been difficult to implement in China. Misallocation of funds, lack of expertise in sponge city planning and other snags have doomed some projects.

In April, the Ministry of Housing and Urban-Rural Development announced some cities had "insufficient awareness, inaccurate understanding, and unsystematic implementation of sponge city construction."

The notice also warned against using funds earmarked for sponge city construction for other general infrastructure projects, such as buildings and roads.

Those guidelines were issued after massive rainfall and catastrophic floods in the city of Zhengzhou killed 398 people last summer. Floodwater inundated a section of the city's subway, trapping hundreds of commuters. Rescuers flocked to the scene, but 14 people died in the subway disaster.

Notably, Zhengzhou was one of the pilot sponge cities, with a planned investment of $7.4 billion. Some questioned whether sponge city projects work at all.

But an investigation by the State Council released in January found that funds had been misspent. Only 32% of the $2.8 billion that was invested went to what the government defined as sponge city concepts.

"Even at the critical moment when the whole country mobilized forces to support Zhengzhou's rescue and disaster relief, they were still 'building flower beds,'" the State Council report said.

Yu acknowledges there is an oversight problem. "Many of the cities just use it as propaganda -- just to get a lot of money from the central government," but then invest the funds in other projects.

In the village of Tangtou, on the lake's normally water-blessed northeast corner, residents scooped buckets of water from a village pond to tend their vegetables.

Since July, villagers say they've hardly seen any rainfall, let alone water in their corner of the lake.

"The whole lake was completely dry, and even the Yangtze River was dry," said 73-year-old Duan Yunzhen, as he scattered pond water onto his crops.

"We planted rice, cotton, sesame and sweet potato -- they are all suffering from drought," said 62-year-old Hong Zuhua. 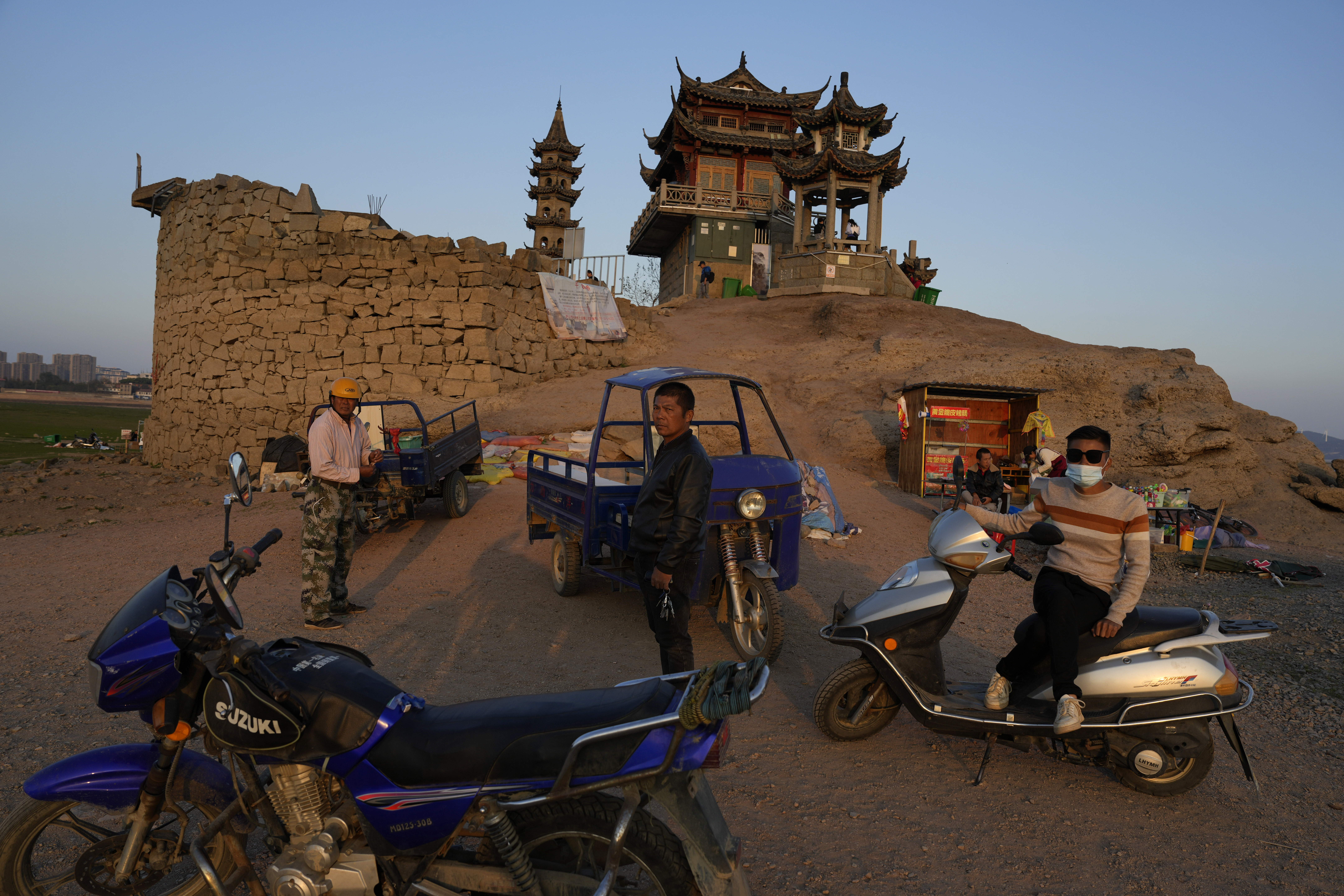 Residents gather Oct. 31 at the base of Falling Star Mound that is normally surrounded by the waters of Poyang Lake but is exposed during drought season in north-central China's Jiangxi province. (AP/Ng Han Guan) 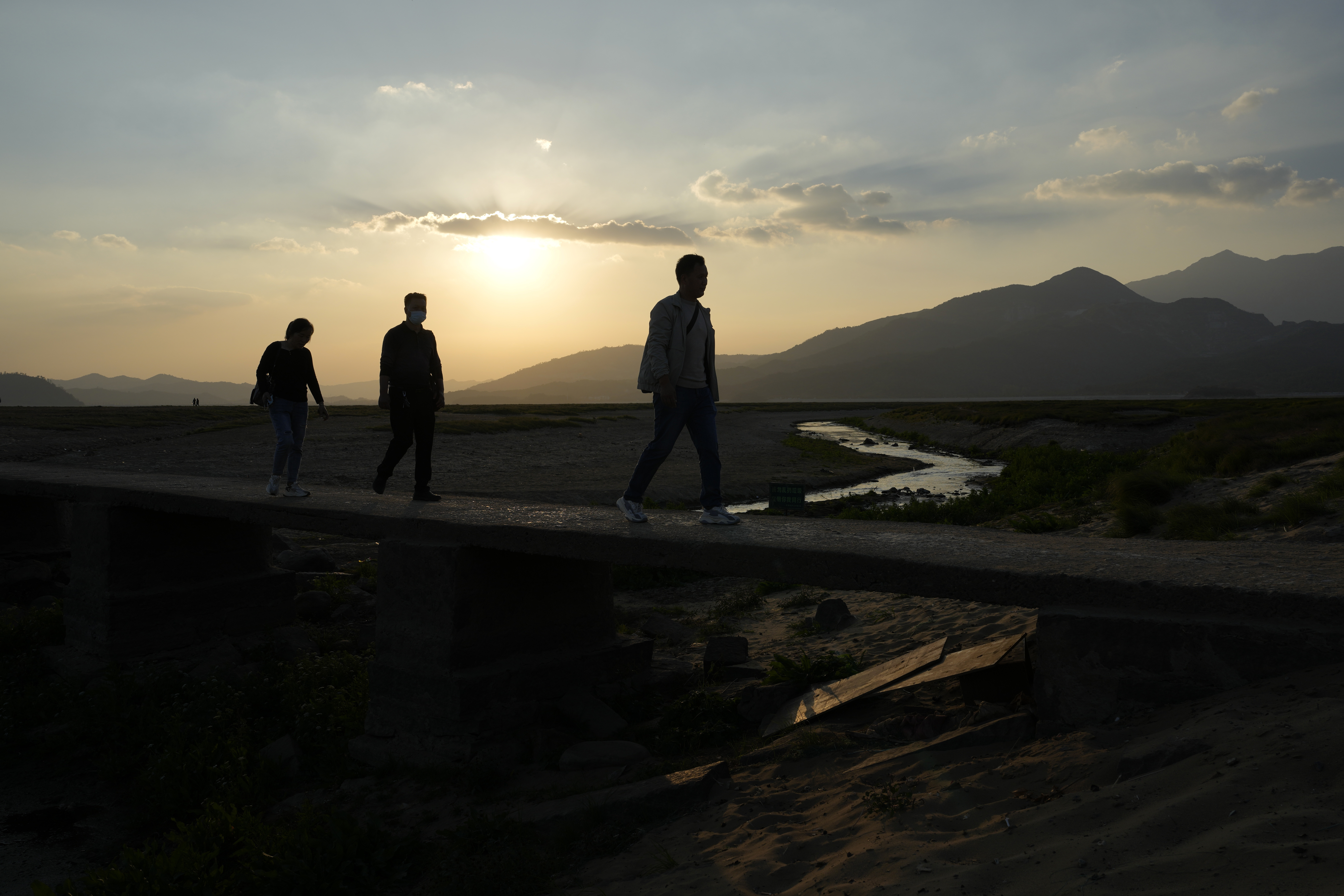 Residents walk Oct. 31 along a stretch of dried up Poyang Lake as the sun sets in north-central China's Jiangxi province. (AP/Ng Han Guan) 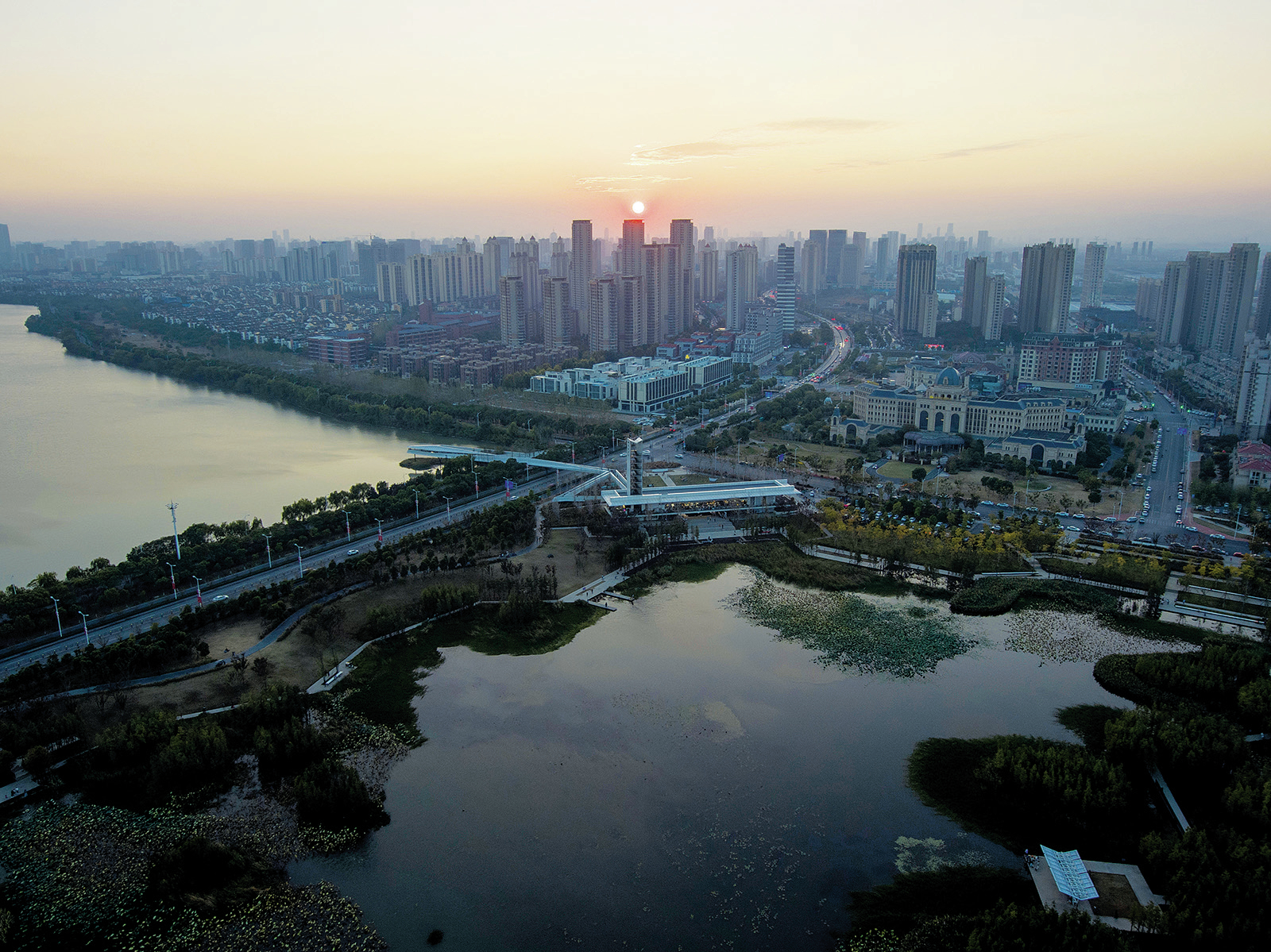 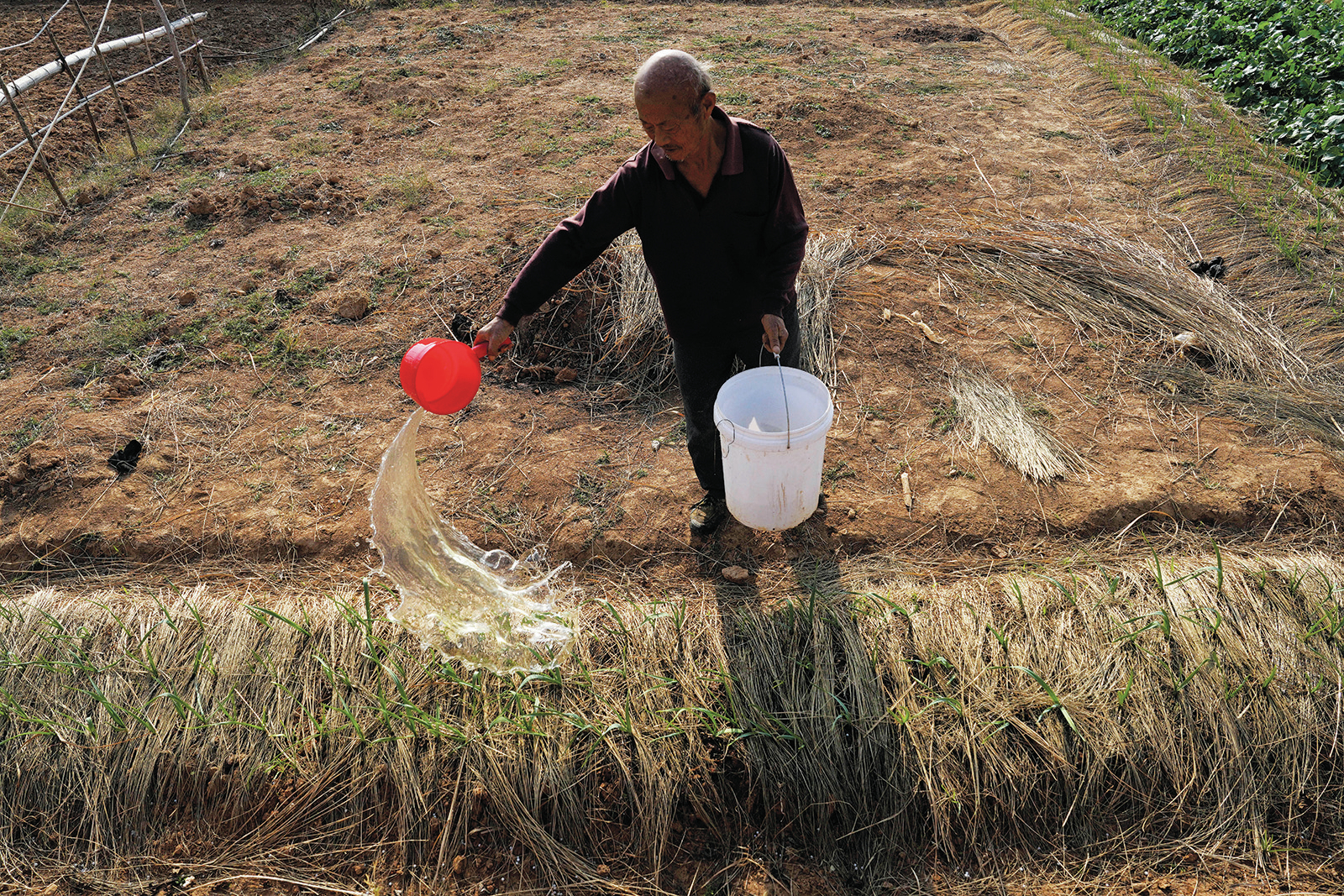 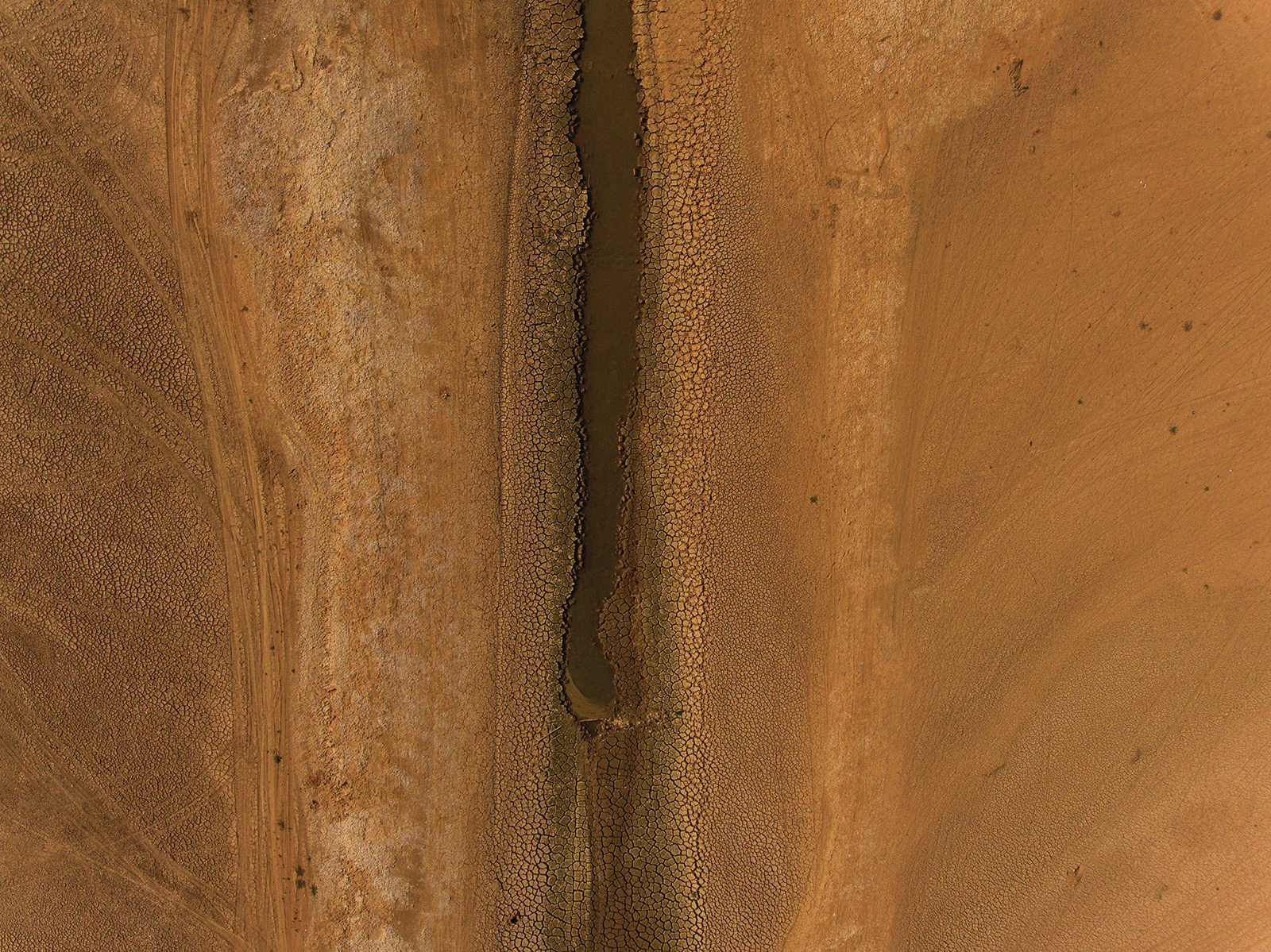 Cracked earth is visible Oct. 31 at a tributary leading into the dried arid stretch of the Poyang Lake in north-central China's Jiangxi province. (AP/Ng Han Guan) 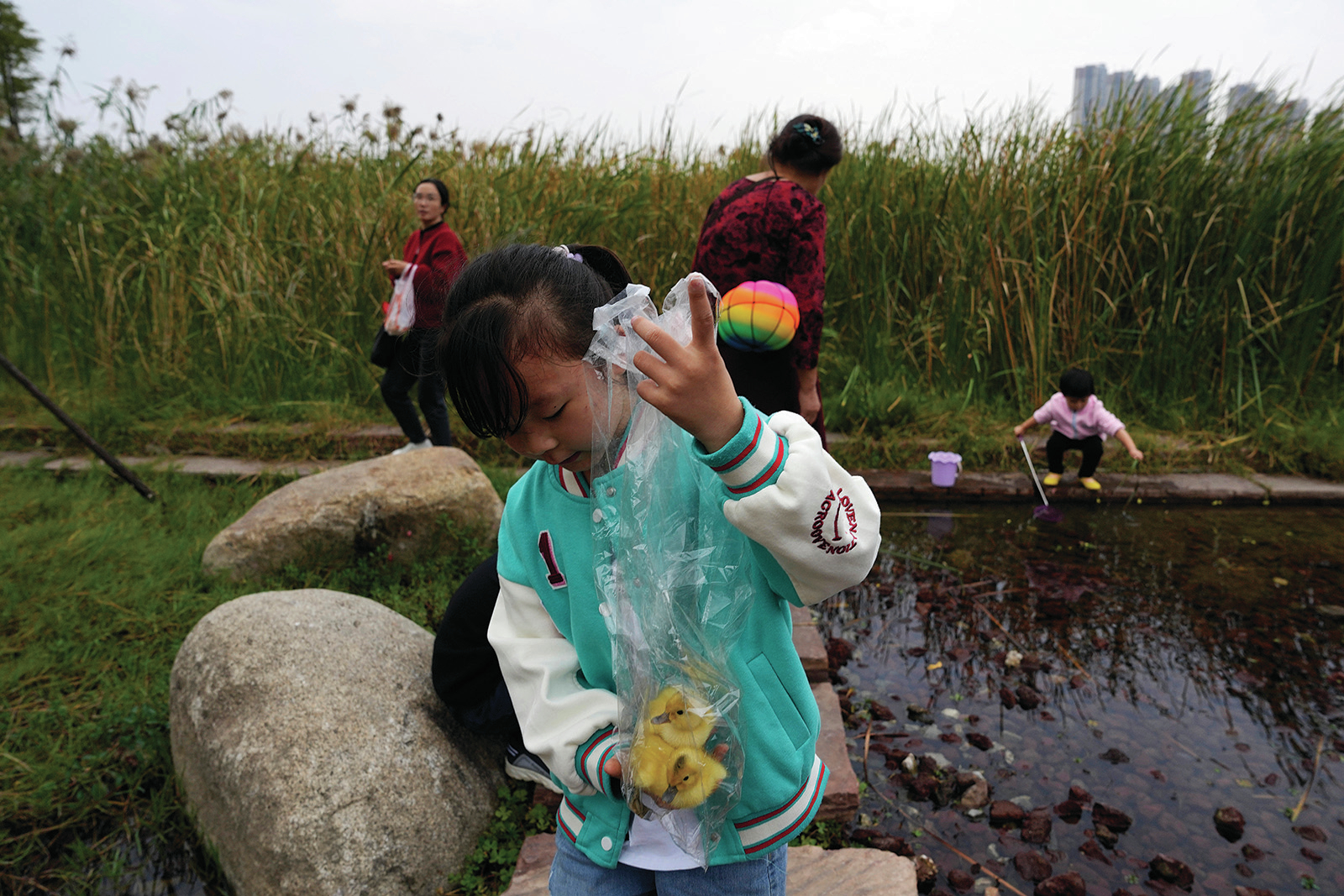 A child holds up a plastic bag containing baby ducks Oct. 29 as she walks past a pond and plants at the "Fish Tail" sponge park built on a former coal ash dump site in Nanchang in north-central China's Jiangxi province. (AP/Ng Han Guan) 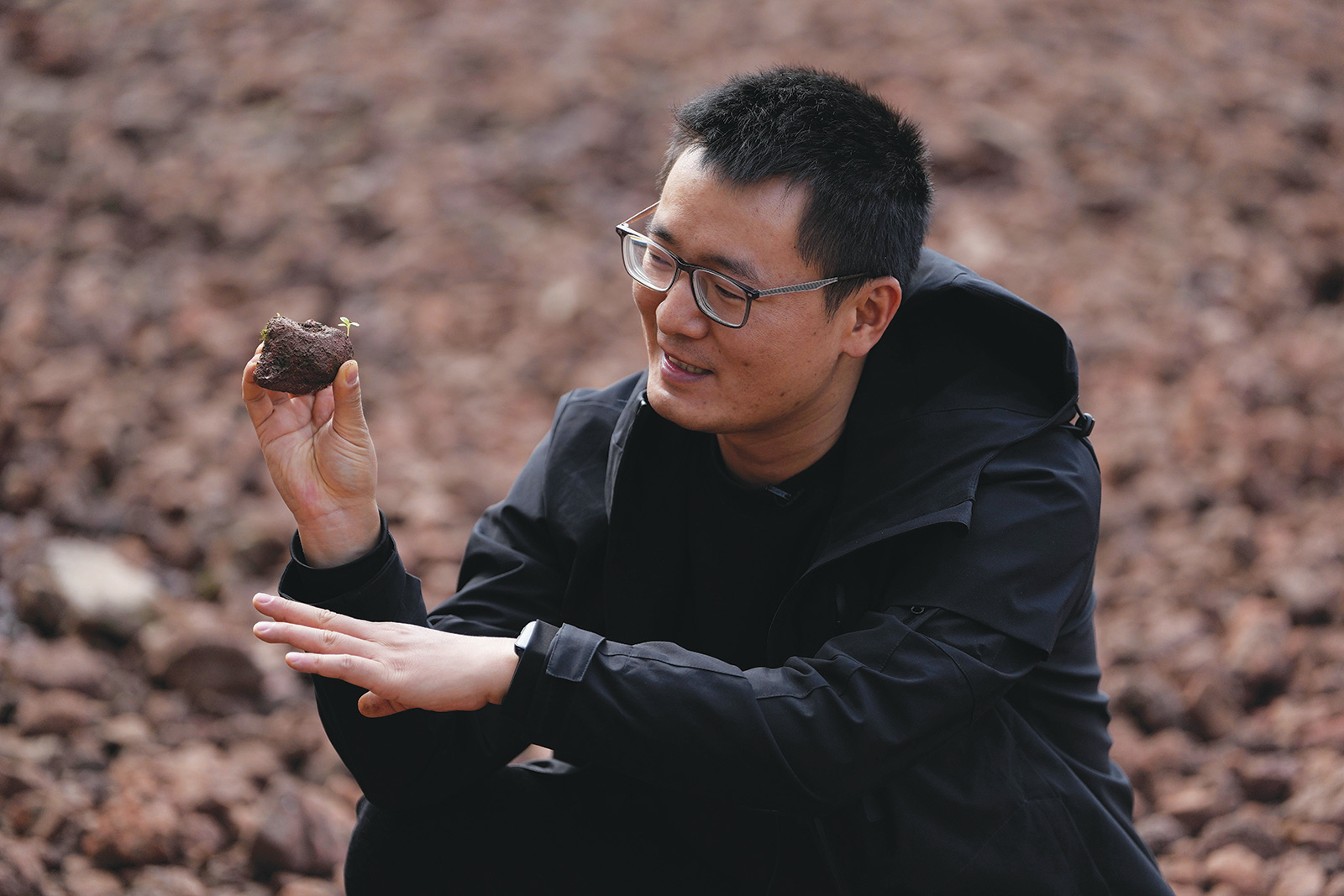 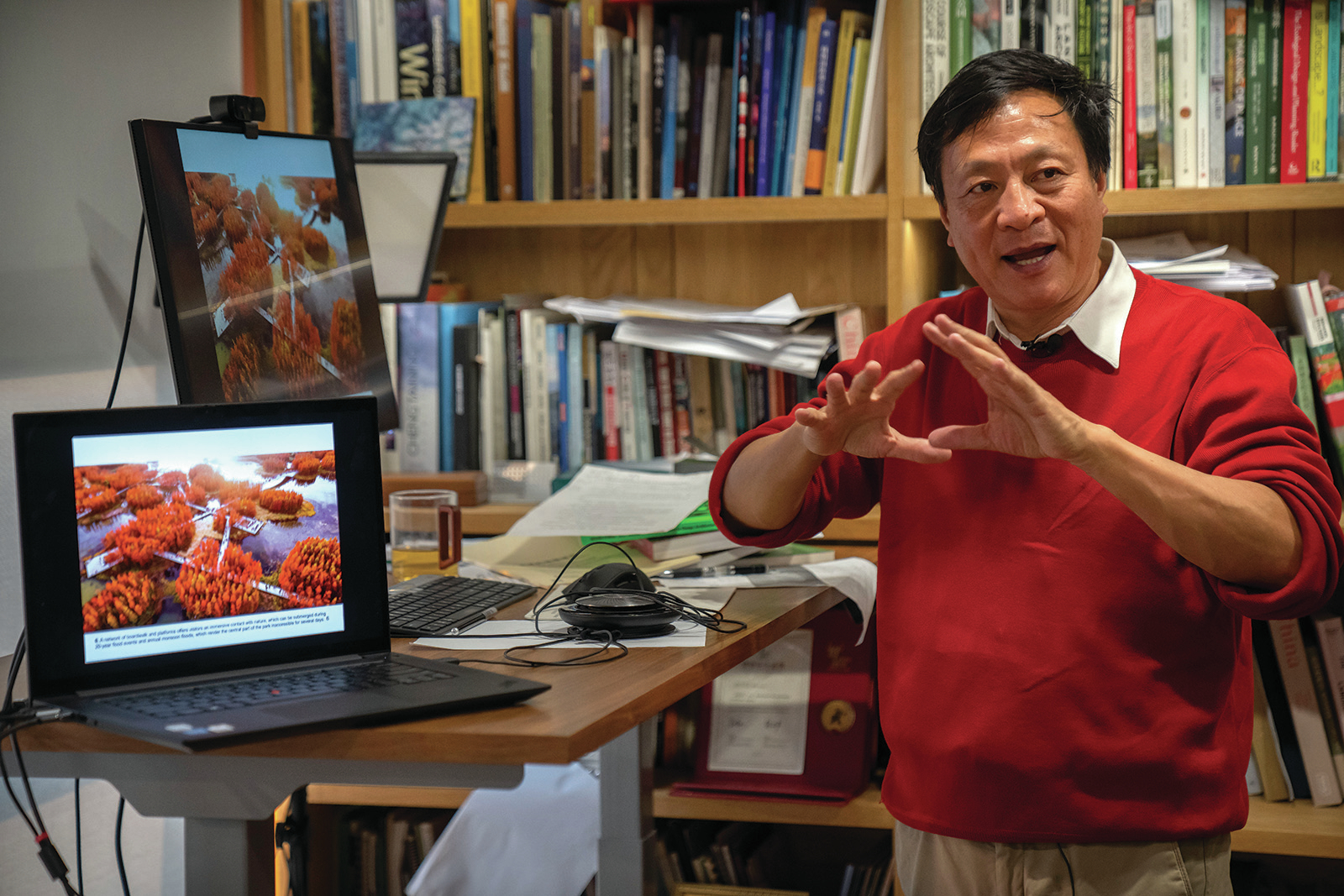 Architect Yu Kongjian speaks Oct. 21 during an interview at his firm's office in Beijing. (AP/Mark Schiefelbein) 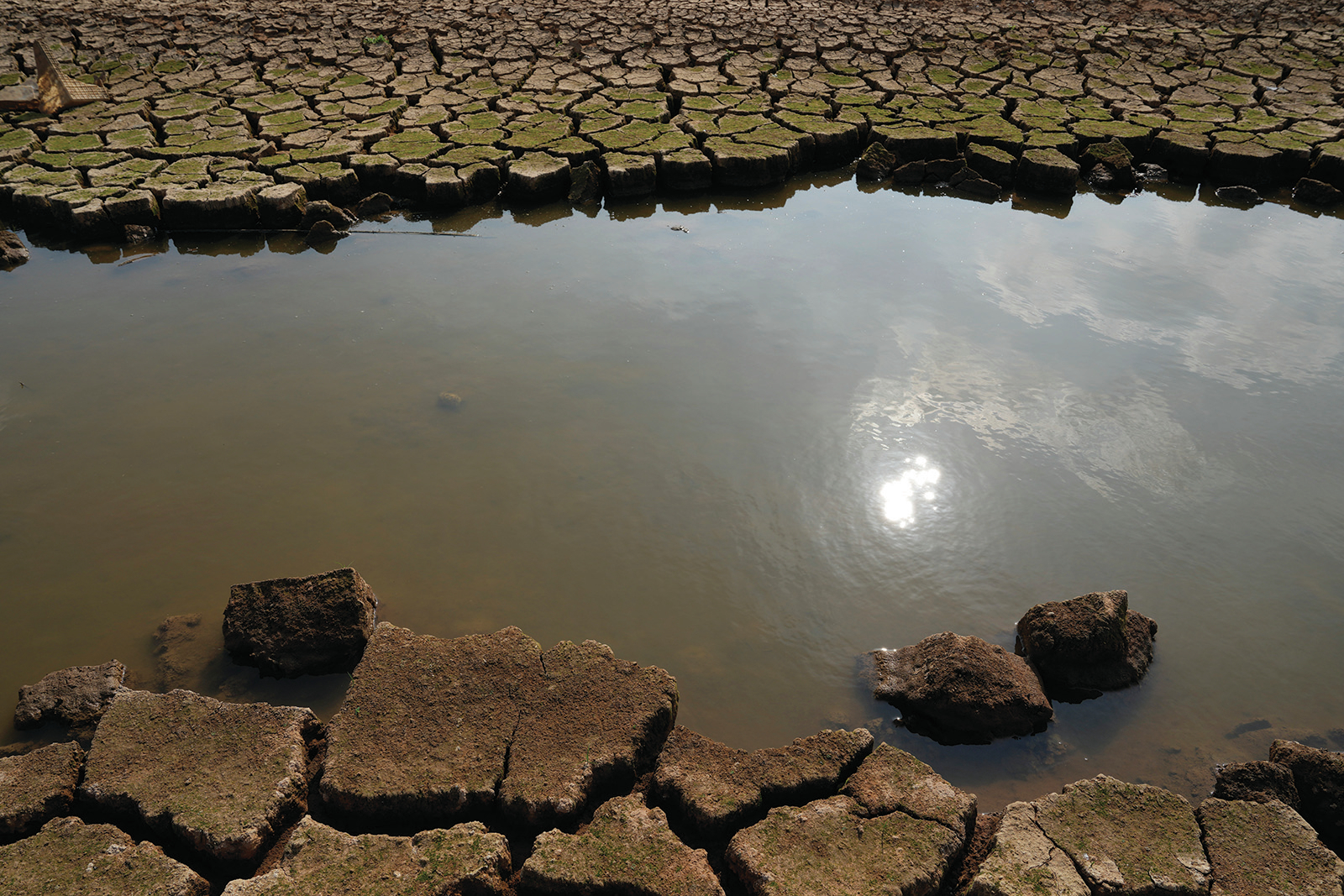 Parched earth frames the remainder of a tributary Oct. 31 on a dried arid stretch of the Poyang Lake in north-central China's Jiangxi province. (AP/Ng Han Guan) 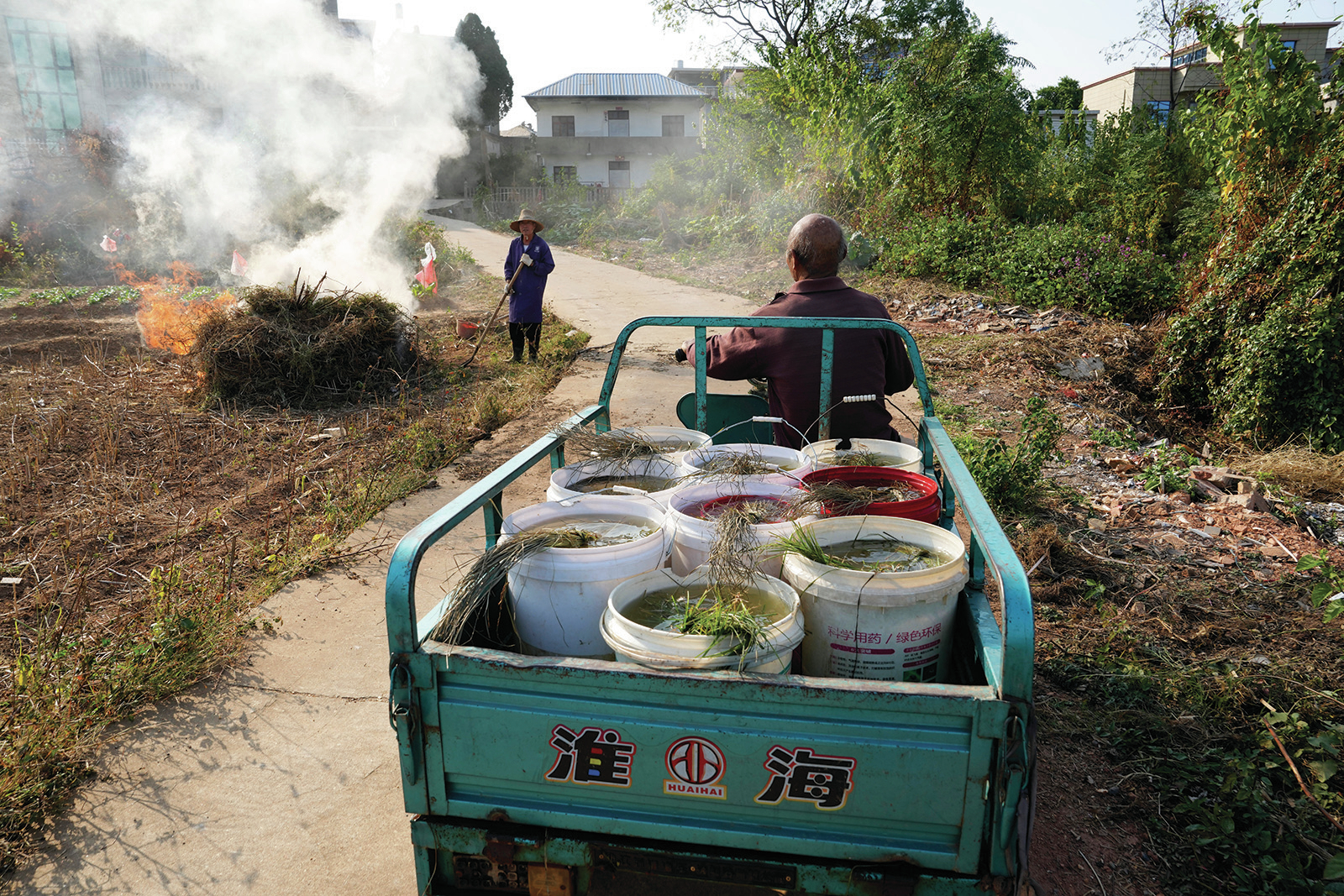