3 men sway election board on counting-machine claim by BOB CHRISTIE The Associated Press | November 20, 2022 at 3:07 a.m. 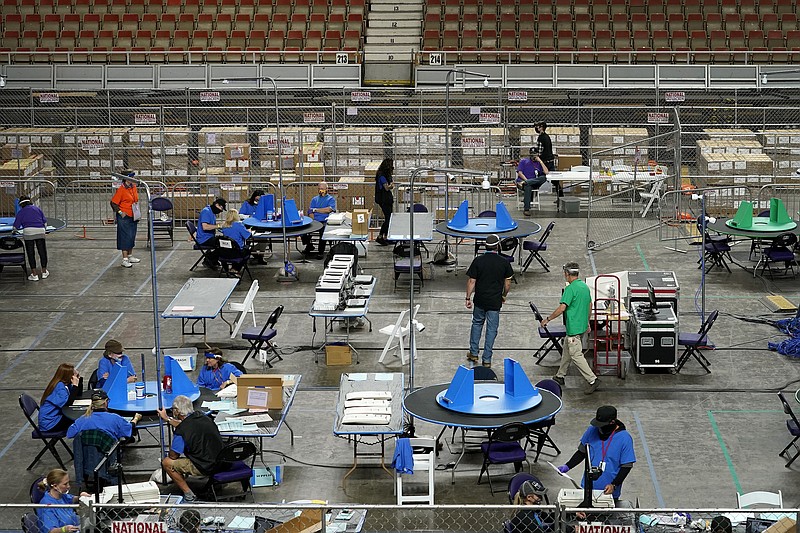 FILE - Maricopa County, Ariz., ballots cast in the 2020 general election are examined and recounted by contractors working for Florida-based company, Cyber Ninjas, in Phoenix on May 6, 2021. At least one recount will be on tap in Arizona after the counting from the Nov. 8, 2022, midterm elections ends. Once Arizona's counties certify their results in the coming days as scheduled, a recount will be triggered in at least one statewide race. (AP Photo/Matt York, Pool, File)

PHOENIX -- The board overseeing a southeastern Arizona county whose Republican leaders had hoped to recount all Election Day ballots delayed certifying the results of this month's vote after hearing Friday from a trio of men who claimed counting machines were not certified.

The three men, or some combination of them, have filed at least four cases raising similar claims before the Arizona Supreme Court since 2021 seeking to have the state's 2020 election results thrown out.

The court has dismissed all of them for lack of evidence, waiting too long after the election was certified or asking for relief that could not be granted. But Tom Rice, Brian Steiner and Daniel Wood managed to persuade the two Republicans who control the Cochise County board of supervisors that their claims were valid enough for them to delay the certification until a Nov. 28 deadline.

They claimed the U.S. Elections Assistance Commission allowed certifications for testing companies to lapse and that voided the certifications of vote tabulation equipment used across the state.

That came despite testimony from the state's elections director that the machines and the testing company were indeed certified.

"The equipment used in Cochise County is properly certified under both federal and state laws and requirements," state Elections Director Kori Lorick told the board. "The claims that the SLI testing labs were not properly accredited are false."

GOP board member Tom Crosby also defended a lawsuit he and fellow member Peggy Judd filed against the county elections director earlier this week seeking to force the hand-count. They dropped the case against Lisa Marra on Wednesday.

"If our presenters' request is met by the proof that our machines are indeed legally and lawfully accredited, then indeed we should accept the results," Crosby said. "However, if the machines have not been lawfully certificated, then the converse is also true. We cannot verify this election now."

Crosby and Judd then voted to delay certification, with Crosby saying he believed Wood, Steiner and Rice needed to be provided proof since they were "the experts."

Democratic Supervisor Ann English was powerless to overrule them.

The delay potentially jeopardizes state certification, set for Dec. 5, and at least one statewide recount.

Lorick issued a statement after the vote vowing legal action to force the board to accept the results. Under Arizona law the formal election canvass can't be changed by the elected county boards.

Their only role is to accept the numbers as they are tallied by their elections departments.

"If they fail to do so, the Secretary [of State] will use all available legal remedies to compel compliance with Arizona law and protect Cochise County voters' rights to have their votes counted," Lorick said.

All 15 Arizona counties face the same Nov. 28 deadline, but there is no sign others are considering similar defiance.

Once the state certifies the results Dec. 5, there will be a recount in at least one statewide race.

The contest between Republican Abraham Hamadeh and Democrat Kris Mayes for attorney general, is so close that a recount is certain. As of Friday night, Mayes was less than 600 votes ahead with fewer ballots remaining to be counted than the margin for a mandatory recount, which will be about 12,500 votes.

Another statewide race also is within the margin for a recount, but incumbent Superintendent of Public Instruction Kathy Hoffman conceded Thursday to Republican Tom Horne. Horne, a former schools chief who served two years as attorney general, was more than 9,000 votes ahead on Friday.

He criticized Hoffman for embracing progressive teaching and promised to shut down any hint of "critical race theory," which is not taught in state schools.

Judd said Wednesday she would move to clear the way for the state recount.

"We've had to step back from everything we were trying to do and say, 'OK, we've got to let this play out,'" Judd told The Associated Press. "Because it's the last thing we want to do to get in [Marra's] way."

There has been no evidence of widespread fraud or manipulation of voting machines in 2020 or during this year's midterm elections.

Arizona recount laws were changed this year. The previous margin for a mandatory recount was one-tenth of 1%. It is now 0.5%.